Bankwatch’s coordinator in Serbia Zvezdan Kalmar finds himself in a situation similar to the one when campaigning on the Gazela bridge project: Roma families live in uncertainty about when they’ll be resettled to make way for road construction, all the while with little influence about how decisions are made. 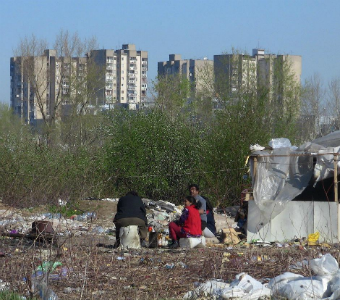 On June 5, I visited one of the largest informal Roma settlements in Belgrade called Buvljak. Just a few hundred metres from the European Investment Bank’s (EIB) regional office in Southeast Europe, Buvljak is home to more than 200 families.

To make way for roads connected to a new bridge over the Sava, 73 families are planned to be resettled and their homes torn down. The access roads to the Sava bridge are financed by the EIB, which has committed 160 million euros. The actual bridge was constructed with financial support from the European Bank for Reconstruction and Development (EBRD).

The purpose of my visit to Buvljak was to monitor how well Belgrade authorities and the EIB are involving the people at Buvljak in the decision-making process about the resettlements.

I know from previous experiences that excluding the people affected by resettlement from the decision-making process will lead to poor results. As part of reconstruction works on the Gazela bridge (financed by the same two banks above), in August 2009 about 170 families have been forcefully resettled, some to remote areas without access to work. At least 10 families were forced to return to Belgrade, some of them now living in Buvljak, since they weren’t able to make a living outside of Belgrade. Many of those who used to live at Gazela still haven’t found work in their new homes, and uncertainty and stress have led to tensions in some of the new settlements. [1] (You can see details in Bankwatch’s photo and video blog Out of Sight, on the Gazela resettlement.)

The Buvljak inhabitants confirmed our fears about a lack of public participation. I learnt from them that in April, they had been given a few options about resettlement. The proposed areas are far removed from Buvljak and the places where Roma in Belgrade usually are able collect and recycle waste, which is how many make a living. Even worse, the proposed locations include a site next to a dirty and polluting mine complex and coal power plant, another is in the wetlands, another near a cemetery, and others are in areas well known for racial hostilities and previous attacks on Roma.

All the proposed locations are far from urban infrastructure, healthcare facilities, public transport lines, which shows clearly that the resettlement as it is planned will marginalise the Roma communities even further.

The plan is also to group all of the houses in sequential blocks which would place Roma together and at the same time isolate them from the rest of the community. Despite the housing blocks, neighbours that cooperate together to get by in Buvljak might be separated when resettled, a prospect Buvljak inhabitants want to avoid.

Integration at the new locations is the main concern for people in Buvljak. So far they haven’t seen the actual resettlement locations that are being proposed nor have they spoken to anybody in these communities. Such an arrangement is crucial before the people from Buvljak give consent to be relocated and is an important step towards integration in the new communities. Unfortunately such measures seem irrelevant to the Belgrade authorities and developers.

When calling on the banks to withdraw from such controversial investment projects, the EIB and EBRD often claim that their involvement means that at least minimal standards will be followed. But as the Gazela resettlement shows, this will not happen automatically. While I find myself again calling on the banks to make sure the rights of Roma are being respected, those in Buvljak live in a state of uncertainty about their future.

Image: One of the families from Gazela that now lives in Buvljak. Taken from http://outofsight.tv

1. Interview with one of residents of Barajevo settlement, located on the outskirts of Belgrade, which is one of 5 new settlements of Gazela inhabitants.