At the end of May the whole of Europe will be going to the ballot box for the 2014 European Parliament elections. But when the votes are counted and members-to-be (MEPs) take their place, who are they going to represent – people or profit? The Bankwatch supported campaign Politics for people asks them to take a pledge against the latter. 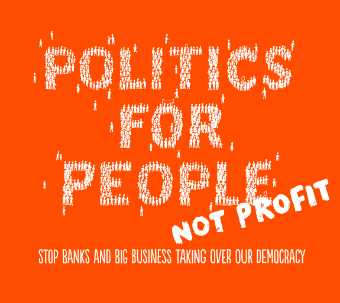 This article was cross-posted from the Corporate Europe Observatory website with kind permission.

CEO, as part of the Alliance for Lobbying Transparency and Ethics Regulation (ALTER-EU), has launched a campaign asking election candidates to take a pledge: “to stand up for citizens and democracy against the excessive lobbying influence of banks and big business”. Many current MEPs from across the political spectrum have already done so, and with the help of organisations and activists from all corners of Europe, we aim to have hundreds of future MEPs joining them.

The opening preamble of the Lisbon Treaty confirms the “inalienable rights of the human person, freedom, democracy, equality and the rule of law”. Fine words of course, but too often and on too many issues, the European Union’s so-called democracy works for business, not for people.

Increasingly, the corporate lobby in Brussels is large, active, well-funded, well-connected and, as a result, is able to leave its fingerprints over a large proportion of the legislation that comes out of the EU. And if you consider that as much as 50 per cent of our domestic laws now originate in Brussels, the direct impact on our lives of corporate Europe is considerable.

Through the pledge campaign, more than 65 groups from approximately 20 European countries are working together to make sure that in the next Parliament MEPs will not only be aware of the problem of corporate lobbying but will take action to curb it. Citizens will be able to ask their future MEP to sign the pledge via the new website – www.politicsforpeople.eu – which will be available in 11 languages. As well as case-studies on how corporate lobbying has undermined public interest policy-making, it will also provide regular graphic visualisations of who has and hasn’t signed the pledge across Europe.

Local groups are organising all sorts of activities at national level to raise public awareness in the run up to the elections, including debates with candidates, speaker tours and media stunts. Having candidates sign the pledge can create a quorum of MEPs in the next parliament committed to tackling corporate lobbying, but ensuring the influence of corporate lobbying in Brussels and its negative impact on democracy becomes a national election topic means these MEPs are far more likely to turn their pledge into action. And perhaps more importantly, it links local or national movements and struggles to the seemingly-technocratic EU and breaks through what sometimes feels like an impenetrable barrier between the Brussels bubble and issues affecting communities on the ground. Fighting new fossil fuel projects, austerity policies or the push by agribusiness for genetically modified organisms (GMOs) are all influenced by corporate lobbying in Brussels.

The recent proposal from the European Commission to tackle climate change has been gutted by lobbying from the fossil fuel industry, providing a serious barrier to local efforts to move away from dirty fossil fuels and transform our energy system and society. Instead the plans give a green light to the socially and environmentally damaging practice of ‘fracking’, the process of extracting hard-to-reach natural gas through hydraulic fracturing that is being championed by Big Oil as the new energy frontier (a view unfortunately also shared by many governments).

While Europe is still in the middle of economic crisis, new banking regulations that could protect us from such future occurrences continue to be prevented by the financial industry, with tactics such as packing important advisory groups (pdf) with industry-friendly lobbyists.

And if further proof was needed of how European institutions in Brussels are putting corporate interests before those of its citizens, look no further than the ongoing trade negotiations between the EU and the US (called ‘TTIP’, the Transatlantic Trade and Investment Partnership). Negotiated in secret between governments and business, they intend to weaken social, environmental and economic standards on both sides of the Atlantic (to create an ‘enabling environment’ conducive to business); give corporations the right to sue governments who try and legislate in the public interest, e.g. by banning GMOs, fracking or other socially and environmentally harmful practices; and give business a huge say in all future regulations. In short, TTIP will undermine democracy and the role of elected governments while further empowering the rights and role of corporations.

As well as being the lobby capital of Europe, Brussels is also a key place to tackle the the excessive lobbying influence of banks and big business, which is why we are asking MEPs who sign the pledge to take concrete actions. Steps such as demanding a mandatory lobbying transparency register, so we can see who our policy-makers are meeting; or tackling the corporate domination of the Commission’s advisory groups by freezing their budgets until they reform; or demanding full transparency in the trade negotiations; or championing strong rules to ensure the ethical behaviour of MEPs and Commission staff.

More than 40 MEPs from across the political spectrum have already signed up, including Ska Keller, joint European Commission President candidate for the Greens; Gabi Zimmer, leader of the GUE-NGL bloc; Evelyn Regner from the Socialists Group; Monica Macovei from the European People’s Party; and Corinne Le Page from ALDE.

Come the end of May we want to see as many MEPs fighting to make sure politics is about people not profit, as well as strong voices coming from citizens at national level to to ensure this an issue not just in Brussels but across Europe. There is no quick fix for the problem of corporate capture in EU policy-making, but this can at least start us on the long journey towards dismantling corporate Europe and creating a genuine people’s Europe. Because democracy is nobody’s business.

To ask your MEP candidate to stand-up for citizens and democracy against the excessive lobbying influence of banks and big business, go to www.politicsforpeople.eu