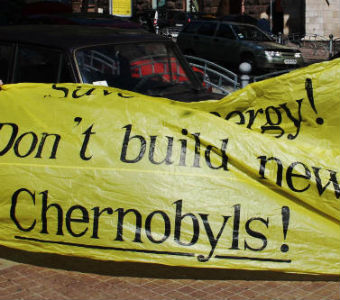 A little background first. Ukraine joined the European Energy Community in 2010 with the purpose of integrating into the common European electricity and gas market. Some preparations for this began six years ago with the construction of high voltage transmission lines and support of one billion euros from the European Bank for Reconstruction and Development (EBRD) and the EIB.

Right now Ukraine’s state energy company is beginning work on a series of ultra high voltage transmission lines, dubbed the Second Backbone Corridor. As with the earlier transmission line projects, the company plans to raise funds for this project from international financial institutions like the EIB.

The fundamental problem with the project is that it’s designed to ensure the connection of nuclear power plants in Ukraine to the European electricity network. In other words, the planned transmission lines are a part of a strategy to turn Ukraine into a cheap nuclear energy source for the European Union. Not to mention the concerns of environmentalists and the Ukrainian public that this project will not promote sustainable development but instead have negative environmental impacts, like routing through protected areas.

NECU believes that the EIB cannot support a nuclear future in Ukraine while pursuing EU objectives to diversify the energy supply of Member States. The EIB needs to understand that the price of nuclear electricity is attractive only because the cost of output reactor decommissioning and disposal of radioactive waste are not covered by the nuclear industry but by taxpayers in this case the Ukrainian people.

NECU also urges the EIB to concentrate its investments in Ukraine on renewable energy and energy efficiency as one transition country with the highest energy intensity (pdf), Ukraine has enormous potential for both.