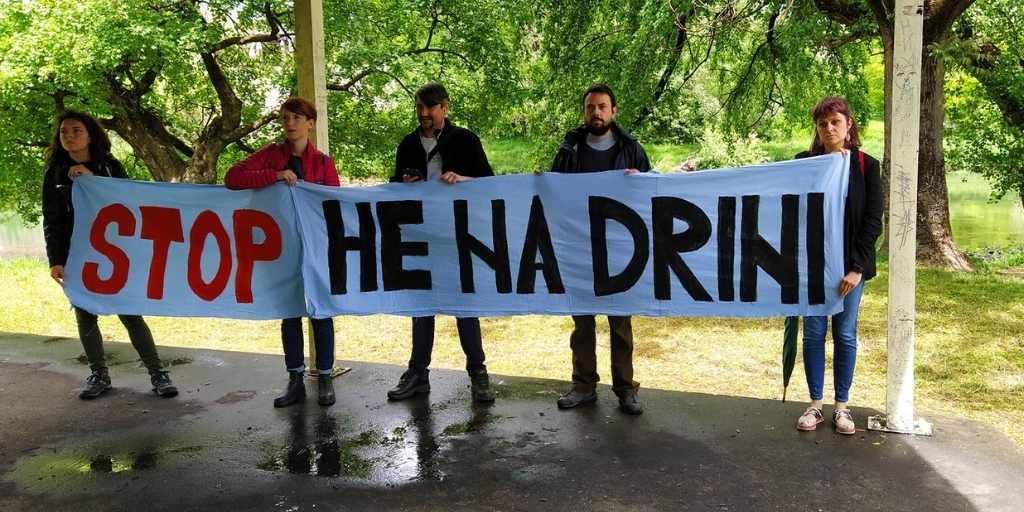 Center for Environment from Banja Luka held a protest today against the Drina dam plans.

Plans to build the Buk Bijela dam on the river Drina have been around since the 1970s, when a larger version of today’s project threatened to flood Montenegro’s legendary Tara canyon. The project was stopped then but revived in the early 2000s. After strong opposition and a highly critical report by a UNESCO delegation, the project was again shelved, but Republika Srpska began work on planning a smaller version of 93 MW, whose reservoir would supposedly not encroach on Montenegrin territory.

The project is planned in BiH’s Republika Srpska entity a few kilometres upstream from the town of Foča. Its reservoir would stretch right up to the Montenegrin border, where the river Tara and river Piva join to form the Drina.

An environmental impact assessment process was carried out between 2011-2013 but after the then investor pulled out, the project again lapsed until 2018, when Elektroprivreda Republike Srpske tried to renew its environmental permit.

Despite the fact that the three dams would turn the crystal-clear Drina into a series of stagnant reservoirs with a total length of around 30 kilometres, each of these projects is being treated as separate, with individual permitting procedures, presumably to play down their environmental impacts.

But what they all have in common is that they would destroy the most important remaining habitat for the globally endangered Danube Salmon (Hucho hucho) and wipe out the area’s burgeoning outdoor sports tourism.

The latest in a long line of premature groundbreaking ceremonies

Another thing the dams have in common is that they are nowhere near ready to be built, so today’s groundbreaking ceremony is premature, to say the least. This is not the first time that such ceremonies have been organised for energy projects that are nowhere near ready in Republika Srpska – a foundation stone was laid for the Gacko II coal plant in 2007 and Mrsovo hydropower plant in 2014, but to this day neither of the plants have been built.

In July 2017, a memorandum on construction of Buk Bijela was signed with the China National Aero-Technology International Engineering Corporation (AVIC-ENG), but no final construction contract appears to have been signed. The only building permit issued for the project so far is for preparatory works.

Neither has any loan contract been signed, so the source of financing remains unclear. And no feasibility study has ever been published. In 2018 it was revealed that none existed at the time, but if any has been carried out in the meantime, the results are unknown to the public. Dams are particularly vulnerable to the Balkans’ increasingly erratic rainfall patterns, so updated hydrological studies and feasibility studies are crucial.

Despite the fact that the Drina forms part of BiH’s border with Montenegro and Serbia, no consent has been sought from the BIH state institutions to build the plants, a fact that was today reiterated by BiH’s Minister for Foreign Affairs, Bisera Turković.

In December 2020, 24 members of the House of Representatives launched a constitutional court case against Republika Srpska’s decision to issue a concession for the construction of the upper Drina hydropower plants, as they state that decisions regarding state property such as rivers on international borders can only be taken at the state level.

The Aarhus Center in Sarajevo has also submitted two cases to the Republika Srpska high court on the Buk Bijela and Foča plants. The first is challenging the Ministry for Spatial Planning, Construction and Ecology’s 2019 decision to allow ERS to rely on a poor quality environmental impact assessment of Buk Bijela written a decade ago, instead of requiring a new study when it applied for a new environmental permit. The second challenges the Banja Luka District Court’s failure to quash the environmental permit for Foča even though ERS breached the legal deadline for requesting its renewal.

A case is also pending at the Espoo Convention Implementation Committee due to Bosnia and Herzegovina’s failure to consult Montenegro about the transboundary environmental impacts of the upper Drina hydropower plants. A group of NGOs submitted a complaint to the Committee in May 2020, as did the Montenegrin government in December 2020.

Buk Bijela’s outdated environmental assessment claims that there would be no transboundary impact from the plant, but it provides no evidence. In fact, according to scientists, damming this section of the Drina would disrupt the migration of the endangered Danube Salmon from the Tara upstream, where steep cliffs protect the river from human influences but do not offer many suitable spawning grounds.

In addition, there is a dispute about whether the reservoir would enter Montenegrin territory. If the reservoir reaches up to 434 metres above sea level, as claimed in the environmental assessment, then it would encroach on Montenegro’s territory, as the border is at 432.37 metres.

Rafting regata participants from Serbia and BIH showed their opposition to the Drina dam plans this weekend.

Local people have been told for more than four decades that Buk Bijela will be built, and during this time they have not been able to properly invest in their land or businesses. The road from Foča to the Montenegrin border has been woefully neglected, waiting to be fixed as part of the dam project that never arrives.

Yet the Drina’s natural beauty has increasingly been recognised by tourists visiting for rafting, kayaking or angling trips and facilities to accommodate them have been built above the river. These have not been taken into account at all during the project development process, being seen as a temporary phenomenon that will simply be erased when the dam is built, rather than a source of income-generating local development.

Within Montenegro, the Tara is part of the Durmitor National Park and UNESCO World Heritage Site. But when it reaches the BiH border and becomes the Drina, it is at the mercy of those who see rivers only as sources of electricity, ignoring their myriad of other crucial roles for the survival of various species.

In fact, the environmental impact assessments for the three dams are of such poor quality that we do not even know which species live in and around the upper Drina, but the presence of the Danube Salmon alone is enough to warrant legal protection for the whole remaining stretch of the Drina and its tributaries. Together, these make up around 500 km of free-flowing rivers – a stretch longer than anywhere else in the southeast European region where this majestic fish lives.

Instead of role-playing groundbreaking ceremonies it is high time to give up on the dams and get serious about protecting the upper Drina’s natural riches. Careful development of the region needs to be enabled so that local people can finally break out of their decades-long limbo and plan their future with their river intact.