Two new reports and two videos on the impacts of mining operations in Kyrgyzstan and Mongolia unearth some of the downsides of the mining business in Central Asia. 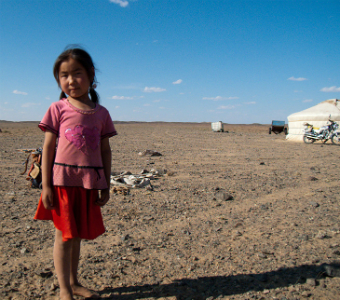 I’ve been all but dreaming of gold, copper and coal mines during the last few days when we prepared to launch the materials that my Bankwatch colleagues and others have gathered on fact-finding missions to mining operations in Kyrgyzstan and Mongolia.

The cases in question – the Oyu Tolgoi and Tavan Tolgoi mines in Mongolia and the Kumtor gold mine in Kyrgyzstan – are both important contributors to their country’s national income and both receive (or in case of Oyu Tolgoi may soon receive) support from the European Bank for Reconstruction and Development (EBRD). Both, however, pose risks to the local communities that can’t be compensated in monetary terms.

Here are some highlights from the published materials:

The report Spirited away – Mongolia’s mining boom and the people that development left behind (pdf) illustrates that the disruptions by the massive coal, gold and copper exploitations in the Gobi desert shouldn’t be expected to bring significant benefits to those who have lived there all their lives. Sukhgerel Dugersuren from Mongolian NGO OT Watch and co-author of the report puts it this way:

“Infrastructure building and pollution have put immense pressure on traditional nomadic lifestyles – already suffering from the impacts of extreme winters, with still very little in the way of jobs or social services offered in exchange to populations displaced to municipal centres. The greatest concern is the water scarcity and expected long-term shortages, yet affected people are left out of decision-making on this issue.”

This is where the bulk of the EBRD’s investments in Mongolia could be heading. The EBRD claims to add value to extractive industry projects like these by bringing higher environmental and social standards than otherwise would have been in place. But as the report shows, Mongolian authorities lack the capacity to adequately plan and control the rapid mining developments. The EBRD investments are then rather fuelling short-term commercial interests while disregarding long-term risks.

Having doubts? Then maybe listen to the displaced herders themselves:

In contrast to the Mongolian case, where negative local impacts are just beginning to take shape, the Kumtor gold mine has already generated a wealth of them – including toxic spills that have injured local people. (The mining company Centerra Gold plays it down and denies adequate compensation. Locals have gone to court.)

The report Kumtor gold facilities, Kyrgyzstan: Comments on water, environmental and related issues (pdf) by hydrogeologist and geochemist Robert Moran now adds yet another explosive layer to it. It shows that Centerra Gold has been contaminating local waters and glaciers while hiding evidence of such negative impacts from public oversight. (A shorter summary of the report’s findings can be found in our new briefing on Kumtor (pdf).)

Moran had been invited to conduct an independent technical audit of the Kumtor gold mine as part of a commission made up of Kyrgyz NGOs and state agencies’ representatives. Later however, Moran was forbidden to visit the mine, so he decided to make a field visit and take samples on his own account.

Moran was accompanied by a film team. The video is a great summary of what is happening at Kumtor and how people are struggling to have the mining company respect their rights.

(Seeing this, it gives me at least some sort of relief that my wedding ring is made of recycled gold that has been in family possession for a long time.)