Yesterday, police in Khimki arrested an activist of the Movement for the Defence of Khimki Forest. The activist Alla Chernyshova and her daughters of 3 and 6 had to spend more than five hours in custody where she was questioned as the main suspect for a false bomb threat. 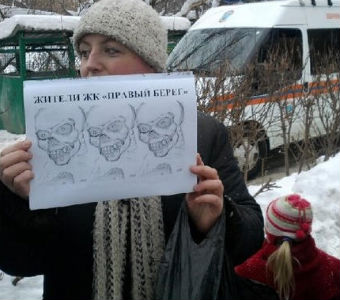 Yesterday, police in Khimki arrested an activist of the Movement for the Defence of Khimki Forest. The activist Alla Chernyshova and her daughters of 3 and 6 had to spend more than five hours in custody where she was questioned as the main suspect for a false bomb threat.

Ironically the supposed alert had been used by the police itself to prevent demonstrators and media from entering a construction site in Khimki, near Moscow on February 1.

The arrest constitutes yet another arbitrary measure by Russian authorities in carrying out construction of the Moscow – St.Petersburg motorway through the Khimki Forest. This routing has been subject to vehement opposition by local inhabitants which has led to repeated protests and detainment of activists.

A public environmental assessment, handed over to President Medvedev on February 1, concludes that widening the existing highway, outside Khimki Forest, is the best alternative (pdf). The assessment was initiated by a coalition of environmental NGOs and carried out by 18 experts in the field of environmental protection, environmental law, forestry, urban planning and transport development.

Yet public interest and environmental concerns do not seem to outweigh the prospects for profit from the commercial development of Khimki Forest – one of the few natural areas left for inhabitants of the wider Moscow area.

While the motorway section through Khimki Forest is likely to receive no funding from European public banks, the European Bank for Reconstruction and Development (EBRD) has apparently confirmed its readiness to get involved in later motorway sections, according to Sergey Kostin, head of Russia’s state road-building company Avtodor [rus].

Alla Chernyshova’s and many similar cases continue to cast a damning light on the Moscow St.Petersburg motorway project and its promoters. The EBRD and other European public banks may not have financed the Khimki section but it would be nave in the extreme to imagine that other sections of the motorway will not involve similarly underhand dealings. It would be madness for any European public investor to get involved after the Khimki Forest fiasco.

Although Alla was allowed to go home and is now formally a witness in the case, the investigator informed her she remained the main suspect. She has been summoned to appear at the police station again today.