Before making any decisions on the planned EUR 80 million loan for the Kolubara lignite mine project in Serbia, the European Bank for Reconstruction and Development’s Board of Directors should take note of the controversy the bank will get involved in. Not only are the climate impacts of lignite well known, but the project is also indirectly connected to the resettlement of nearby residents. 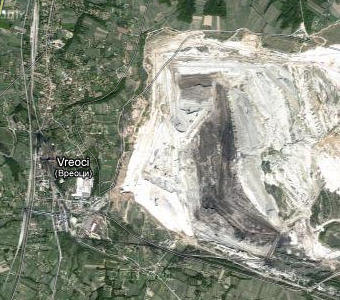 It’s a busy time here in Serbia: after visiting Roma families to be resettled for road constructions two weeks ago, I’m now in the village of Vreoci, where the planned resettlement of 1180 families has caused some controversy and authorities have now started the excavation of bodies from the village’s cemetery. The reason for which people and their history are supposed to leave is the development of a new field in the lignite open cast mine in the Kolubara mining complex, Serbia.

The European Bank for Reconstruction and Development (EBRD) and the German development Bank KfW (Kreditanstalt fuer Wiederaufbau) are considering providing loans worth EUR 140 million (80 and 60 million respectively) for the project.

Resettlement without any plan or consent

The resettlement of the Vreoci village, about 60 km south of Belgrade is a precondition for the implementation of another project (without EBRD financing) at the Kolubara mining complex. During a meeting with a representative of the Vreoci population, I have been told that 1180 families should be evicted in the framework of this project.

But so far only 170 families have accepted financial compensation. Others are requesting to be resettled together and with all their belongings, to a location similar to the current one. The Serbian Ombudsman has criticised the fact that the opinions of the Vreoci inhabitants have not sufficiently been taken into account and that they have been stigmatised in the Serbian media for defending their rights.

Despite the unclear situation, the authorities last night began to excavate bodies from the village’s cemetery, ignoring objections by inhabitants and the fact that no agreement has yet been reached.

Although the resettlement is not part of the EBRD’s Kolubara project, it is nevertheless closely connected – it is happening only a few kilometres away on another field in the same mining complex. The EBRD of all institutions should be very cautious when considering projects that are related to resettlement issues in Serbia. The Gazela bridge rehabilitation offers more than enough lessons that the bank should have learned by now.

But non-consensual resettlement is not the only reason to criticise Kolubara.

Update (July 6)
In view of the recent developments, the local community has now requested the EBRD to postpone its decision on the Kolubara loan (scheduled for July 12) until the relocation of the village has been implemented in agreement with the inhabitants and without further disregard of their rights. You can read their compelling letter here (pdf).

Update two (July 28)
After postponing the loan decision by two weeks, the EBRD yesterday approved the EPS Kolubara Environmental Improvement project. We are in contact with the bank to learn about their responses to the issues raised by us and the Vreoci community.

Kolubara is only one piece in the fossil fuel puzzle

The European banks’ investment would in effect support the construction of lignite power generation to the tune of 700MW at Kolubara – part of the solution for Serbia’s energy needs according to the country’s national energy strategy.

Anyone taking the danger of climate change seriously must agree that there’s something deeply flawed with Serbia’s priorities. Kolubara will deepen the country’s dependency on lignite – the dirtiest of all fossil fuels. At the same time, the Serbian authorities have not yet seriously considered the potential for energy savings (except for a few selected industry sectors) and renewables are still sidelined in our country.

The EBRD apparently doesn’t see it as I do. During a recent meeting, EBRD staff made clear that the bank is indeed worried about hidden state subsidies for the coal sector in Serbia. But while recognising the large amount of investments needed for the development of renewable energy sources in Serbia, the EBRD’s answer was not that it should focus its investments on this sector. No – the EBRD claims that its involvement in Kolubara is necessary to improve the present structure of coal-for-electricity production.

Consequently, the Kolubara project is tagged as ‘environmental improvement’ on the EBRD’s website. But no matter how efficient future lignite processing is, making investments into perpetuating lignite production instead of clean electricity generation resembles re-arranging the deck-chairs on the Titanic rather than serious ‘environmental improvement’.

This becomes all the more relevant when considering the wider implication of this type of lending by the EBRD and other public financial institutions. Because Kolubara is only one piece of a much bigger fossil fuel puzzle being pieced together under the nose of the European Union’s climate targets: While governments in central and eastern Europe plan to continue their reliance on fossil fuels (coal in particular), international financial institutions like the EBRD and the European Investment Bank (EIB) are helping them on their way, instead of sending a strong message that this isn’t the way forward.

There are not only individual cases, like Kolubara in Serbia, the Sostanj lignite power plant in Slovenia or potentially a number of coal power plants in Poland. The EBRD is also investing in oil and gas – more sectors that hardly count as building new markets. The EBRD refuses to phase out its fossil fuel investments and actually increased them dramatically (pdf) between 2006-2009.

National governments, as sad as it is, might be tempted to choose the easy option and opt for coal – which appears cheap when not paying its external costs – rather than building up a renewable energy sector. International financial institutions on the other hand have no such “excuse” for not using the financial resources at their disposal in innovative, climate-friendly and truly sustainable ways.

Find more details on the Kolubara project in our briefing paper (pdf).