During the annual meeting between civil society and the EIB’s Board of Directors, the European Investment Bank committed to review its outdated tax haven policy this year. The commitment which followed a letter from several NGOs expressing such demand, is the most concrete outcome of the meeting which took place on 3rd February in the bank’s headquarters in Luxemburg. 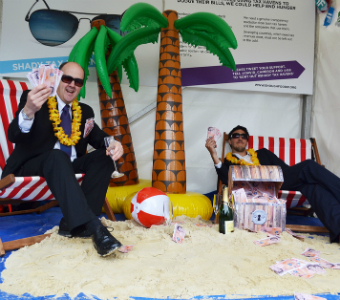 Compared to 2013, when the EIB’s energy policy dominated the meeting, a wider number of cross-cutting issues were raised by civil society organisations during this year’s discussions. The bank’s accountability and transparency, however, quickly emerged as central themes – topics on which the EIB showed only limited progress in the recent years.

The EIB repeated its commitment to a high level of transparency in its operations, including via the announcement of the revision of its transparency policy in 2014. However, the civil society organisations were adamant that the EIB needs to more seriously tackle the issue of its lending though financial intermediaries. The different sessions especially saw Dotun Oloko – whistleblower in the Ibori case – highlighting the poor due diligence of the EIB when operating through private equity funds and its lack of seriousness in dealing with fraud and corruption allegations.

Faced with calls for more accountability and taking into account the recommendations from its own Complaints Mechanism, the bank remained elusive. The vice-president Pim van Ballekom noted that the EIB is asked by EU institutions for more transparency, monitoring, evaluation, democratic scrutiny and a zero tolerance on tax and fraud issues, but that ultimately it is up to the bank to strike a balance. Indeed, testimonies from local activists – such as those fighting the Castor Project in Spain – demonstrate that the way the EIB strikes this balance does not testify for a genuine consideration of public participation and greater inclusion of affected communities in its activities.

Also lacking was the bank’s vision on the social impacts of its operations. At the first meeting of this kind in 2011, former president Philippe Maystadt openly put forward the willingness to place human rights consideration at the heart of the bank’s lending – without concrete results though. Three years later, the EIB did not take any commitment in this regard and avoided most critical views.

However, the EIB explicitly proved ready to pursue its way on a green path via strengthening its Emissions Performance Standards and launching a public review of the climate impact of its lending portfolio in 2014.

Finally, a disappointing note was the minimal involvement of the Directors of the EIB in the meeting which was largely monopolised by the management of the bank. Opening discussions with the governing board of the EIB – despite diverging views – is crucial if the bank wants to become a fully accountable institution.