As it seeks to morph into the EU’s climate bank, the European Investment Bank (EIB) continues to downplay the climate footprint of many of the projects it finances, including that of Europe’s largest fossil fuels project, the Southern Gas Corridor. 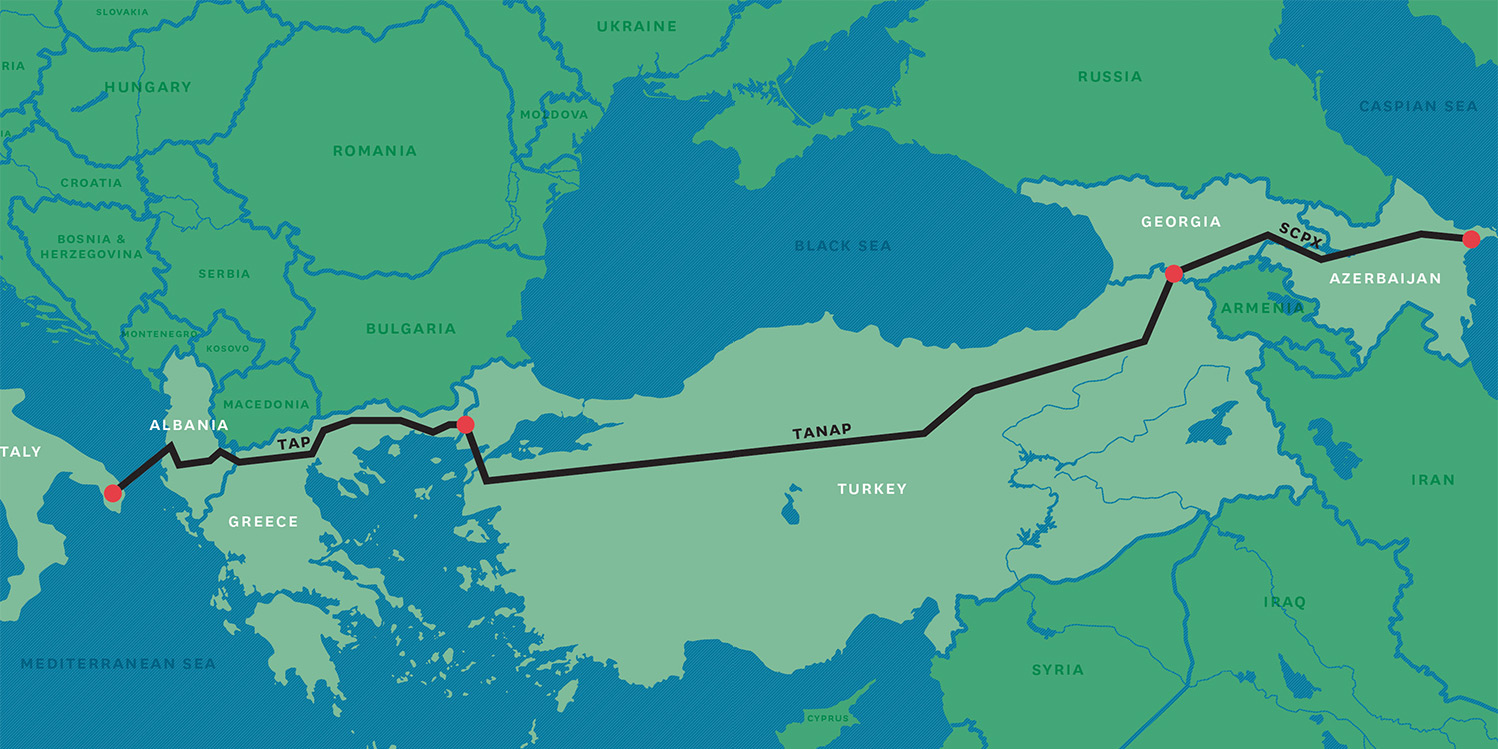 In November 2019, the EIB made important progress by deciding to phase out lending to fossil fuels projects and it is currently developing a roadmap to align its financial flows with the Paris Agreement.

However, despite this progress, the bank keeps on denying that its two massive loans, totalling EUR 2.4 billion, for the controversial Southern Gas Corridor, will only worsen the climate crisis. This therefore calls into question the bank’s ability to objectively assess the climate impacts of its future investments that will have to be Paris-aligned.

The two loans were extended for the construction of the Trans Adriatic Pipeline (TAP) and the Trans Anatolian Gas Pipeline (TANAP), which together with the extended South Caucasus Pipeline are intended to  bring Azerbaijani gas all the way to Italy.

Civil society groups have repeatedly warned the world cannot afford more public money sunk into massive fossil fuel projects such as the Southern Gas Corridor, and in February 2019,  Bankwatch, Counter Balance, Friends of the Earth Europe and Re:Common filed a complaint with the EIB’s Complaints Mechanism.

The complaint argued that the EIB substantially underestimated the greenhouse gas emissions associated with the project.

It exposed the incomplete and incoherent nature of the bank’s assessment, including the use of outdated science and a failure to address significant greenhouse gas emissions. In particular, the EIB underestimated the global warming effect of methane, a greenhouse gas up to 86 times more powerful than carbon dioxide (CO2).

Environmental and social impact assessments (ESIA) for both pipeline projects also systematically underestimated inevitable releases of this extremely potent greenhouse gas and excluded key parts of the project, such as the gas extraction and the pipelines carrying it through Azerbaijan and Georgia.

In a report issued several days ago in response, the Complaints Mechanism simply dismissed these concerns, saying it did not find anything wrong in the EIB’s carbon footprint assessment. In fact, instead of addressing the arguments in the complaint, the report provided no additional justifications beyond what the EIB had contended earlier.

For one, the bank’s own carbon footprint assessment hadn’t considered the project over its full lifetime, but instead based its analysis only on the first stage of the project, in which it will transport 10 billion cubic meters of gas annually. However, it is clear that the pipelines are ready to transport at least twice as much gas, in line with the political objective stated by the EU for the Southern Gas Corridor to transport more and more gas from Azerbaijan and other countries in the Caspian region in the future. The EU list of projects of common interest (the so-called 1st PCI List) has also expressed clearly that 10 billion cubic meters annually is a minimum amount of gas that will be imported to the EU thanks to this project. Even the EIB itself doesn’t seem to have any doubts about the project’s capacity: “the infrastructure created could transport larger volumes of gas in the future – at a lower cost than during the initial phase – which would increase the economic benefits of the projects.”

Then, the EIB argued that the project will be entirely climate neutral by making the highly questionable assumption that all the imported gas will be used to replace more polluting sources of energy. In Turkey, gas from TANAP is expected to replace coal for power generation but no evidence was provided to substantiate this claim, such as coal-based power plants closure plans. In fact, this assumption has little to do with reality. The 2019 OECD report noted that Turkey’s stated objective was to reduce its reliance on energy imports by exploiting its domestic coal resources. According to this report, Turkey is the country with the largest coal power plant development programme in the OECD and new plants are being constructed in line with the national target to increase  electricity generation from domestic coal.

Similar ungrounded assumptions have been made for the gas to be imported to the EU. According to the EIB, it is supposed to replace Russian gas from the Nord Stream 2 (NS2) pipeline or from Ukraine. In reality, NS2 is well under construction and the Ukrainian gas system remains entirely dependent on Russian counterparts’ decisions whether to use it or not.

The EIB’s assumptions that the gas from the Southern Gas Corridor will entirely replace other sources of gas are highly hypothetical. In reality, this gas could also procrastinate energy efficiency measures or the expansion of renewable energy sources which will have to compete with this subsidised gas. In the end, the bank was unable to provide any indication which EU gas imports will be replaced by the Southern Gas Corridor.

Although the EIB internal standards require that all operations comply with the United Nations Framework Convention on Climate Change, in reality the bank did not conduct any due-diligence regarding the impact of this gas project on the obligations of transit countries under the Convention.

The majority of direct emissions taking place along the pipeline route will take place outside the EU, namely in Azerbaijan, Georgia, Turkey and Albania and will feature on the emissions balance sheet of these countries. Emissions from TAP and TANAP in Greece and Turkey, for example, will be reported in their National Inventory Submissions and will be subject to emission cuts as committed by those states. These countries will however not be able to claim that TAP or TANAP related emissions were compensated by emissions reductions taking place somewhere else, as the EIB had suggested, either in Ukraine or Russia.

In the case of Albania, the impacts of TAP will be particularly significant. When TAP will reach its designed capacity of 20 bcm in 2023, its emissions are expected to account for 7% of the annual total emissions of the country and will even double the emissions of the Albanian energy sector. Again, our concerns regarding the EIB’s dismissal of potential mitigation and compensation measures or offsets for Albania have effectively been brushed-off by the EIB-CM.

The Complaint Mechanism’s disappointing report suggests that the EIB has not learned from its mistakes. Despite the clearly harmful consequences of the Southern Gas Corridor, the EIB keeps on disowning the project’s contribution to the climate crisis.

Not least, the Complaints Mechanism’s response to the civil society complaint comes around the same time as the bank has reportedly approved another tranche, worth USD 270 million, of its loan to the TANAP project.

The EIB’s approach is particularly worrying as it shows that the bank’s recent climate commitments risk being watered down by the continuous underestimation of the climate impact of the projects that it supports. It raises serious questions regarding the bank’s ability to assess the full extent of emissions of its projects, including its new energy projects such as hydrogen, and their compliance with the Paris Agreement. As this emblematic case demonstrates, the EIB’s commitment to the United Nations Framework Convention on Climate Change remains a mere declaration.