The Plomin “C” coal power plant in Croatia is illegal – so why has its environmental impact assessment been given the thumbs up? 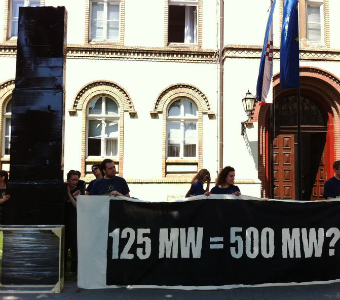 Despite the controversies around coal power plants in Slovenia, Serbia, Romania, Croatia is on its way to adding one more to the list – if we don’t stop it:

The Croatian electricity company HEP – along with as yet undefined private investors – is planning to construct a new 500 MW unit at the Plomin power plant on the Istrian coast. The project, entitled “Plomin C” is being presented as a reconstruction of Plomin 1, even though it is nothing of the kind, being of more than four times greater capacity than Plomin 1’s 120 MW.

Today the majority of members of the commission responsible for assessing the environmental acceptability of the Plomin “C” coal power unit gave a green light on the Environmental Impact Assessment (EIA) for the project in spite of the study author Ekonerg’s failure to adequately address several serious problems. These include seawater warming and a lack of inclusion of certain transmission lines – problems which had previously caused the commission to send the study back for revision.

Doubts about the commission’s commitments to thoroughly resolve these problems have been increased by the three large elephants which have stood in the corner of the room almost unnoticed throughout their meetings:

While the first two points are left aside due to lack of binding legal obligations and a clear sustainable long-term vision for Croatia’s energy system, the Ministry of Spatial Planning and Construction has a clear duty to point out the last issue through its representative on the EIA commission, but it has not.

Asked by Bankwatch member group Zelena akcija/Friends of the Earth Croatia for an explanation, the Ministry repeated the same incongruous argument that HEP usually comes up with: that the spatial plan is talking about Plomin 3, a new third unit, while this project is merely a replacement for Plomin I, hence the name ‘C’ instead of ‘3’.

This does not at all address the point about the total capacity of the Plomin units not exceeding 335 MW, which was illustrated on Tuesday by Zelena akcija in a symbolic protest action outside of the Ministry of Spatial Planning and Construction. With a large black column of approximately four metres height representing the new coal unit and a one metre high transparent box representing the spatial plan’s gas plant, the group drew attention to the absurdity of trying to pretend that the new unit is in line with the spatial plan.

Giving this study a green light sets a dangerous precedent in the worthlessness of spatial plans and absence of sound judgement – not a good sign for a country whose government thinks it is well on the way to becoming a modern and advanced democracy.

Now it is up to the Ministry for the Protection of the Environment and Nature to bring some common sense into the proceedings and to issue a negative decision on the Environmental Impact Assessment.