The European Commission walks a tightrope with the EU Green Deal. Despite the long-term objectives of achieving a circular economy and reducing resource use, it plans to increase raw materials mining to meet the demand for the clean energy, renewables, and other high-tech solutions that are at the forefront of the EU’s green development plans. A planned lithium mine in Serbia, vehemently opposed by local communities, is a poignant example of this tension. 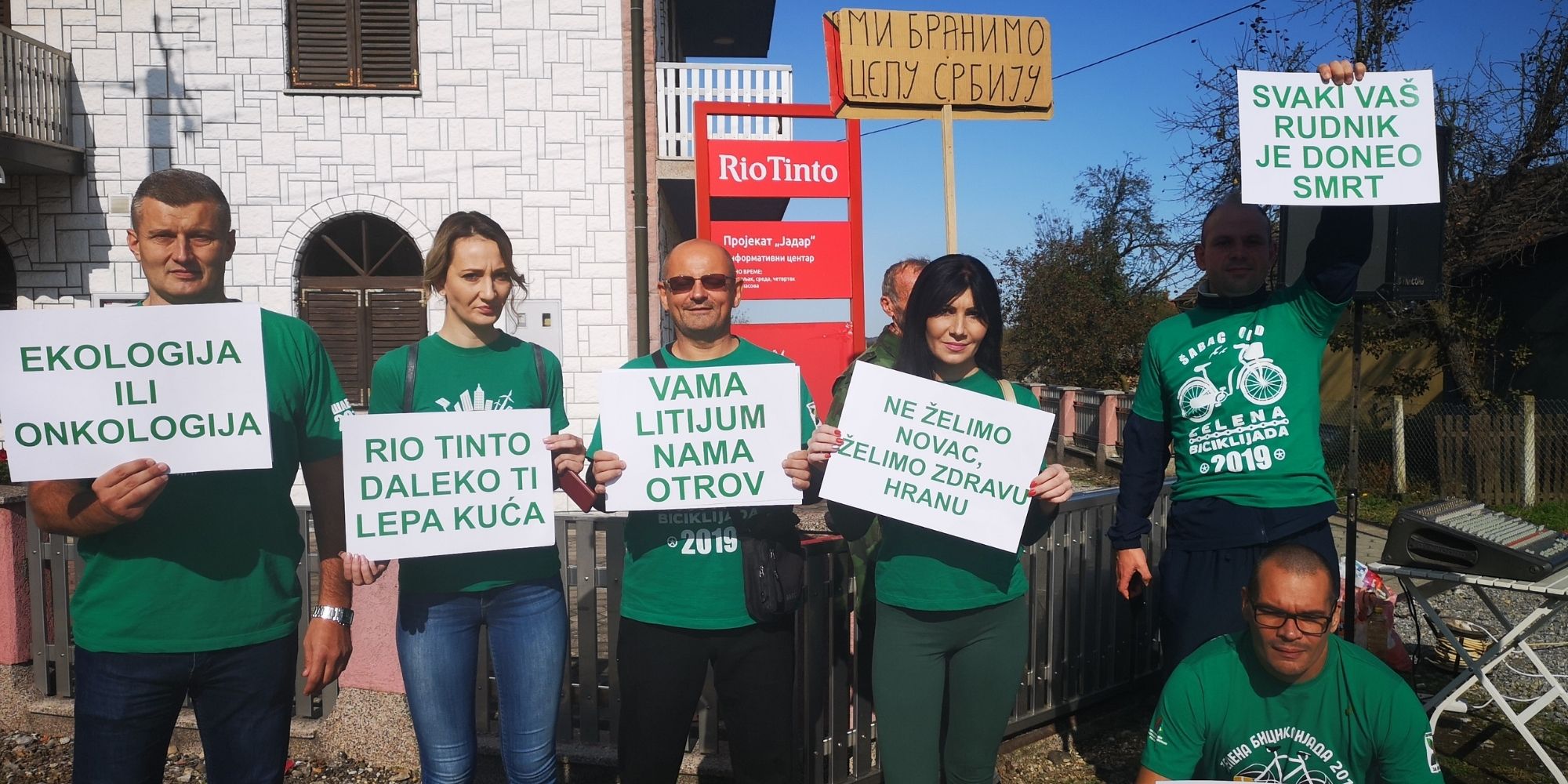 As Bankwatch’s recent Raw Deal report exposes, meeting industry and consumer demands cannot come at the expense of the people and nature at the other end of the supply chain, where the raw materials – indispensable for a green and digital Europe – are extracted.

A new case study on a planned lithium mine in Serbia offers an example of the possible hidden costs of Europe’s Green and Digital Decade. The mine, promoted by corporate giant Rio Tinto, is connected to illegal government support, lack of public participation and secrecy.

The sourcing and production of raw materials were included as a priority in the European Green Deal:

‘Access to resources is also a strategic security question for Europe’s ambition to deliver the Green Deal. Ensuring the supply of sustainable raw materials, in particular of critical raw materials necessary for clean technologies, digital, space and defence applications, by diversifying supply from both primary and secondary sources, is therefore one of the pre-requisites to make this transition happen.’

In the Raw Materials Initiative, the Commission has also proposed to ‘accelerate and facilitate procedures’ for the approval of mining projects in the EU and its neighbours, such as Norway, Ukraine and the Western Balkans, as well as in its partnerships with countries in Africa and Latin America. In November 2020, Commissioner Šefčovič mentioned that Serbia is a country with solid reserves of most critical raw materials, and a promising source for ensuring the EU’s ‘strategic autonomy’ for key raw materials. What did he have in mind?

The story goes back to 2007, when news broke about the discovery of a mineral called jadarite, whose composition is described as identical to the formula invented for the fictitious kryptonite from the film Superman Returns. The mineral is composed of lithium and boron. Exploratory works on the jadarite deposits, located in the Jadar River Valley in western Serbia, have been developed by the international mining corporation Rio Tinto.

If the estimates stating that there are approximately 200 million tons of lithium borate ore in the Jadar Valley are correct, Jadar’s future mines will be one of the world’s largest lithium deposits, supplying 10% of the world’s demand for lithium. Lithium is considered one of the key raw materials for the green and digital transition agenda of the EU.

The Serbian government promotes this investment as the ‘project of the century’, a ‘project that will put Serbia on the map of high technologies’, and one that should serve as a flagship success of both Rio Tinto and the Serbian government. However, there are numerous problems with the project. Rio Tinto has not disclosed crucial information about how lithium will be extracted and what the impacts will be on the population. The Serbian government has offered illegal support to facilitate the mining company’s initial work.

Most importantly, the project will drastically and irreparably alter the environment and way of life of the residents living there. Residents have not been captivated by the glamour of the mineral and the vision for the mine’s construction. They argue that, if developed and deployed, these facilities will threaten more than 15,000 agricultural households in the town of Loznica and the Krupanj municipality and the health and well-being of citizens of the communities of Loznica, Šabac and Valjevo.

‘Now that digitalisation has become the driving force of the modern economy and even a critical factor in today’s geopolitics, there is an urgent need for more democratic governance over technology.’

Indeed, for this EU agenda to be effective, it has to counterbalance the procurement of the raw materials indispensable for the green and digital revolution with safeguards for the people affected by raw materials mining and for the nature destroyed by the overwhelming pressure for cheap and fast exploitation. Therefore, the Commission must be even more ambitious and incorporate policies that ensure the use of less exploitative and toxic-safe technologies; the restoration of the old mining sites; strict environmental, social and human rights due diligence for mining projects; and finally, the right for the communities affected by the mines and surrounding facilities to have a say.

The EU cannot attempt to overcome the climate crisis at the expense of local communities, workers’ rights and biodiversity, especially in the face of the COVID-19-induced economic and social crisis. It would be a raw deal, one experienced too often in the past, which should finally be left far behind.