Bankwatch and Greenpeace won a court case* in Romania this week, which will effectively prevent 59 hectares (the equivalent of 118 football pitches) of forest from being destroyed by the expansion of one of the open-pit coal mines that supplies Rovinari, one of the largest coal plants in Romania. 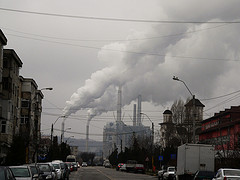 Agreeing to the arguments of the two NGOs, the Romanian court in Gorj County (where Rovinari is located) cancelled an environmental permit which had been granted to the owner of the Rovinari mines, state company Complexul Energetic Oltenia, to cut the forests in order to expand one of its mines.

Complexul Energetic Oltenia plans to expand a number of its open-pit operations in the Gorj County, which means hills will have to disappear together with forests, agricultural land, and parts of villages. The number of mining expansion operations is staggering while the economics of coal mining in the region are unpersuasive and social problems have been intensifying as well.

The lignite mining expansion takes place in a context where the company has difficulties in selling its output because of a decrease in electricity consumption since the start of the economic crisis coupled with a large increase in renewable energy capacities (mainly wind and solar) in Romania over the past years. Under these circumstances, the company requires ever more inventive forms of state support, sometimes in defiance of pro-competition legislation in place. These forms of state support include special treatment on the market (priority and guaranteed access to the grid) and even expropriations to be paid by the state, instead of the beneficiary.

This conflict over lignite mining is happening in a beautiful area where however people are trapped in a mono-industrial county because politics are strictly lignite-oriented and no ideas of alternative development are being pursued by regional authorities.

Even though the court case was won, there’s plenty of work ahead. Ten other court cases opened by Bankwatch and Greenpeace concerning expansion of mining in Romania still have to be ruled on, and additionally much work needs to be done to get Romanian authorities to seriously support alternatives to coal. Still, it is a good sign that court litigations on environmental matters can constitute one of the instruments for Romanian civil society to use in their campaigns.

*The court case was filed in October 2013, to annul an environmental permit for the expansion of the mine, based on the following arguments, among others:
– the environmental permitting procedure was conducted for deforestation alone, ignoring the lignite mining expansion and its other impacts
– this case of deforestation is not singular and the environmental impact should have been assessed in a cumulative manner for the entire mining operation
– there were no assessments of impacts on climate, human health, neighbouring protected areas (four Natura 2000 areas)