European public banks who have repeatedly voiced their commitment to tackling the climate crisis and ‘greening’ their investment portfolios continue to dole out cash for fossil fuels extraction, distribution and consumption. 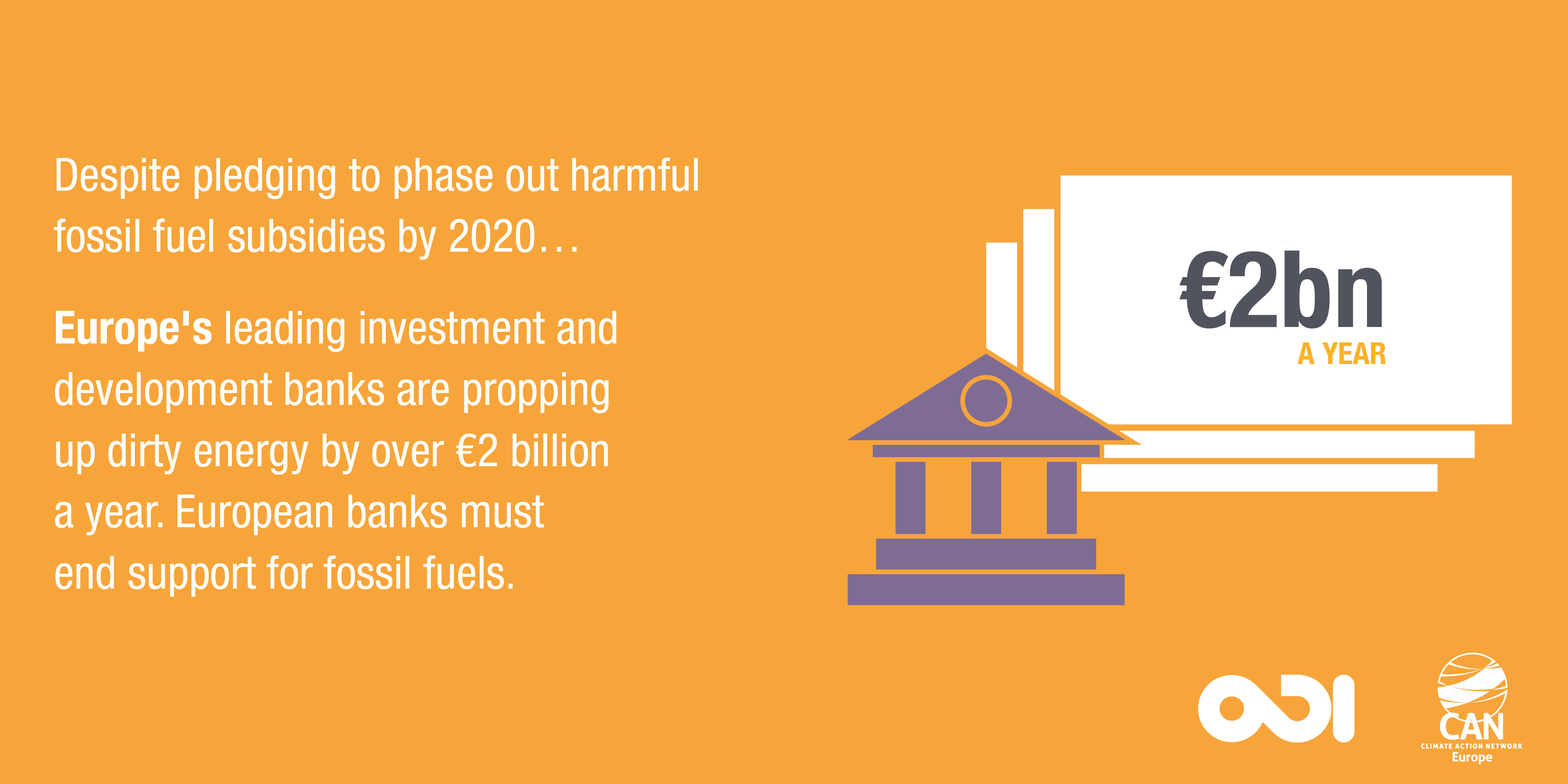 The United States and Syria stand alone. With the recent adoption by Nicaragua of the Paris climate agreement, only those two countries appear to ignore the global imperative of phasing out fossil fuels if the world is to avoid the worst impacts of the climate crisis.

Within the EU, the acknowledgment of the need to phase out fossil fuel subsidies as a key part of the global effort to stem climate change has materialised in multiple policy decisions including the Europe 2020 Strategy and the recent EU 2030 Energy and Climate governance framework.

Yet, in spite of these policy pledges, a report released today shows that fossil fuels projects, in Europe and around the world, are still being enabled by billions in European public money.

In particular, the public banks – namely, the European Bank for Reconstruction and Development (EBRD) and the European Investment Bank (EIB) – which have repeatedly voiced their commitment to tackling the climate crisis and ‘greening’ their investment portfolios continue to dole out cash for fossil fuels extraction, distribution and consumption.

The report, co-ordinated by the Overseas Development Institute and Climate Action Network (CAN) Europe with input from Bankwatch, shows that between 2014 and 2016 fossil projects across the EU and beyond received EUR 2.3 billion from EBRD and more than EUR 6 billion from the EIB.

In the span of these three years, the report finds, EU public banks and financial instruments have spent an average of EUR 3.2 billion every year on gas and oil production, mostly within the EU.

The Paris Agreement requires signatories to make “finance flows consistent with a pathway towards low greenhouse gas emissions and climate-resilient development.” Over the year following the signing of this landmark accord in December 2015, the contribution of European public banks and financial instruments to fossil fuels projects has slightly dropped but at over EUR 2.4 billion in total it remained far too generous to facilitate the urgent energy transition required.

In particular, during 2014-2016, the EIB, the world’s largest public lender, provided a total of EUR 5.3 billion to one coal project, two oil projects and 27 gas projects in 12 EU countries.

At the same time, the bank invested almost a billion euros in fossil fuels projects outside the EU. One coal and five gas projects in five countries (Mongolia, Ukraine, Tunisia, Egypt and Moldova) were awarded a total of EUR 976 million in European public money.

Over the same period, 2014-2016, the EBRD channelled no less than EUR 2.3 billion to 31 coal, oil and gas projects in the Caucasus, Central Asia and the Middle East. In addition, six fossil fuels within the EU – in Estonia, Romania, Greece and Bulgaria – enjoyed a total of EUR 209 million in EBRD financing.

But there’s more to it. The European Fund for Strategic Investment (EFSI), which is managed by the EIB, was originally intended as a financial instrument to stimulate investment in sustainable infrastructure across the EU. Yet, already in its first two years of operation, 2015-2016, the Fund spent EUR 1.2 billion on eight gas distribution projects. Evidently, investment is desperately needed for defining ‘sustainable infrastructure.’

Released just days after the European Commission’s conference on the Future of EU Finances, the new report also underscores the urgency of reforms to the EU Budget.

As the Commission moves to prepare the proposal for the next seven year EU budget cycle, the report’s findings expose the extent to which some of the very same programmes lauded as driving climate action, are at the same time bankrolling fossil fuels with billions of euros of EU Funds. These include the Connecting Europe Facility, which in 2014-2016 directed EUR 1.1 billion to gas projects, and EUR 930 million in the current programming period of the European Regional Redevelopment Fund.

These figures therefore provide strong evidence that specific reforms will be needed to bring the EU Budget in line with the UN Sustainable Development Goals and the Paris Agreement.

Next: the mother of all fossil fuels subsidies

The next UN climate summit is less than two months away, and European public banks appear as eager as ever to enable even more fossil fuels infrastructure. The Southern Gas Corridor, the largest energy project the EU is currently pursuing, could soon receive unprecedented volumes of public finance.

The EBRD has already awarded more than half a billion euros in three loans to the Shah Deniz II gas drilling project in Azerbaijan which is intended to feed the massive pipeline project.

On October 18 both the EIB and the EBRD are expected to decide on new loans to the two main legs of the Southern Gas Corridor project. The EBRD is now preparing a USD 500 million investment in the Trans Anatolian Pipeline, while the EIB is considering a EUR 2 billion loan – in fact, the EU’s largest ever single investment – to the Trans Adriatic Pipeline.

Ultimately, by continuing to provide hefty support for fossil fuels projects the EIB, the EBRD and the EU’s other financial instruments are effectively fuelling the climate crisis whose fingerprints are all over disasters such as the latest string of monster hurricanes to hit the U.S. and the Caribbean or the recent massive floods across Bangladesh, India and Nepal that killed over a thousand people and affected tens of millions.