Last weekend, the Georgian Ministry of Energy and Natural Resources again left no doubt about where its main interests lie: enforcing the massive exploitation of Georgia’s hydropower potential despite and against people’s concerns and if necessary by use of force. 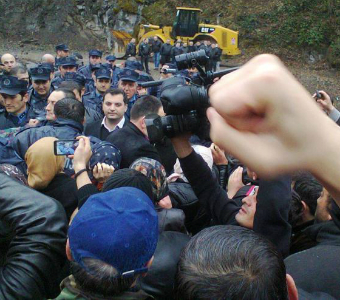 On Saturday, March 8, about 500 villagers staging a road block in the Adjara region were violently dispersed by an equal number of policemen and special forces. Deputy Minister of Energy, Ilia Eloshvili, stood by after ordering the intervention even though the reasons for his presence at the scene are unclear.

The incident has been recorded on video and reported in Georgian media. A representative from the Georgian Young Lawyers Association (GYLA), Gia Kartsivadze, said in an interview with netgazeti.ge:

“Based on what I have seen in videos filmed by the people there I can say that the police used violence against the protesters. GYLA is planning to provide legal assistance to the people.” (own translation)

The currently available video footage only depicts the scene after the police has taken control of the road.

The villagers blocked the road to prevent the construction of a tunnel for the 185 MW Shuakhevi hydropower plant (HPP) which the European Bank for Reconstruction and Development is considering to finance with a loan of up to USD 86.5 million (EUR 63.7 million). The tunnel, to be drilled under the village Ghurta, is one of three planned diversion tunnels as part of the project.

The locals say the territories of their villages are characterised by landslides and worry that the construction of a derivation tunnel and a reservoir may activate them. People still remember when in 1971 the worst of the landslides cost 22 people’s lives. The project company, Adjaristsqali Georgia LLC [*], denies these risks yet at the same time refuses to sign warranty contracts to offer compensation should the constructions cause damages.

In order to decide between these contradicting claims a proper investigation into the landslide risks is needed, especially in the area where said tunnel will be constructed. In principle, the project’s environmental impact assessment (EIA) from September 2013 could offer this, but the study was by far not detailed enough. The Georgian version (pdf) describes this in chapter 6.9.4:

“[T]he geomorphologic and landslide hazard maps have been prepared from aerial photo interpretation supplemented by data from the ground and are not the result of detailed field mapping with full ground coverage. Both maps should therefore be used to indicate the general condition of the land surface over large areas.

Detailed ground investigations may be necessary for assessment of small areas and specific sites.” (emphasis added, our translation)

The ESIA report does not contain detailed geological surveys on the ground and for this reason alone cannot rule out negative impacts such as landslides. (Interestingly, this information is not to be found in the English version of the EIA report (available on the EBRD’s website (pdf)) which lacks the entire chapter 6.9.)

The report acknowledges this on page 392 (again, only in the Georgian, not the English version):

“[…] unexpected ground conditions may be encountered during the course of the construction works”.

The lack of geological survey data is especially true for the area near Ghurta, where the Skhalta Transfer Tunnel is planned to be constructed. It is covered in chapter 5.3.6.5 of the EIA report (equally only in the Georgian version):

“Skhalta Transfer Tunnel – No mapping or intrusive work has been undertaken along the Skhalta to Didachara transfer tunnel.”

The environmental impact assessment therefore clearly states that the project promoter has no knowledge whatsoever of the geological conditions around the village of Ghurta and the damage that the Shuakhevi HPP project may cause there.

Improved standards with the EBRD?

The project company Adjaristsqali Georgia LLC and the was very well aware of the EIA’s shortcomings. We had raised them in our comments to the report (pdf) [ka]. Yet, instead of taking the necessary precautions and undertaking a thorough geological assessment, the company ignored our comments but still received a construction permit.

Ironically, the EBRD’s rationale for considering a loan for the Shuakhevi project includes the following expected transition impact:

(iii) Setting standards for corporate governance and business conduct from the project’s potential for setting improved standards for HPP implementation in Georgia through the application of international best practices. (Source: EBRD)

Neither the project’s incomplete impact assessment, nor the government’s treatment of locals show the way towards “improved standards”.

The EBRD has not yet approved the loan and should not do so before at least the reasonable fear of landslides in Ghurta has been dispelled with geological data or locals will be resettled with prior and informed consent.