Colleagues from the Egyptian Centre of Economic and Social Rights criticise the European Bank for Reconstruction and Development’s too lax approach when examining its activities in Egypt’s cement sector. 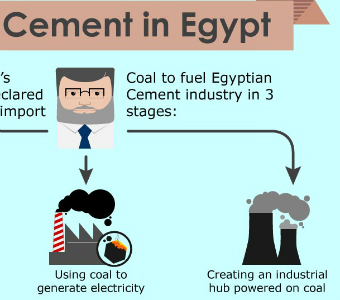 Early in 2014 those of us at the Egyptian Centre of Economic and Social Rights (ECESR) working separately on the possibility of coal being imported into Egypt realised that Egypt’s Minister for Industry had organised a meeting with EBRD officials with coal on the agenda. The level of foreign funding that seemed to be popping up from various corners made us very suspicious that the EBRD might jump on the bandwagon.

Initially the main consideration was importing coal to fuel the cement industry, with the second phase to shift electrical power stations to coal use too. As far as we could see however, the initial decision was going to focus on the cement industry. See on the right an infographic we produced on the subject.

In response to these rumours, Egyptian civil society organised the first major ‘environmental’ opposition campaign the country has seen. Egyptians Against Coal took action, with CSOs like ECESR as part of the coalition of activists, organisations, groups and individuals interested in preventing coal coming into Egypt. The campaign, since its inception in September 2013, has indeed succeeded in putting across the facts about the health, environmental and economic costs of using coal. What would have been a straightforward task for the cement industry in persuading impressionable officials of the benefits of coal has become a much more drawn-out fight, taking place prominently in the political and media spotlight. In this we have succeeded.

However despite our efforts to date, on 24 April 2014, the Cabinet of Ministers decided to allow the use of coal for the cement industry and electrical plants in one fell swoop. Since then, media and public interest has piqued, with appearances on popular television helping to push the Facebook following of the campaign to over 150,000 people and a trending, ‘no coal Egypt’ hash tag on Twitter in less than two weeks. This week we launched a petition to harness this support and send a message to the new Cabinet set to be sworn in within a couple of weeks following the Egyptian presidential elections.

Except for being the main source of facts, scientific findings and measured criticism of the industry’s intentions for media, public and government members alike, Egyptians Against Coal also must fight on the international and regional fronts.

More than 75 percent of the cement plants are owned by foreign companies, including large multinationals like Lafarge and ItalCementi. IFIs are also interested, the clearest sign coming from the EBRD. With low levels of awareness about IFI operations in Egypt, it is no surprise that the significance of such meetings go unnoticed here, which is where ECESR’s role begins. Writing a cautious letter as to whether EBRD would, or is intending to, fund the switch to coal for Egypt’s cement industry and detailing the negative effects of such a decision, ECESR received a surprising reply. The EBRD unashamedly stated its support for coal in steel and cement industries where there are no economically or technically viable alternatives available.

In response we have put together a detailed technical memo, responding to each and every justification their short letter offered for their investing in coal for cement in Egypt.

Addressing their key points we show that

Overall what is most worrying about the EBRD’s potential funding coal for cement industries, is the laissez faire attitude the bank has in justifying it. The bank is falling back on generalised arguments that show no consideration of the landscape of our country in any detail. If this had been done the bank would realise the cement industry in Egypt occupies a position akin to a monopoly. Multinational companies use subsidised fuel and electricity at the expense of those who really need it, and make profit margins of up to 70%.

Of course cement is a very important component of Egypt’s development which must keep up with the significant population growth predicted in the coming decades. But all other solutions except coal have simply been left unexplored, including the option to import cement itself. If the EBRD had done a detailed assessment of its applicability in Egypt they would have to conclude there is a powerful business lobby holding a government to ransom over the issue of energy sources. Its main concern is profit, not the ability of Egypt’s currently ailing healthcare system to deal with the fallout or the capacity of the already heavily polluted Nile river to take more badly regulated industrial wastewater and the resulting health and environmental problems across Egypt.

ECESR’s correspondence with EBRD on this issue is available in English and Arabic here: http://ecesr.org/en/?p=421803