If fossil fuels’ grip on the Czech Republic’s energy sector remains, as current plans and policies confirm, the country’s support for the Paris Agreement will be nothing but a sham, writes Karel Polanecky from Bankwatch’s Czech member group Hnuti Duha. 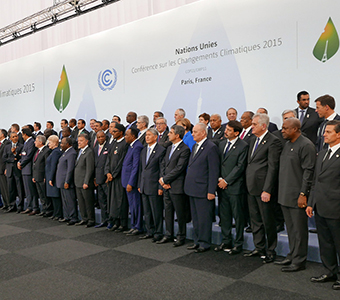 The Paris Agreement, sealed 8 months and signed by more than 175 states by now certainly is a landmark deal in the effort to limit the rise in global temperatures to 1.5 degrees Celsius and achieving a carbon neutral economy in the second half of this century.

I have doubts, however, how many of the world’s leaders understand and are fully committed to the practical meaning of the Agreement. The end of using coal (and lignite) for electricity and heat production will only be the first step. Natural gas and oil consumption need to be reduced drastically as well, not only in the energy sector. But such a radical transition away from fossil fuels is most likely not to be found in the energy strategies of many countries.

It is politically much easier to support the Paris Agreement than a particular wind power plant project or to propose a support scheme for renewables which would lead to a higher price for electricity.

For example the government of the Czech Republic plans that 56 percent of energy demand in 2040 will be covered by fossil fuels. A carbon neutral economy is nowhere to be seen here.

Even worse, the Czech government is effectively fighting against the deployment of renewable energy sources. Renewable power production stagnates since 2013 because the government rejected the renewables support scheme.

Without a strong renewable energy sector, a carbon neutral economy is not possible. Even proponents of nuclear power have to admit that a complete replacement of fossil fuels by new reactors is not feasible. And despite the large potential of energy efficiency measures, these won’t bring us to carbon neutrality when electricity comes from fossil fuels.

It is politically much easier to support the Paris Agreement than a particular wind power plant project. It is much easier to talk about a carbon neutral future than to propose a support scheme for renewables which would lead to a higher price for electricity. But the Paris aim of keeping temperature growth below 1.5 degrees can be fulfilled only if renewables are developed quickly.

Renewable energy sources, in particular decentralised installations, have one additional positive element that could influence consumers’ behavior. The owner of a house with photovoltaic panels on its roof, designed for his own consumption, knows very well that this energy source is limited. He will be more likely to optimise his consumption than a consumer who is connected to the grid and has the illusion of an infinite amount of electricity. Optimising our energy consumption is a precondition for the much needed change in our energy systems towards carbon neutrality.