How to overcome the stagnation in the Czech renewable energy sector? Ending the government’s crusade against renewable support schemes would be a good starting point, writes Karel Polanecky from Bankwatch’s member group Hnuti Duha, Friends of the Earth Czech Republic. 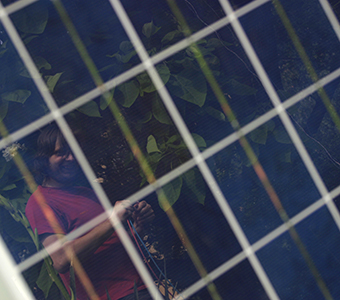 Power production from renewable energy sources in the Czech Republic stagnates since 2013 – the year when the support system based on feed-in tariffs was removed without any replacement. No single wind power plant was built in 2015 and only a negligible number of solar photovoltaic systems were installed on Czech roofs during the last months. While the Czech Republic reaches its (very low) EU 2020 renewable energy target in advance, the actual trend with regards to the transition to a low-carbon economy is negative.

Recently I discussed the possibility of revitalising the renewable energy sector with Dirk Vansintjan, chairman of Ecopower, a successful cooperative in Belgium that has 48,000 members and owns 13 wind turbines with an installed capacity of 23,2 MW. Dirk’s reaction to my description of the market conditions for renewables in the Czech Republic was simple and clear:

“We wouldn’t build any wind turbine under these conditions. And nobody would.”

Like in Belgium and the Czech Republic, wind power needs support schemes if external costs are not included in the price of energy produced from coal and lignite.

Considering its technical potential, roof solar photovoltaic is the second most important aspect for the renewable sector. The main obstacle for its development in the Czech Republic is an unclear set of conditions by the Energy Regulatory Office (ERO). The situation is so dire, that it isn’t possible to calculate the recovery of an investment into a new solar PV system. A proposal by ERO from January 2016 would have meant advantages for large-scale energy consumers while placing increasing costs on small consumers. A campaign led by Hnuti Duha, a Bankwatch member group in the Czech Republic, resulted in massive protests against and the withdrawal of the proposal.

Almost undeterred, the ERO office chief recently declared that they will establish an extra charge for owners of photovoltaic installations – a fixed payment, independent of the amount of electricity produced. She promised the charge won’t be high enough that owners of PV installations would have to disconnect from the grid. But for the transition to a low-carbon economy, such a promise is almost ironic. The important question is whether, with the new charge in place, it would be economically viable to install a new solar PV system. Representatives of solar PV companies should be consulted in this decision. While grid costs incurred by PV owners should be covered by them, their investments shouldn’t be disqualified even before their economic viability is being calculated.

To recover the green power sector in the Czech Republic, a lot needs to be done, most importantly the set-up of non-discriminatory conditions for renewable energy producers.