Home > Blog entry > How to start a just transition in Gorj, Romania

An assessment report by Bankwatch Romania in Gorj County, the largest carbon-intensive region in Romania, shows that coal mining and energy production from coal is already inefficient for the local economy.

Hundreds of people are losing their jobs every year and the company that produces coal energy has debts of hundreds of millions of euro. Just transition must be hastened in order to mitigate any further negative impacts on workers in the region.

According to the report, the number of employees in Gorj County in the energy field decreased sharply between 2007 and 2016, with 4 639 people laid off in multiple waves at the Oltenia Energy Complex (OEC). Another 4 000 layoffs are foreseen due to the planned closure of some lignite mines and power plants. OEC is the largest employer in the region, so its downfall will affect the entire community.

Another concern is the financial condition of the company. It still has to pay off hundreds of millions of euro in loans, and for 2019 has to acquire 11 million EU Emissions Trading System (ETS) allowances at an average price of EUR 25 per unit. The Romanian government granted a six-month aid loan of EUR 251 million to cover these allowances. If the company is not able to pay the debt, it is required to start a restructuring process.

Together with the fact that Best Available Techniques (BAT) derogations will expire soon and OEC will have to upgrade its power plants, some of which are more than 42 years old, to reach new pollution limits, it is obvious that the company and the region cannot afford to count on coal in the medium and long term.

To avoid the negative impact the possible collapse of the company may have, it is urgent to plan for a just transition of Gorj. The report shows which financial resources will be available to achieve just transition in the region and analyses the previous implemented European Programmes for regional development and human resources.

Through the Just Transition Mechanism, the EU has made EUR 757 million available to Romania, part of which can be used for the development of Gorj County. The prerequisite for accessing the funding is drafting a territorial just transition plan (valid until 2030) in line with the transition towards a climate neutral economy. Romania can also mobilize funding for Gorj from the InvestEU scheme, Cohesion Policy funds or European Investment Bank (EIB).

Learning from the past

Before planning, authorities need to consider the impact of previous implemented European programmes. In analysing the period from 2007 to 2013, Bankwatch Romania found no clear correlation between the programmes that were implemented and an increase in jobs or drop in the unemployment rate, which remained constant after the 2010 recession. Furthermore, the number of permanent migrants, those who left the region seeking a more stable economic life, increased significantly after 2010. 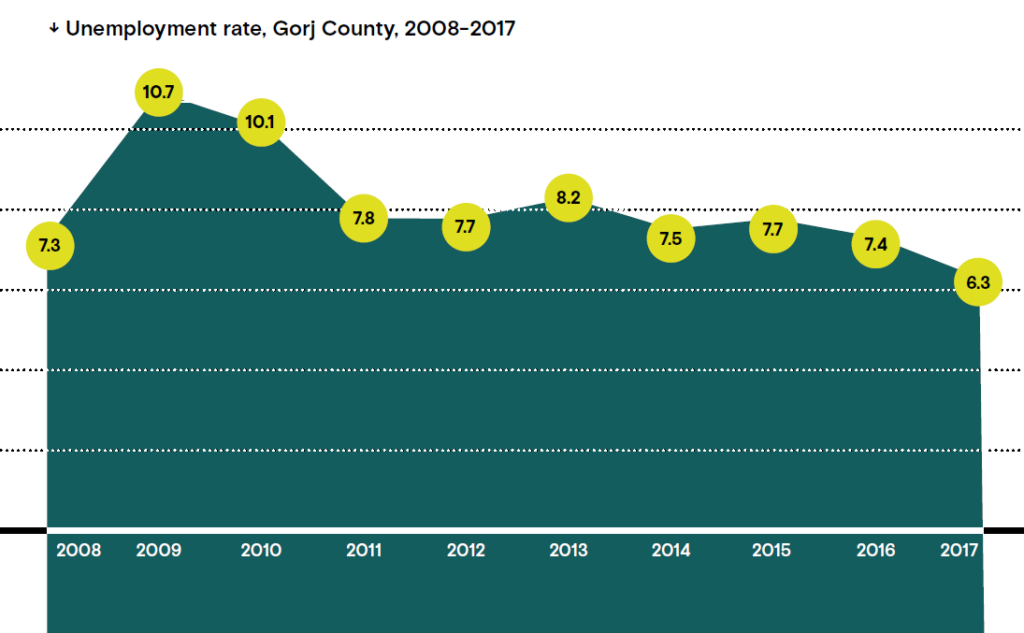 Most business development projects supported by these programmes were focused in Târgu-Jiu, the region’s main city. However, these projects had no clear outcomes in terms of the number of businesses they supported or the viability of those businesses. In smaller towns, projects focused on sustainable development by regenerating certain urban areas, developing infrastructure and public utilities or financing investments in the public transport.

With these findings in mind, Bankwatch Romania urges authorities to ensure that the implementation of the future Just Transition Fund is more successful. In the next financial framework, proper consultation with the local community should be undertaken to identify priority projects and sectors to achieve a fair economic development. Any current or future strategy must be devised with the energy transition in mind, and Oltenia Energy Complex should be included as an integral part of this strategy.