Home > Blog entry > If the EBRD does not lead the energy transition, we will have to do it ourselves

In the middle of last week, negotiators in this year’s UN climate summit in Katowice, Poland, were scrambling to agree on guidelines for the Paris Agreement that would ensure global warming is capped at no more than 2 degrees. At the same time, the European Bank for Reconstruction and Development (EBRD), one of the world’s key development banks, adopted a new energy lending strategy that ends its support for coal but keeps the door wide open for gas. Ioana Ciuta of CEE Bankwatch Network takes a closer look. 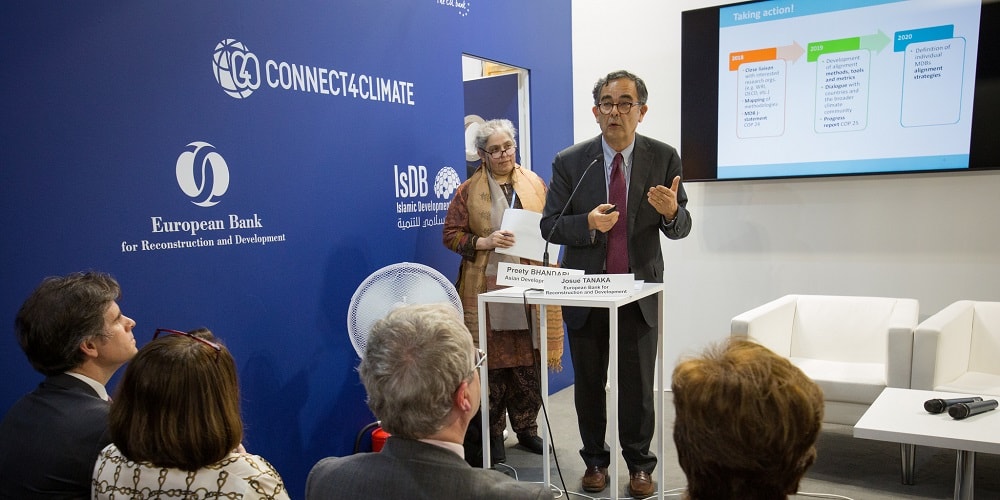 Since the EBRD’s new, rather gas-reliant draft energy strategy was published in September this year, the urgency of tackling climate change has once again been underlined by the IPCC. We need to reach net zero greenhouse gas emissions globally by 2050 in order to limit the catastrophic consequences of 1.5°C temperature rise.

In light of this, our hopes were high that the EBRD would significantly strengthen its commitments on fossil fuel lending in the final version.

But reading the adopted version felt like a cold shower: indeed, the EBRD is completely ending any direct support to coal mining and coal-fired electricity generation, but it remains adamant in supporting gas as a transition fuel, falls short of limiting indirect finance to coal and only aligns its climate ambition to the inadequate nationally determined contributions (NDCs) of its countries of operation.

A fixation with gas

Even though the Bank claims that gas “investments will be subject to an economic assessment (which will account for key externalities and apply a shadow price of carbon)”, the fact that it lists Number/volume of investments in upstream gas as one of its performance indicators does not suggest it is serious about minimising its support for the sector.

Yet gas cannot act as a ‘transition fuel’ even to meet the Paris Agreement target of 2.0°C, let alone 1.5°C.

There has been evidence for more than two years now that no more fossil fuel power generation capacity can be built if we are to stay within 2°C climate change. Climate Action Tracker research also showed last year that unabated gas-fired plants are very much unsuited to the targets: the 1.5°C target would require that such plants are completely phased out by 2050.

Even the (so far) conservative World Energy Outlook by the International Energy Agency released recently came with a clear warning “We have no room to build anything that emits CO2 emissions”.

The EBRD acknowledges that “the sustainability, economic feasibility and energy security implications of individual gas options will be context specific and should be assessed on an individual basis against a variety of criteria”. But in an Annex to the strategy, which zooms into Western Balkans energy scenarios, a coal-to-gas switch is presented as the most cost efficient. And this for a region which hardly has any domestic gas resources and relatively little gas infrastructure. This sounds both expensive and risky, not only climate-damaging.

One of the issues raised by Bankwatch during consultations has been the need for the EBRD to condition any investments in fossil-fuel-heavy companies on decarbonisation plans. Yes, the new policy encourages companies with significant carbon assets to develop decarbonisation plans. But looking back a few years at what else was “encouraged” does not give great hope. The Kyoto Protocol? Encouraged! During this treaty’s lifetime global greenhouse gas emissions accelerated at close to catastrophic rates.

Failing to require decarbonisation plans means that, for example, Serbian state-owned energy mammoth EPS, will be eligible for EBRD financing for renewable energy projects or grid improvements, while it is building a new 350 MW coal power plant and plans to expand lignite mining until at least 2060. Simply put, to have its cake and eat it too.

NDCs – a disclaimer bigger than the title

Responding to the numerous comments received during the public consultations that nationally determined contributions (NDCs), or governments’ climate action pledges, are not enough to meet the Paris Agreement goals and that the revised energy strategy must follow the latest IPCC findings, the EBRD makes the point that it “does not take a formal position on the adequacy of current NDCs of any of its countries of operation and recognises that the quality and ambition of NDCs varies across countries”.

An example of what this means in reality is the Western Balkan countries. While all of them pledge decreases compared to the baseline year, in reality, because of the fact that massive decreases already took place due to de-industrialisation, most of the countries actually plan to  increase their emissions year by year and expand their coal fleet. Only Albania has pledged an NDC that will actually require it to make cuts compared to 2012, while Macedonia has also given recent signs of hope by supporting the High-Ambition Coalition in the international climate negotiations.

A ray of hope

In spite of the disappointment of the EBRD’s energy sector strategy, December 13, 2018, should also be remembered as the day when the milestone of one thousand fossil fuel divestment pledges was reached, totalling nearly USD 8 trillion in value.

In stark contrast to the 100 companies responsible for over 70 percent of the world’s greenhouse gas emissions, it will take the power of millions of us to hold the institutions which support them accountable. The EBRD can be sure that we will keep working hard to make sure it does not use a single cent more to finance fossil fuels and other unsustainable energy.