The European Bank for Reconstruction and Development helped solve conflicts between locals and Ukrainian state company Ukrenergo about an EBRD financed transmission line. On close inspection, the case illustrates that without close monitoring and support for local communities, it is left to chance and locals’ dedication that conflicts are being noticed in the first place. 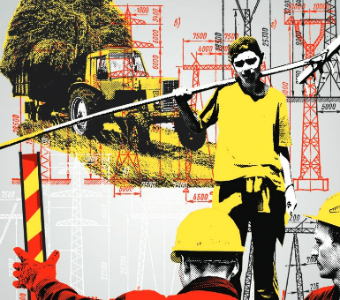 In a media release from last month, the European Bank for Reconstruction and Development highlighted its role as facilitator in a conflict between Ukrainian state energy company Ukrenergo and a local community. As a Ukrainian campaigner who knows Ukrenergo’s heavy-handed way of dealing with people, I appreciate how the EBRD helped bring Ukrenergo to its senses. The story however also illustrates how important it is that locals have sufficient information about their rights and confidence in demanding them to be respected.

The originally planned route that the EBRD had approved by-passed the village. Yet, facing obstacles with the planned routing, Ukrenergo built the transmission line along an already existing line going through the village. Instead of dismantling the old transmission line that had irritated people for a very long time, Ukrenergo came and added new, much bigger pylons. Understandably, villagers were outraged and decided not to tolerate the state company’s disregard of their interests.

Between August and November 2009, locals blocked the construction site and prevented workers from building the transmission line for almost three months, before regional authorities decided to bring in police forces. On November 16, more than 100 policemen – from other districts, to avoid sympathisers among them – arrived to break the blockade, leading to violent clashes between the two groups.

In a brutal struggle that involved the beating of elderly people and women the police secured the construction of a transmission line that should had never been there. (Ukrainian TV news reported from the site showing the violent clashes. See the video on YouTube.)

Even though, related to another Ukrenergo project, the EBRD had been warned that Ukrenergo paid little attention to public consultations, it was not until the beginning of November 2, 2009 that it learned about the change of route, after the National Ecological Centre of Ukraine (NECU) started monitoring the situation in Usatovo. Two villagers approached EBRD representatives at a public hearing on another transmission line to be financed by the EBRD (they covered the costs of the 450 km trip on their own).

In the following weeks, intensive communication and investigations led the EBRD to publicly urge Ukrenergo (pdf) to halt the construction of the transmission line through Usatovo and threatened to suspend the loan for the project. The EBRD’s pressure eventually led to a six-party agreement, signed in June 2010, about the relocation of the transmission line and one has to appreciate the EBRD’s Environment and Sustainability Department who did a good job in solving the situation and facilitating between Ukrenergo and Usatovo villagers.

What if locals hadn’t protested?

The crucial lesson to be learned from this is that even though the EBRD reacted swiftly and did not shy away from investigating Ukrenergo’s misconduct (this time at least), it was the local villagers’ commitment that made it happen in the first place.

In a post-Soviet country like Ukraine, local communities and landowners are often not aware of their rights vis-a-vis a state company that’s intent to realise an infrastructure project on the path of least resistance. There may be cases like in Usatovo, which simply went unnoticed because locals didn’t dare to protest or didn’t think it would make a difference.

The EBRD financing also two other transmission lines in Ukraine – Rivne-Kyiv and Zaporizhya-Kakhovska – and has expressed its interest in two more – Novoodeska-Artsyz and the Second Backbone HUV corridor. There are also other projects where locals are likely to be negatively affected by large industry investments.

For these reasons, NECU prepared a leaflet for local communities so they don’t have to face police violence and have proper knowledge and means to demand their rights. The leaflet instructs villagers how they can learn about the projects to be constructed in their village; what kind of documents should they have for their land parcels; what kind of rights they have and how to protect them; where to complain if the compensation was unsatisfactory and how to communicate with international financial institutions.

The leaflet will be distributed to villages where other Ukrenergo transmission lines are being planned. We’re hoping that this will help locals to protect their rights and that the EBRD will again be helpful with solving such issues.