On a visit to the Kolubara mining complex in Serbia, Bankwatch staff was denied a meeting with the mining company, because of them caring for the environment. 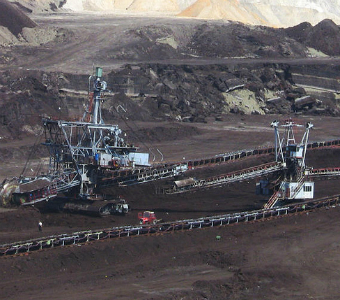 Regular readers of Bankwatch’s website will already be familiar with the Kolubara mine ‘environmental improvement project’ in Serbia, for which the EBRD signed an EUR 80 million loan in 2011.

The EBRD’s claims of environmental improvement are ringing very hollow for local people affected by the project, including those in the village of Barosevac, who this week received a response to an official complaint they recently submitted to the EBRD’s Project Complaint Mechanism. Their complaint was rejected because “[w]hile EPS Kolubara Environmental Improvement […] is a Bank Project, the scope of its activities does not include field B of the Kolubara basin” and furthermore “this project has not yet started operations and none of the loan has yet been disbursed”.

Kolubara mining complex is part of JP Elektroprivreda Srbije (EPS), the state-owned energy company in Serbia. The entire complex covers an area of approximately 600 km2, with a number of mining fields. In Serbia 69% of total electricity in 2010 was based on lignite, out of which 75% originated from the Kolubara mines.

By chance we visited Barosevac this week with my Bankwatch colleagues from Macedonia and the Czech Republic. It is obvious that the affected residents are frustrated. They expected that the EBRD would bring European standards to the Kolubara mine operation, including on the most difficult issues such as resettlement of people affected by the mining operation. But they found the EBRD’s excuse rather poor. The EBRD says its operations cover field C plus the Tamnava West field, but in fact fields B and C are connected in one pit and at least one of the complainants has a document which clearly states that his property is in the exploitation area of field C.

The loan might not yet have been disbursed, but the EBRD has already signed 5 loans with EPS worth EUR 315 million. The first, from 2001, planned to address “public information and consultation (particularly for new developments)” (Source) by the EPS company. Evidently the EBRD must be satisfied with EPS’s progress on this front if it continues to lend to this client.

Although the money is not yet disbursed for the Kolubara mine project, EPS is supposed to implement an Environmental and Social Action Plan which among other topics requires it to “appoint community liaison offices” and set up a “grievance management system” within one month of signing the agreement.

As a part of our visit, we requested a meeting with the Assistant Manager for legal affairs, who is managing the grievance procedure and responses to comments. We wanted to find out first hand how this grievance mechanism works, but the meeting was denied. Later we learned why – the Director of the Environmental Protection Department had written to his colleagues in EPS:

Dear Sirs,
I ask you that *under no circumstances should you talk* to the gentleman from the NGO CEKOR without the presence of Mr. Miroslav Spacojevic and myself. Namely, this concerns issues and actions that could cause long term and far-reaching damage not only to RB Kolubara and JP EPS, but also to the entire state. I note that their primary goal is the decarbonisation of Serbia. I note that RB Kolubara has already had very negative experiences with them. It is known that the activities of said NGO are in the field of ENVIRONMENTAL PROTECTION JP EPS.

As we were not able to speak to the EPS staff, we spoke with local residents in the towns and villages around the mine. Even people who are in the process of resettling have never heard of either the community liaisons or about the grievance mechanism – something that it is badly needed.

In one of villages – which has already nearly been completely resettled we met a Bosnian family. The land to which they will be relocated is the third place they have lived in, but they have never moved by choice. First they were forced to move when they fled from their home in Srebrenica, Bosnia in 1992 during the war there, and now again they are being removed for the sake of the mining operations in the Tamnava field of the Kolubara mine.

These people left 15 hectares of their own woods and land in Srebrenica when they left, only to come here and work in other people’s fields and houses for years. Over a period of 20 years they managed with their hard work and some help from relatives living in France to build themselves a household where they keep some chickens and two cows, living from their agriculture. Their children are not with them – their son is working in the city where he lives with his family, but their daughter was not so fortunate and died ten days before we visited them, after years of sickness and four operations.

On top of their family tragedy, they will now also be leaving their household of 1.4 hectares of land with a nice but modest house in it, replacing it with land of only 0.35 hectares. They were given about EUR 70 000 for their land, out of which they are buying a new, much smaller household in the neighbouring community of Lazarevac. They are not satisfied with the compensation, but although they mentioned complaining to the company, it did not help them at all, so they had to take what they were offered and move to Lazarevac.

So now, after having to rebuild their life once when coming to Serbia, they will have to do so again.

This family is only one of the many that will be or have already been relocated because of the mining operations. We talked to several other families, but they all shared the same sentiment – resignation, believing they have no choice and no options.