It appears the EBRD funds are prioritised on the first-need service basis rather than the long-term strategy goals identified by the EBRD in both the public transportation and water sectors. 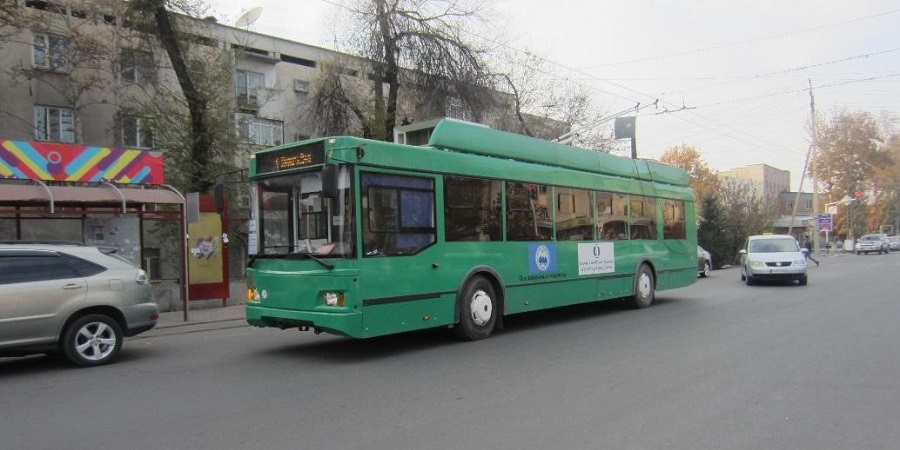 The European Bank of Reconstruction and Development (EBRD) has invested more than EUR 650 million in support of the Kyrgyz Republic since the Central Asian country gained its independence following collapse of the Soviet Union in 1991.

One of the core objectives of the EBRD in the Kyrgyz Republic is to address inclusion gaps in relation to gender equality.

In line with its goals, the EBRD has provided a loan of EUR 5.7 million and a grant of EUR 3.1 million to implement the modernisation of bus and trolleybus fleets, the introduction of an e-ticket system, staff training and improvement of technical equipment in the country’s second largest city of Osh. In addition to the public transport project, the EBRD has also provided more than EUR 10 million to rehabilitate wastewater and drinking water supply infrastructure in Osh.

In 2016, the government of Switzerland and EBRD collectively provided funding for a new wastewater plant in the city of Osh. The EBRD extended a EUR 3 million sovereign loan and Switzerland a EUR 5.05 million grant for the project, undertaken by the Osh Water Company, a municipal water and wastewater operator. The works included an upgrade of existing facilities as well as the installation of brand new equipment.

Researchers, including this author, travelled to Osh to conduct a survey on the impact of these projects on gender equality in the city’s public transportation and water sectors in the month of October 2017. The EBRD’s investments in Osh city were largely welcomed and supported by residents who participated in the field survey. The research survey focused on acquiring data based on age, gender and occupation in the public transportation and water sectors. Whilst the gender-mainstreaming study objective was focused on gender inclusion, the survey has revealed the problems with accessibility for disabled residents and recurrent issues regarding school children’s safety in private transportation.

In context with the methodology of the research, additional questions have been prepared for the Osh city Mayor’s Office and municipal services. However, the city officials declined to be interviewed citing procedural requirements for the meeting with researchers on initial visit to the Mayor’s administration. In the days and weeks after the first visit, the city administration officials failed to respond in a timely manner or demonstrate their willingness to provide information for this survey during research mission in October 2017.

Nonetheless, researchers established that the EBRD’s objective to ‘improve human resource policies and practices both from equal opportunities and commercially focused perspectives’  had yet to be fully implemented for both project aims  to include a gender inclusion component.

Indeed, in a response letter to this study, the EBRD acknowledged the challenges of gender mainstreaming in the Osh city municipality. ‘The Gender Advisory Services Programme for the Osh Auto Public Transport Company started in 2015 and is scheduled to finish in mid-2018. The total cost of the assignment is EUR 179,928. The Programme was developed by the bank after pre-investment due diligence revealed that only 20 of the Company’s 236 workforce were women and only one of their 164 drivers was female. The due diligence revealed that the high staff turnover is one of the big challenges – for example, in 2015 they have reported a loss of 50% of their drivers.’ according to the EBRD.

The research findings in Osh are consistent with the conclusions of the paper ‘Gender Equality Initiatives in Transportation Policy’ authored by Yael Hasson and Marianna Polevoy who found that ‘The travel patterns of women differ from those of men. These differences are linked to gender inequality within the home and the labor market, urban structures, and the processes of socialisation and education. Women and men make different use of a shared system of transportation’.

According to the bank’s announcement the ‘EBRD-supported gender advisory services programme will see the city’s authorities and the Osh Auto Transport Company work together to offer improved job and career growth opportunities to women in the company’.

However, the Osh city development plan 2016-2020 does not stipulate career opportunities for women in the public transportation and water sectors or include objectives for the municipal services in the same period.  It does include a chapter which underlines priority for the gender policy and support of women. In the expected outcome, the development roadmap implies more job opportunities will be created for women and youth in Osh, which seemingly has declarative intent rather than a realistic plan based on an agreement.

Furthermore, the Mayor’s Office pledge, in the development roadmap for greater transparency and open access to public and civil society organisations falls short of actual delivery of policy. The affirmed goal of close cooperation with public and civil society regarding evaluation and monitoring of the city development programs raises questions regarding lack of communication in the Mayor’s Office.

The city development plan has a detailed description of expenditure for the public transportation sector which includes modernisation of the bus and trolleybus fleet, introduction of an e-ticket system, staff training and improvement of the technical equipment, but a  gender component of the EBRD funded project is not included in the city’s expenditure plans.  In a similar fashion, the city’s plans for the Water Company doesn’t include expenditure for an inclusive  gender policy.

Previously, the media coverage of the Mayor’s Office roadmap 2016-2020 highlighted deficiencies in the city development plan. The RFE/RL Kyrgyz language service (Azattyk) report stressed the city administration’s immediate focus on infrastructure projects and the lack of human development programs in the plan itself. It is unclear how the city authorities conduct or implement their original development target goals with respect to gender-mainstreaming.

It is even less clear whether a commitment on gender equality is part of the city administration’s long-term planning for the public transportation and water sectors, despite the official narratives.

The research team was unable to verify or observe the EBRD’s ‘work-in-progress’ in the Osh municipal services regarding gender inclusion, due to the city administration’s failure to collaborate with observers on the ground.

Throughout the month-long research, the team has discovered acute concerns and problems regarding functionality of the public and private transportation and water services. Just as in the country’s capital Bishkek, the city of Osh may require expansion of the public transportation routes within city limits in addition to existing geographical coverage.

Respectively, the Water Municipal Company will require enhancement of the communication policy with city residents which seems inadequate at its present level, more efforts to maintain an uninterrupted supply of water throughout the year, improvement of the quality of drinking water during rainy seasons, cooperation with local civil society organisations and activist groups on the promotion of water conservation practices in the city.

The gender-mainstreaming study objective of the research mission couldn’t be fully achieved as a result of the Osh city administration’s failure to communicate with the team after the Presidential election. It appears the EBRD funds are prioritised on the first-need service basis rather than the long-term strategy goals identified by the EBRD in both the public transportation and water sectors.

It is recommended that the EBRD conducts further consultation with clients on bringing focus back to the gender component in the decision-making process in the local administration and municipal companies; facilitates open access for civil society organisations to the information on gender equality in the municipal companies of Osh city; take steps to undertake annual research and analysis in the public transportation and water sectors based on gender component; improve the city administration’s communication strategy with the public and civil society organisations;  include the perspectives of women and youth in the decision-making process;  integrate more women in planning and implementation of development plans for the municipal services; and  introduce annual target goal parameters for gender equality in the public transportation and water sectors.

This essay is a summary of a report produced for Bankwatch: