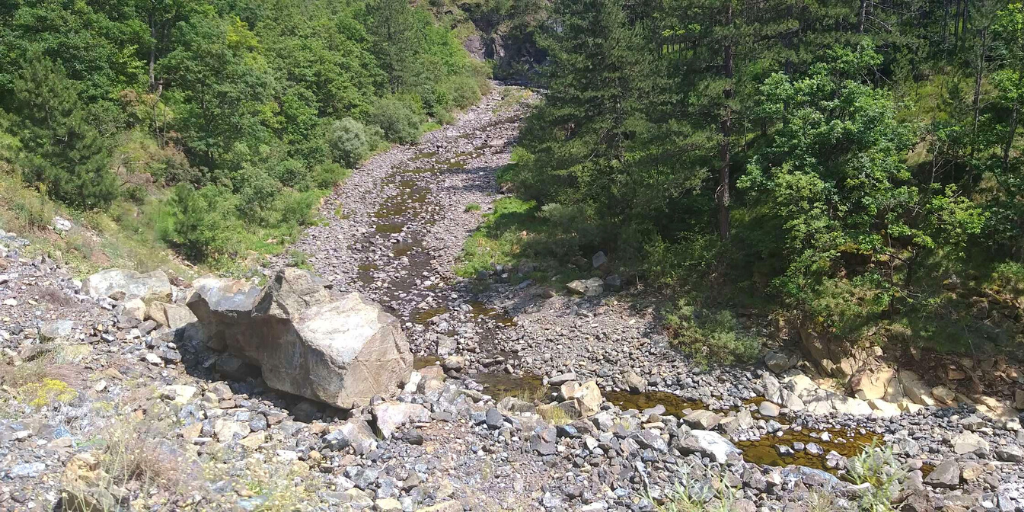 Together with the Ecological Association Rzav from Serbia, we’ve therefore submitted a complaint to the EIB’s Complaint Mechanism, both on the EIB’s failure to respond and on the environmental damage caused by the plants.

The Beli Kamen plant (1.68 MW) started operating in 2016 and the Komalj plant (0.6 MW) in late 2018. The investor is Zlatiborske Elektrane Ltd, which also has plans to build a third plant, Peta, just below Komalj. Both existing plants were financed by the EIB via loans for SMEs and priority projects channelled through Banca Intesa Beograd and Crédit Agricole Srbija. Bankwatch discovered this by chance in Serbia’s pledge registry, so concerns could not be raised before the construction.

The plants are in the Zlatibor candidate Emerald site, first proposed in 2006, and in Zlatibor Nature Park, established in 2017. Yet no environmental assessment was done before they were built.

Damage to the Crni Rzav

Research by WWF Adria carried out in 2020 shows that 9.2 kilometres of river between the intakes and Komalj powerhouse are affected, as well as additional damage downstream from Komalj. A study on macroinvertebrates showed that below the two hydropower plants, the river status was generally poor, while the river stretch not impacted by hydropower had a generally good status. Stone crayfish (Austropotamobius torrentium) was found in 2018, but not in 2020.

A study on fish also showed impacts that will also have serious consequences on species that prey on them and are protected in the Emerald site – otter (Lutra lutra), black stork (Ciconia nigra) and kingfisher (Alcedo atthis).

How did this happen?

According to the EIB’s rules, when it finances projects through intermediaries, it may get involved in doing environmental and social checks on projects but does not commit to. It is not clear whether the EIB did any assessment of the Crni Rzav plants or not.

And since it doesn’t publish any information about sub-projects financed via intermediaries, there is no chance for the public to come forward and raise concerns either.

It is therefore left to intermediaries like Banca Intesa Beograd and Crédit Agricole Srbija to do environmental assessments, despite the low likelihood that they have expertise in EU law or the EIB’s environmental and social standards. But why would intermediaries bother themselves  with such details anyway? The likelihood of anyone finding out their role in the project was low, as was the likelihood of the Serbian authorities properly enforcing the law. And the guaranteed profits – thanks to the feed-in tariff system – were high.

First steps towards tackling the problem

Recognising the issues with its hydropower financing in the Balkans and elsewhere, in 2019 the EIB published its hydropower guidelines, which introduce some helpful new clauses, such as requiring intermediaries to provide more detailed information to the EIB on planned hydropower investments, to enable the EIB to decide whether to get involved in environmental and social assessment of the projects or not. It also states that intermediaries have to disclose a list of hydropower projects they are financing on their website and promptly address any queries from local communities or civil society organisations.

This is all good, but given the document’s ‘guidelines’ status, it is unclear whether it is enforced in reality and embodied in binding EIB contracts with intermediaries.

Next week the EIB’s Directors will decide on the Bank’s new environmental and social policy, which includes a long-awaited standard for financial intermediaries. But the final draft is a damp squib.

It once again fails to require the public disclosure of at least high-risk intermediated projects, denying the public the right to know how public money is being used and to raise any concerns with the EIB.

And the EIB once again fails to commit to being involved in environmental and social checks even on high-risk intermediated projects. The same goes for monitoring. The intermediaries and project promoters get to continue policing themselves.

The EIB board of directors must take action

Next week, as the EIB’s board of directors decides on the draft policy, it must demand more. In 2020, a third of the Bank’s investments – worth EUR 22.6 billion – took place through financial intermediaries. Failure to reign in such a high proportion of the Bank’s lending is a huge risk for the EIB’s and ultimately the EU’s reputation.

No-one is expecting the EIB to get involved in due diligence for every single tiny loan carried out via intermediaries. But it must take responsibility at least for those which require an environmental impact assessment under EU law, as well as those which require screening to see whether they need a full environmental assessment. A list of such projects is already defined in Annexes I and II of the EU directive on Environmental Impact Assessment. Such projects must also be publicly disclosed before they are signed.

Other international financial institutions such as the EBRD, IFC and Green Climate Fund have taken steps to improve standards in this field, leaving the EIB lagging far behind. An analysis we produced last September showing the EIB’s inadequacies regarding intermediaries remains equally valid today, as the second draft of the policy has brought little change.

In other fields, mainly climate action, the EIB has shown it can be a leader. Gaps remain, but the EIB was a real pioneer among financial institutions by virtually excluding fossil fuel financing in 2019. It must do the same on financial intermediaries if it is to retain any credibility as it expands its ambitions to become a development bank.

This publication was updated following a reply by the EIB to Bankwatch on 14 March 2022.