As rains cause mudflows in Georgia’s mountains, locals from different regions unite to protest hydropower developments in geologically unstable areas. 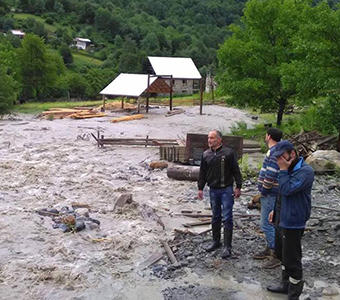 In the night of June 30, strong mudflow hit the village of Nakra in Upper Svaneti, in Georgia’s Caucasus mountains, damaging several properties and destroying two bridges. Caused by torrential rains the mudflow from the Lekvedari river brought large amounts of silt and stones close to the village center.

The natural catastrophe occurred at a time when geological surveys are underway for the construction of a tunnel and a 13m high dam to derivate water from the Nakra river to the planned Nenskra dam about 4 km upstream of the village.

A video from the June 30 mudflow. (by Nino Vibliani)

According to locals, the mudflow is one of multiple proofs for the geological sensitivity of the area which is not fit for a dam. Geological instability combined with a dam would pose a significant threat to their lives, they say. The Nenskra dam is currently under consideration for financing among several international lending institutions, including the European Investment Bank, the European Bank for Reconstruction and Development and the Asian Development Bank. 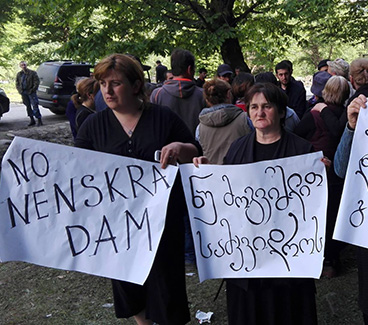 More about the project

People in Nakra have raised their concerns continuously with the dam’s promoters – the Korean K-Water and the Italian subcontractor Salini Impregilo. They fear that, if the derivation channel is built on the Nakra river, the river will be left with too little water to transport sediments brought by its tributaries. Currently, the Nakra River flow is strong enough that it washes the debris away from the village. But once most of the river’s water is being diverted, the debris might block the river stream and cause flooding of the Nakra village.

Svaneti is a geologically sensitive mountainous area prone to landslides and mudflows, and the situation around the planned reservoir and the village of Nakra is critical. The 80 or so households in the village have already suffered from geological instability in the past. The Nakra river and its tributaries bring debris and floods nearly every year. A mudflow of even bigger scale occurred on the Lekverari river in 2001, washing away a plot of land. In 2010, the Leknashera river, another mudfow river upstream of the Lekverari, completely covered the cemetery and agricultural plots in the village. 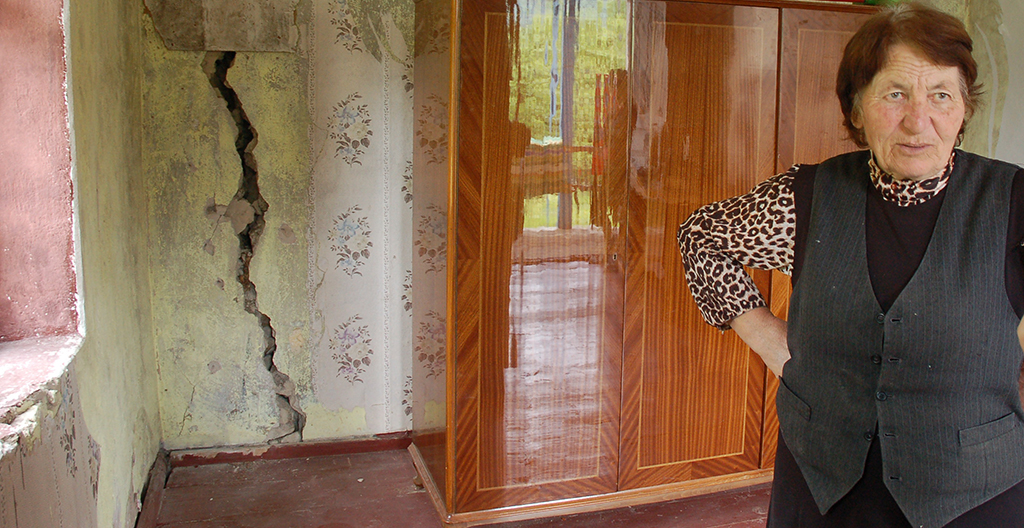 Multiple houses in Nakra have cracks and other damage caused by landslides.

While the developers acknowledge this risk, the project documentation offers neither thorough examination of the geology nor a detailed mitigation plan. According to a review (pdf) of the Nenskra Environmental and Social Impact Assessment (ESIA), the geological hazards and potential adverse impacts on locals have not been properly evaluated. In spite of this, the Ministry of Environment issued a positive ecological expertise report on the project, effectively giving it a green light.

Distant communities unite in their struggle

Residents from Kazbegi who oppose the Dariali hydropower plant met the villagers affected by the Nenskra dam on July 3 to demonstrate their solidarity and support. The meeting took place in Chuberi, a community to host the Nenskra dam power house and to suffer of economic displacement. Kazbegians described their personal experience with hydropower plants and the negative effects these have had on their lives. They also encouraged the people from Chuberi and Nakra to continue defending their interests and engage with the international financiers of Nenskra dam.

Following the meetings, the student movements “Green Fist”, “Auditorium 115” and “Georgian Young Greens” from Tbilisi joint the villagers in a protest action at the dam’s construction site. Witnesses reported that police forces intimidated the drivers of buses that were to bring students to the construction site, but that the action was nonetheless held peacefully with approximately 300 participants.

During the action, the Chuberi locals repeated their demands that:

As opposition to hydropower developments becomes more and more widespread in Georgia, the government and international financiers of the projects should be wary of alienating communities across the country and postpone further new hydro constructions until a proper, environmentally and socially acceptable strategy has been developed for the country’s energy and hydropower sectors.