Poland is on course to place further large roadblocks in the way of the European Commission’s Roadmap 2050 towards a low-carbon economy unless certain demands being insisted on by Warsaw are met. These include the granting of free allowances for all 16 power plants that Poland has asked to be supported under the EU’s Emissions Trading Scheme. 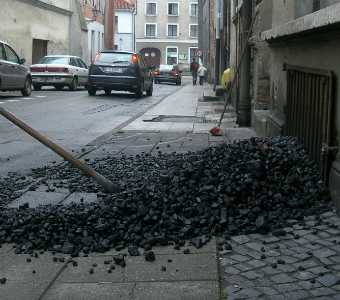 (This post is an article from the upcoming Issue 51 of our quarterly newsletter Bankwatch Mail.)

It was of course the EU’s largest new member state that in June last year vetoed the raising of the EU’s emissions reduction target from 20 to 30 percent. Similar tactics, fear Polish climate campaigners, are to be expected this year, perhaps as soon as tomorrow’s Environment Council Meeting.

In Poland itself, such is the strength of the Polish energy lobby that propaganda about the potential threat to the country posed by the EU climate and energy package permeates public debate and the national media.

The most recent example of these lobby efforts came in February with the publication of a report from the Polish Chamber of Commerce (Krajowa Izba Gospodarcza), together with the biggest Polish energy companies Tauron Polska Energia S.A. and PGE (Polska Grupa Energetyczna) S.A., that claimed that the costs of implementing the EU climate and energy package would be four times higher than estimations made by the World Bank and the European Commission (pdf).

However, as pointed out by 22 environmental groups – including Bankwatch – in a press statement released in late February, the report authors have conveniently left out a few details, allowing them to arrive at their magic number.

Left out altogether of the calculations in the industry report are the externalities of industrial energy production, the costs of coal subsidies and imports of coal, that reach 15 million tonnes of CO2. Hence, the baseline scenario against which the costs of the EU package are compared is grossly underestimated.

The business as usual scenario presented in the report includes investments in new coal-fired and gas-fired power plants that amount to over EUR 14 billion, representing one tenth of all energy investments required to be made by Poland by 2030 if the country is to be in line with the 450 ppm scenario set out in an International Energy Agency study dedicated to Poland from March 2011.

Yet what the report fails to include in this scenario is the EUR 10-19 billion in external costs passed to society every year by the Polish energy sector. It also fails to take into account the negative consequences of Poland’s growing dependency on imported coal – in 2011 the country imported over EUR 1.5 billion worth of coal. Also not included in the report calculations are the subsidies paid by the Polish government to energy companies – these totalled in excess of EUR 650 million in 2010.

Were these costs to be included in the baseline scenario, it would be found that supporting Poland’s current fossil fuel based energy system costs the Polish government and society at least EUR 15-22 billion every year. These are the costs that the Polish energy companies who bankrolled last month’s report do not want to speak about.

In fact, the true costs of Poland’s dependence on coal run much deeper. The dominant position of coal companies in Polish society weakens public debate, ensures that information about alternatives to coal fails to reach the general public, and thus in fact prevents the country from developing a green economy with new jobs and opportunities. Furthermore, Poles are paying for this coal dependency with their lives: pollution coming from coal lowers the life expectancy of the average Polish citizen by at least eight months, according to estimates by the World Health Organisation for the year 2000.

Ultimately this dependency is affecting the lives of future generations, whose quality of life looks set to become much worse if Poland continues down this dirty route that the industry profiting from it is intent on keeping open for as long as possible.