Georgian public opinion backs the village of Kaishi in the Georgian mountains that defiantly defends its land and tradition against the planned Khudoni dam. The project promoters have now embarked on an all-out promotion campaign including a fake non-governmental organisation. 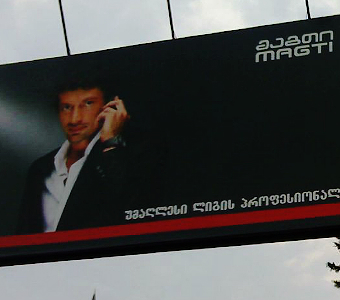 Local communities that are demanding fair treatment when faced with a large infrastructure projects often hear promoters justifying the project with an alleged paramount national interest. It’s another way of saying: “Get out, or we will lose our patience.”

Kaishi, a town in the Georgian mountains of Svaneti, is in this very situation right now. The Khudoni mega-dam is planned to be built where now 800 people live and the land that was theirs by custom was given to the opaque investor Trans Electrica Ltd. for one dollar.

Among the project promoters is also Georgian vice Prime Minister and Minister of Energy, Kakha Kaladze who last week suggested that only a very small group of people are against the project:

“It should not been imagined that the whole population of the region is against the construction of Khudoni. There is a group of people who have a radical approach towards the matter.” (Source: medianews.ge [ka], own translation, emphasis added)

Yet, the people of Kaishi are far from being a small group of radicals who are blocking the region’s development for sentimental reasons. Last week, after a meeting of the representatives of all Svaneti communities, the Kaishi community published an open letter to the government that reiterates the commitment of Kaishi as a whole to protect their village against a project that is unnecessary:

“Thus we are stating that the village of Khaishi will continue to exist and develop normally and will stay loyal to the oath that was given in front of God and our nation against the Khudoni HPP project.” (own translation)

The mentioned oath is a traditional vow taken in the local church. The 200 families who have taken the oath pledge to protect Kaishi from flooding and accept that a curse will haunt them and future generations of their families. (The oath includes some colourful descriptions of the curse.)

Also public opinion in Georgia is far from seeing the Khudoni dam as a project of utmost national interest. In a recent poll on Netgazeti.ge 63 percent of the 1300 participants voted against the project (one vote per IP address was allowed).

The lack of public approval has brought the Ministry of Energy and the investors to run an intensive PR campaign to change public opinion. The campaign includes a range of TV ads with biased or distorted facts and a facebook fan page that miraculously gathered 16 000 likes practically overnight.

Even a front group called Georgian Infrastructural Project Initiative (SIPI) appeared out of nowhere in the beginning of this year with the following mission:

“[…] to inform society with facts and arguments on ongoing and planned infrastructural projects in order for the latter to be correctly interpreted by the people.” (emphasis added)

Although claiming to conduct studies and evaluations of infrastructure projects, the initiative mostly posts news articles to their website and the CNN’s iReport platform (none of the articles vetted by CNN). Almost all articles so far have been weakly veiled promotions of the Khudoni dam or of the project promoters’ activities.

A look at SIPI’s public registry file leaves no doubt that the organisation is nothing but another way of promoting Khudoni. The head of the organisation, Levan Kalandadze, is a close friend and party ally of businessman Irakli Iashvili. (Both are members of the New Rights Party). Iashvili is 50 percent shareholder of Trans Electrica Trading. The other half is owned by none other than Khudoni investor Trans Electrica Ltd. (The purpose of Trans Electrica Trading is not becoming clear from the registry. It only mentions that the company will deal with energy issues in general.)

The claimed openness of Kaladze and other project promoters to discuss with Kaishi and the rest of the Svaneti community will be put to another test tomorrow. Georgia’s Ombudsman Ucha Nanuashvili has invited all interested parties (including the ministry and the investor) for February 28 to discuss the human rights dimension of the Khudoni project. We’ll see who shows up.