Video and pictures from a public action agains lifting the coal mining limits in the Czech Republic that so far have saved towns from being resettled. 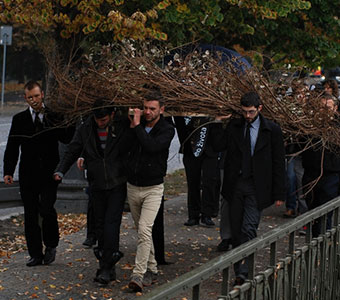 On October 6, Bankwatch member groups from the Czech Republic Centre for Transport and Energy (CDE) and Hnutí Duha held a funeral service to mourn the death of the Czech Republic’s responsibility for climate change. With a three meter tall funeral wreath (see visuals below) about three dozens of citizens grieved the loss of a piece of the Czech Republic’s landscape as well the country’s responsibility for climate action. The performance was a gift for minister of industry who met activists for talks about the current government’s climate and energy policy.

While the funeral was a mockery, the government’s upcoming decision to dismantle limits on coal mining is not. Established to protect the landscape of northern Bohemia and locals from the threat of evictions, limits on mining are keeping more than 1.3 gigatonnes of carbon dioxide in the ground that would otherwise be emitted if the coal were to be mined and burned.

The government is expected to decide to lift the limits on October 19.

Read more background about the mining limits and the impact it would have to lift them on our blog:
Czech coal mining communities are under threat

Visuals from the action 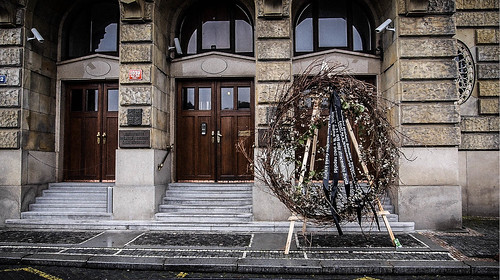 Made possible with funding from