With the energy transition well underway, and the end of the era of coal clearly on the horizon, biomass for heating is gradually becoming a favorite for governments in the Western Balkans and their financial partners. ‘Tree power’ might sound like the greenest kind of energy, but burning timber from forests to heat homes is anything but sustainable. 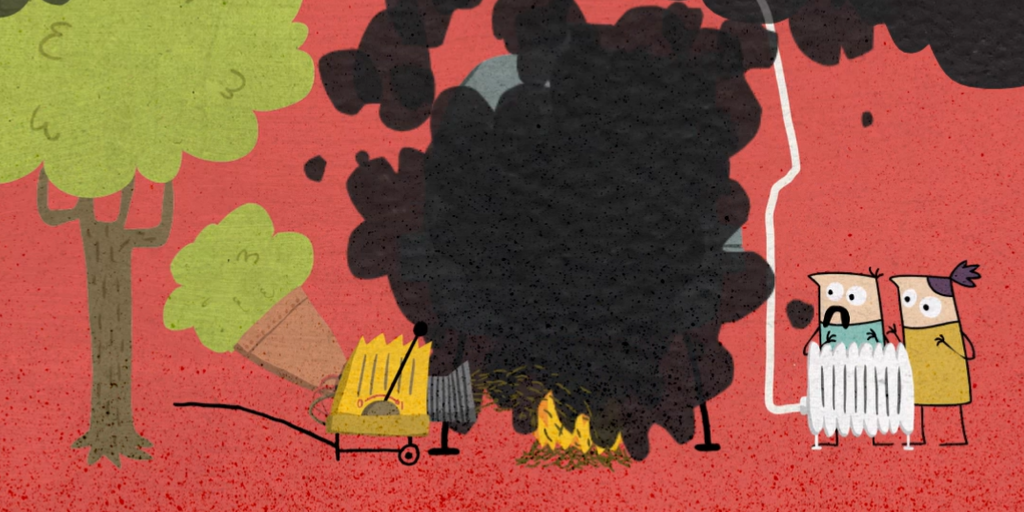 There is a common misconception that burning trees to generate heat can be considered ‘carbon neutral’ because the CO2 released in the process is supposedly re-absorbed by forests. In reality, harvesting and burning woody biomass curtails nature’s ability to capture carbon, and adds this greenhouse gas to the atmosphere just like burning any fossil fuel.

A 2017 study showed that the combustion of wood for heating can produce two and a half times more CO2 emissions than fossil gas, and 30 per cent more than those from coal as per unit of generated energy. So, felling forests, assuming they will grow back in 20 years or more, would create a dangerous ‘carbon debt.’ It does little to cut emissions on a timescale relevant to stemming the climate crisis, as we cannot wait decades for trees to grow back.

And yet, forest biomass still enjoys political backing in Europe. The EU’s Renewable Energy Directive (RED) considers biomass a renewable fuel under certain conditions. The Directive is currently under review and the European Commission has proposed to somewhat tighten the sustainability criteria for forest biomass.

But the proposal still falls far short of addressing scientific evidence warning about the repercussions of forest biomass and threatens to be watered down even further.  Research has shown that harvesting and combusting forest biomass, not only aggravates the climate crisis, it also increases the risk of deforestation in countries where forest management and legal enforcement are insufficient, as is the case in much of the Western Balkans.

Illegal logging in the region is already known to be associated with corruption and organised crime. So, promoting even more forest biomass for heating where legal enforcement remains weak risks facilitating a grey economy.

According to a World Bank study, already in 2013, over 58 percent of the total woody biomass in the Westen Balkans came from unregistered consumption, as opposed to the amounts registered for energy use. In addition, there are still glaring gaps in statistical data on the sources of woody biomass, its usage and export, while there are no proper wood recycling practices exist.

Many towns in the Western Balkans, especially in Serbia and in Bosnia and Herzegovina, have plans for biomass-based district heating plants. But these ambitions could be little more than hot air, if only because there is no reliable data no how much residual woody biomass is actually available in each of the countries. In fact, the World Bank study mentioned above found that, on average, 75 percent of the sustainable technical potential for woody biomass for heating in the Western Balkans was already used.

Therefore, increasing demand for biomass is only likely to drive unsustainable forest harvesting. For example, because Banja Luka has no local source for woody biomass, its 49 MW heating plant uses woodchips transported from 50-100 kilometres away, and still has not been able to meet half of the demand of the wood source for this year, not least in the face of Europe’s energy crunch.

All the warning signs are there for any decision-maker who is still considering promoting forest biomass in the Western Balkans. Local governments in the region that are finally ready to abandon fossil fuels in district heating should stay away from this green mirage.

The growing appetite for forest biomass, not least when it is legitimised by an EU directive, risks channeling government subsidies to a fuel that practically worsens the climate crisis and moves the region away from genuine sustainable energy.

European public finance also has an important role to play in ensuring the Western Balkans’ energy transition is on the right track. The European Bank for Reconstruction and Development (EBRD), as well as other international financial institutions, should fully mobilise to help accelerate the decarbonisation of heating systems. This also means halting the promotion of primary forest biomass within EBRD programmes such as ReDEWeB and Green Cities and within EU investment funds.

The EBRD in particular needs to formally stipulate that biomass – exclusively, secondary woody biomass – may be used in small, combined heat and power installations only when there are no viable heating alternatives. Larger biomass plants should be avoided in order to diminish both the climate and biodiversity risks.

For local governments in the region, and their financial backers, the focus needs to remain on implementing modern and efficient heating technologies such as heat pumps coupled with renewable energies like solar, wind, geothermal power and waste heat from industry or the commercial sector. These measures need to be complemented by thermal energy storage technologies and increased investments in energy efficiency. This way we will be able to not only to help slow down the climate crisis, but also keep homes warm and forests intact.