The Romanian city of Reghin wants its citizens to agree before a potentially harmful formaldehyde plant is built. It has to defend this decision in court. 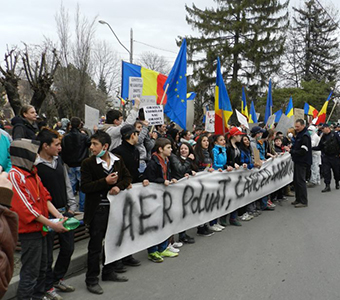 If a city ensures citizen participation in local decisions it is usually understood as a positive step, specifically if said decisions impact the health of locals. The Romanian city of Reghin, however, is currently battling in court to allow its inhabitants to be asked before a new formaldehyde plant will be built in their vicinity.

Formaldehyde, used in resins to bind composite wood products, is a toxic compound known to cause cancer.

The facility is being planned by the Turkish wood-processing company Kastamonu Romania SA, a subsidiary of Kastamonu Entegre which operates plants in Turkey, Bosnia-Herzegovina, Bulgaria, Romania and Russia and is itself a member of the Turkish Hayat Holding, a global player in the construction, wood and energy industries.

In summer 2015 Kastamonu took the city of Reghin to court over a city council decision from April 2015 that makes the construction permit of any industrial activity with potentially significant environmental impacts subject to a local referendum. The council decree came at the time when Kastamonu Romania SA was in the process of obtaining environmental and construction permits for a formaldehyde plant to produce glue for its desks. About half of the planned output of 100 000 tonnes would be sold on the market. 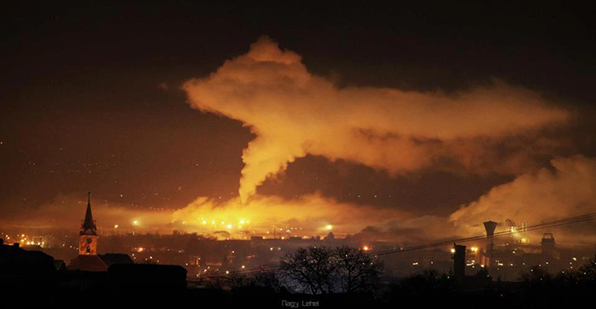 A view of Reghin at night with Kastamonu’s factory dominating the scene. (Image (c) Nagy Lehel.

While the company regards the decree as a direct attack against its plans, the council counters that the act has no connection to the company and that it aims to give local communities a greater say on industrial activities that affect their health and the environment. Such decrees have been adopted over the past years by other local councils in the Mures county to which Reghin belongs. They might be seen as indirect consequences of recent widespread citizen engagement and solidarity against other harmful investments like the Rosia Montana gold mine or shale gas developments.

Kastamonu’s legal pressure against a local community’s participation comes despite the company being a recipient of a public loan from the Black Sea Trade Development Bank (BSTDB), a regional public finance institution whose shareholders are eleven countries in the Black Sea region, including Romania.[1] The bank obliges its clients to observe international requirements on environmental performance and engagement with affected communities.

While the Bank claims that its client has complied with its own standards and with Romanian legislation, the local communities have complained for the past three years [ro] about the environmental and health impacts of the company’s operations as well as the company’s lack of compliance with national regulations [ro] for obtaining environmental permits.

On April 22, 2015, the City Council of Reghin approved a decree on protecting the environment, human health and biodiversity of Reghin. The act requires that a referendum is held on any industrial activity with potential environmental impact included in the Annex 1 of the Aarhus Convention. The Aarhus Convention, an international treaty on public participation and accountability of public authorities, requires its parties, including Romania, to apply public participation in decision-making on activities listed in its Annex 1 (pg. 19).

On July 30, Kastamonu submitted a preliminary complaint with the Reghin City Hall and later the Mures district court asking to revoke the city council’s decision, arguing the city council had no right to decide on industrial activities. In a decisions from December 18 the court sided with the company and annulled the municipal act.

An appeal against the judgement filed by the Reghin municipality is currently pending. 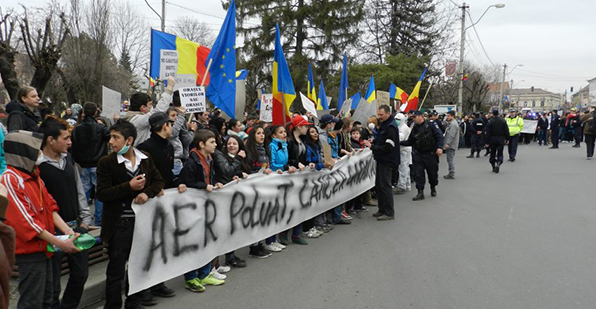 Protests in Reghin against the new formaldehyde plant.

Kastamonu entered the Romanian market by purchasing the door panels production facility in Reghin in 1998. The company’s activities in Reghin have been marred with problems since the company launched production on a particle board factory in June 2012. An inspection by national authorities conducted in 2014 revealed that the facility was functioning without an integrated environmental permit. Although, the company was granted a permit later that year, the Civic Initiative of Reghin, a civil society organisation that is supported by locals claims that the approval was issued on the basis of incomplete health impacts assessment.

The initiative, which monitors Kastamonu’s compliance with national and international standards, achieved in 2015 that an investigation was launched in the wood procurement practices of Kastamonu. The investigation led to the confiscation of 29.000 cubic meters of undocumented wood by state authorities.

“Local communities have the right to judge what is suitable for their area. Building a formaldehyde plant in Reghin with a production capacity of 100.000 tons per year would aggravate the air pollution and have devastating impacts on the health of the community.”

And also the Black Sea Trade Development Bank, as a public lender, should ensure that Kastamonu observes laws and does not exert pressure on locals. As part of the BSTDB loan conditions, Kastamonu is expected to publish a stakeholder engagement plan this year (two years after the loan has been approved), but so far, people in Reghin have not been approached on the matter.

Reghin is not the only town in Romania where an industrial enterprise would have appealed against a state decision. In June 2015, in a town of Sebes, located 100km from Reghin , Austrian particle board company Kronospan has filed a court case against a decision of the Ministry of Environment to cancel the company’s revised environmental permit. Kronospan originally obtained the approval for increasing the production capacity of the formaldehyde without assessing how the change will impact public health and the environment.

Since the start of its operation in 1999, BSTDB has approved nearly 300 projects to the tune of about EUR 3 billion. Russia, Turkey and Azerbaijan received the biggest share of the funding.

More details can be found in BSTDB’s 2014 annual report (pdf).