In just a few months, a protest against a large dam on the Rioni River has grown from a handful of people in Lechkhumi, western Georgia into a national demonstration. On the International Day of Action for Rivers, 14 March, thousands of Georgians made history with the largest environmental protest in the country’s recent past. 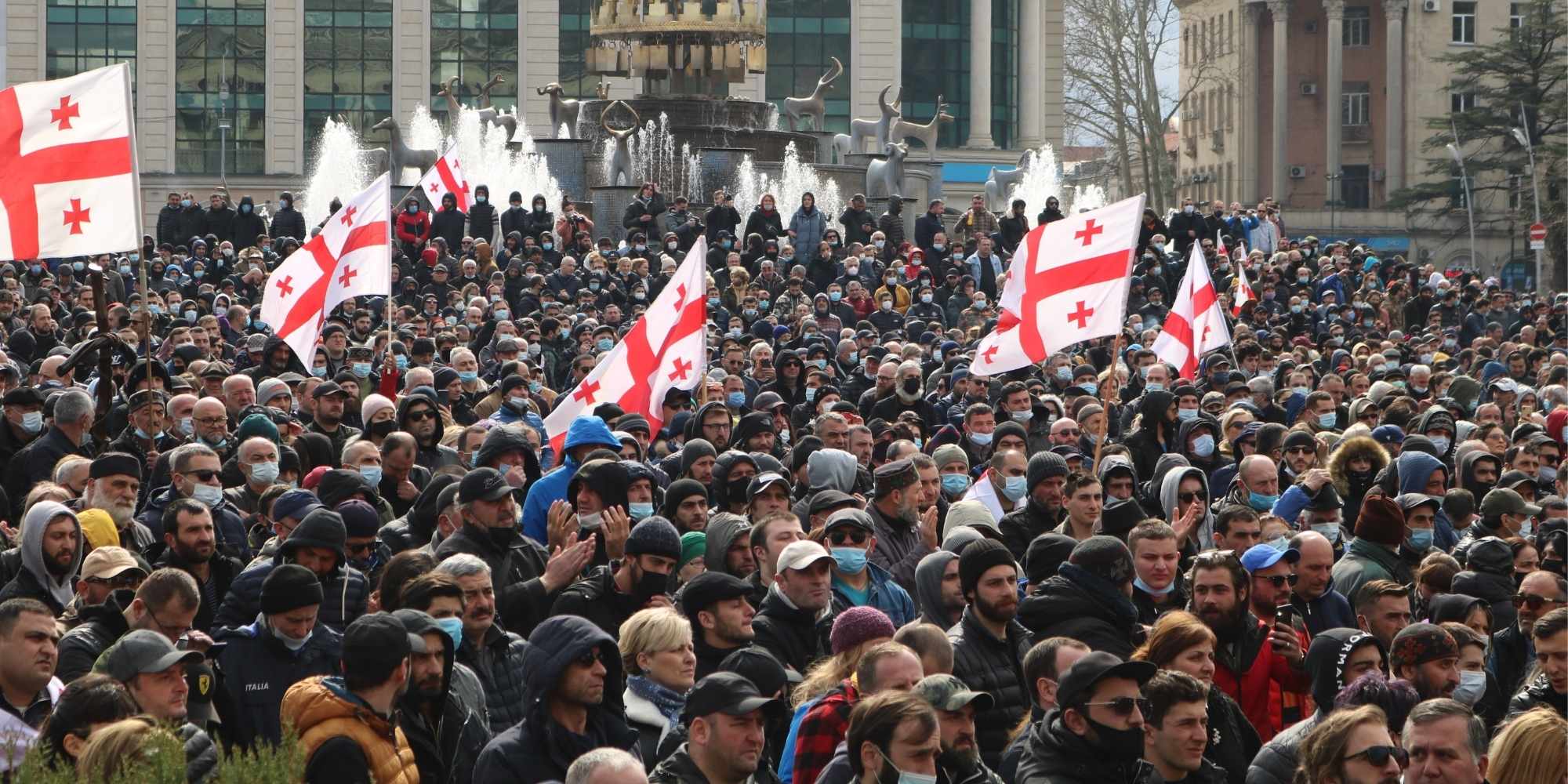 One cold evening in October 2020, Maka, Marita, Varlam and some of the other villagers in Rioni valley decided to start spending the night outside, on the bank of the Rioni River, in an attempt to protect it from the construction of a large dam. They said they would protest until preliminary construction on the 424 MW Namakhvani hydropower plant was stopped and its developer, ENKA Renewables (a consortium of Turkish ENKA and Norwegian Clean Energy), left the valley.

The guardians of the Rioni River, as people later called the protesters, have not gone home yet. Taking shifts, they have spent a collective 166 nights outside, sleeping in tents, and plan to continue until their demands are met. The company has not yet left the valley, either. However, the support the people of Rioni have received from the rest of the country has encouraged them to stand their ground.

What started as just a handful of people protesting to save the Rioni River a few months ago has already turned into a national campaign. On the Day of Action for International Rivers, 14 March, thousands of Georgians came from all over the country to join the guardians of Rioni and make history. It was the largest environmental protest in Georgia’s recent past.

‘No to Namakhvani HPP’, ‘No to Dams in Racha’, ‘We protect our homeland’, ‘Freedom for Rioni’, ‘Solidarity from Pankisi’ – these are some of the slogans on protestors’ posters at the rally held in the western Georgian city of Kutaisi, where media said about 22,000 people gathered.

‘We were five people and today we are thousands because we were standing here with the truth… This gives us the hope that the spirit will never die as long as there is at least one person protecting the truth,’

said one of the leaders of the Rioni protest, 28-year-old Varlam Goletiani, in his address to the audience. He added:

‘People from other parts of Georgia take shifts with us to spend nights in Rioni valley. There is not a place left in the country from where they have not joined us. In this state, we are creating a precedent for protests that are managed by utterly clean hearts and spirits.’

The dam which mobilised thousands

The Namakhvani hydropower plant will be one of the country’s largest. Its reservoir’s mirror surface will cover 610 hectares. It will flood parts of Tskaltubo and Tsageri municipalities, including the villages, cultural heritage, unique biodiversity, and some of Georgia’s precious and expensive micro zones for producing Tvishi wine.

The project poses threats to not only the river’s ecosystem and the region’s unique wine, but also to the population of the Imereti and Lechkhumi regions, scientists say. Its development started without any justification of the economic need for the plant, and the preliminary construction works started without the completion of a number of studies required by law. Furthermore, locals have little trust in the investor – one of Enka Renewables’ shareholders, Clean Energy, previously built another large dam in Georgia whose tunnels collapsed.

If the dam is destroyed due to an earthquake or technical failure, a 34-metre-high wave from Namakhvani’s dam could flood western Georgia’s main city, Kutaisi, estimate seismologists from the Institute of Earth Sciences and the National Seismic Monitoring Centre. This is not just an imaginary scenario, but one that could become a reality, given the strong earthquakes that have happened and could happen again in the area. In an official statement addressing the prime minister, the Institute announced that the project’s environmental assessment does not include proper studies and measurements and that it shows the project will not be built to withstand strong earthquakes.

In April 2020, the Georgian government granted ENKA Renewables permission to start preliminary construction on Namakhvani, but the civil society organisations (CSOs) Green Alternative and the Georgian Young Lawyers’ Association have claimed this was against the law. The CSOs have sued the Ministry of Agriculture and Environment of Georgia to annul this permit, because it was granted without the company providing the studies required ‘to identify possible threats to human life and health, environment and cultural heritage’.

The lack of transparency around the project is also what triggered the community’s protest. ‘Environmental decisions for both projects were made in violation of the law, without the proper inclusion and participation of the public’, reads the people of Rioni’s petition against the construction of Namakhvani and another large hydropower plant planned on the river, the Oni cascade.

They continue:  ‘Additionally… no cost-benefit analysis has been presented, which is required by Georgian law as a part of the environmental impact assessment report’. The economic side of the project has raised a number of questions. In particular, a contract for the Namakhvani project was published that showed the government of Georgia had undertaken to purchase electricity from a private company for 15 years with a guaranteed high price and that it had transferred a large area in the Rioni valley to ENKA Renewables as private property.

The petition #SaveRioniRiver, which gathered more than 10,000 signatures, was sent to the government and the US and Turkish embassies in Georgia. The authors also submitted it to the European Bank for Reconstruction and Development (EBRD), the European Investment Bank (EIB), the Asian Development Bank (ADB) and the World Bank; however, none of the financial institutions has responded yet. Not even after the dispersal of a peaceful protest in Rioni this February by police; not even after police were again mobilised against the protesters in the valley on 4 April 2021 in an attempt to allow ENKA Renewables to forcefully resume construction on Namakhvani.

In this most recent attempt to end the protest, police blocked the entrances to the protest area near Namakhvani and prevented activists from joining the guardians of Rioni. As of 9 April, the blockade continues. Locals have reported that not only protest supporters, but also people who live on either side of the blocked area are not allowed to pass. Public defender Nino Lomjaria, who visited the area on 8 April, called the blockage an ‘unproportional’ measure that limits people’s freedom of mobility.

The company behind Namakhvani HPP has two shareholders: ENKA (90% share) from Turkey, known for construction engineering but with limited experience in hydropower plant construction, and Clean Energy (10% share) from Norway, known in Georgia for building the controversial Shuakhevi hydropower plant, where the main tunnels collapsed two months after it became operational. After three years of repairs, Shuakhevi resumed operation in 2020. However, even after the dam was repaired, a crack appeared in the reservoir, and locals believe that subsequent water leakages in the surrounding villages were caused by the project.

Namakhvani and Shuakhevi are not the only dams in Georgia that have been met with fierce opposition from locals or severe criticism from environmental and human rights groups and international financial organisations.

‘There are the same problems in Enguri valley, in Rioni valley, in lower Svaneti, in Dariali gorge, [with the] Khadori hydropower plant’, Zurab Nizharadze, an activist from Svaneti, told Georgian media during the #SaveRioniRiver protest. Nizharadze has fought against the Nenskra and Khudoni hydropower plants which are planned to be built in Svaneti and are financed by the EBRD and EIB. In 2020, after two years of investigation following the complaints of local activists, the EBRD’s and EIB’s independent mechanisms announced that the Nenskra plant did not comply with international standards. The mechanisms said that both banks had violated their own environmental and social policies.

‘The main problem that we face regarding hydropower plants in Georgia is that the government considers their development as the main answer to the existing challenges of Georgia’s energy sector development, while the country lacks even a strategic plan for energy development. Due to the fact that Georgia is a contracting party of the EU Energy Community, the existing practice of decision-making and supporting hydro projects violates the requirements of the Community, too’