Home > Blog entry > The EBRD: Fueling the future, or stuck in the past?

A closer look at the projects that the European Bank for Reconstruction and Development has financed in the energy sector in Middle East and North African countries reveals that, despite the bank’s rhetoric about promoting sustainable energy, its balance sheet has fossil fuels all over it. 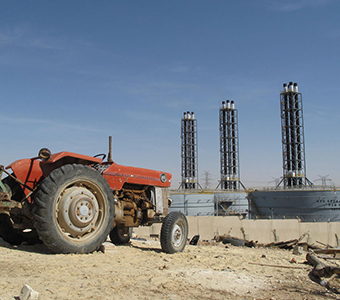 This article was originally published on Mada Masr and has been reproduced here with kind permission.

Three years after the first investments arrived in Egypt, Jordan, Tunisia and Morocco from the European Bank for Reconstruction and Development (EBRD), the London lender announced a quarter of a billion dollar program to support new renewable energy projects across the region.

Although the bank says it “wants to push renewables to the next level,” new research shows there is not often the money to back this up.

The EBRD has established itself as one of the leading multilateral lenders for the energy sector in the region it refers to as the southern and eastern mediterranean (SEMED). Established in 1991, with a dual mandate to finance economic transition and sustainable development in Eastern Europe and the former Soviet Union, the bank was given a similar task by its government shareholders after the popular uprisings that swept the Arab region in 2011.

Of the 1.5 billion euros invested in SEMED by the EBRD between 2012 and 2014, the energy sector accounted for about 40 percent of the total, or 604 million euros. Energy investments were particularly important to Egypt and Jordan, where they made up 37 and 72 percent of total EBRD financing respectively.

But a closer look at the projects that the bank has financed in the energy sector reveals that, despite the bank’s rhetoric about promoting sustainable energy, its balance sheet for 2012-2014 has fossil fuels all over it.

A matter of perspective

One illustration is the 156 million euros the EBRD lent to the state-owned Egyptian Electricity Holding Company. The project consists of the conversion of two existing power plants at Damietta West and El Shabab to combined cycle gas turbines, in order to increase their generation capacity. Bankwatch sees this as a project that will essentially use more fossil fuels, as opposed to the EBRD, which accounts for it an as efficiency gain.

Neither does Bankwatch believe that new, so-called “greenfield” electricity and heat power plants (co-generation plants) should be seen as energy efficiency projects. Depending on the energy source used, such projects are classified either as renewable energy or fossil fuels. Take for instance the Abdali District Heating and Cooling plant in Jordan, which the EBRD presents as an energy efficiency project, even though it is difficult to know exactly what fuel the new plant will use.

Similarly, the bank views any component in the construction of a new fossil fuel-fired power plant that provides energy savings as an energy efficiency project. Bankwatch believes that such a project should not be considered green, as it will lead to the increased use of fossil fuel. This is the case with the Manakher Power Project in Jordan.

The Manakher power plant, which burns a mix of gas, heavy oil and other fossil fuels, received 130 million euros from the EBRD, in spite of vocal concerns from local residents about the project’s impacts. While the EBRD has claimed that the project will ensure a secure electricity supply for Jordan, it may in fact have the opposite effect, since Jordan is dependent on gas imports from Egypt. In 2004, the two countries signed a 15-year agreement for the supply of gas, but bombings of the pipeline running through Sinai since 2011 and the shortages in Egyptian gas deliveries led the Jordanian government to increase gas prices. Last year Jordan’s state-owned power company also signed a 15-year deal for the purchase of natural gas from Israel, adding to concerns about the future security of energy supplies. 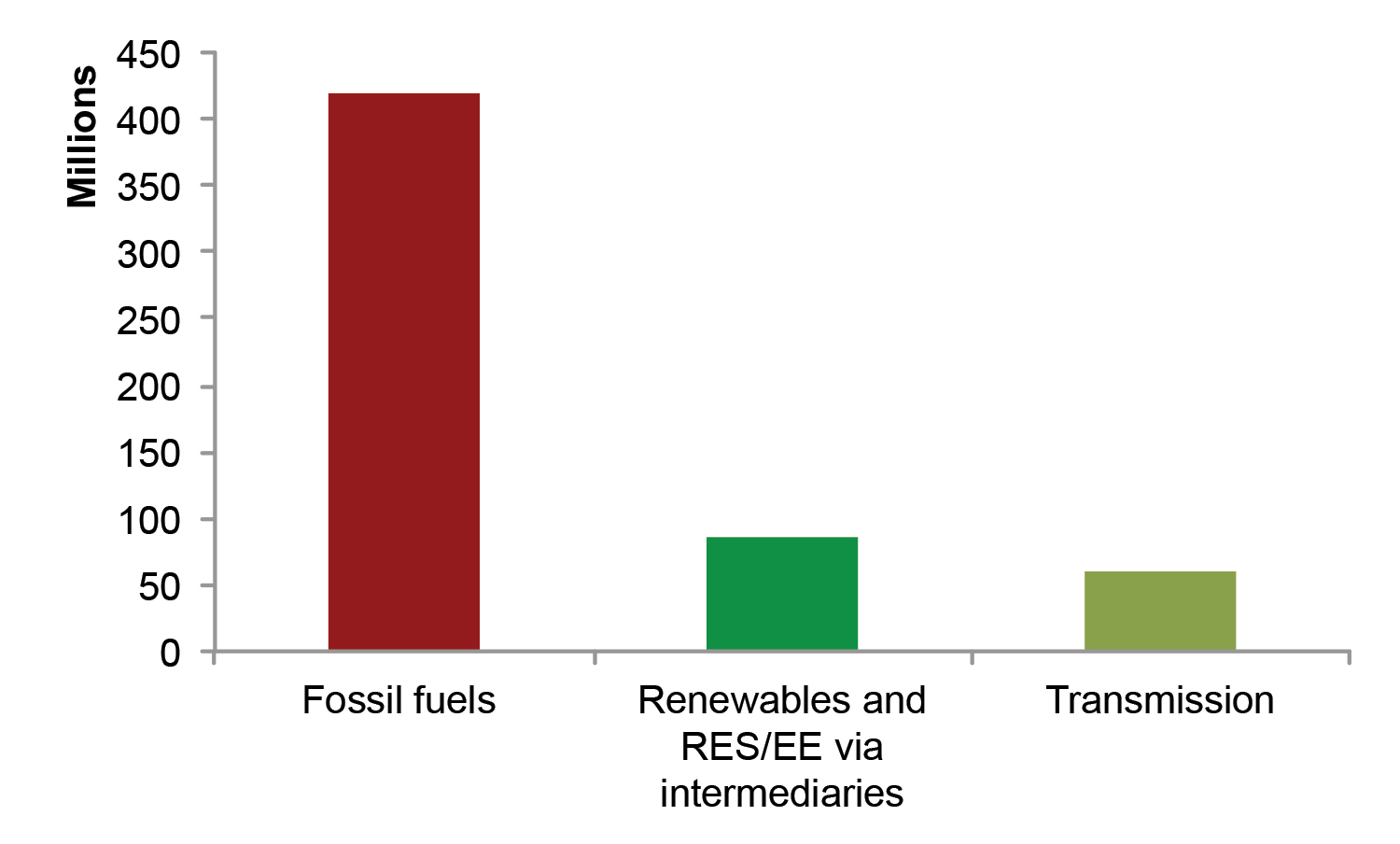 Stuck in the past

Research has indicated that, between 2012 and 2014, almost 70 percent of the bank’s financing in SEMED countries’ energy sectors (419 million euros) was spent on oil and gas-based electricity generation, as well as hydrocarbon extraction and distribution. By contrast, the bank’s support for renewables and energy efficiency totalled just 14 percent, or 85 million euros.

The difference in the amount of financing for fossil fuels and renewables is particularly striking in hydrocarbon-dependent Egypt. Egypt already ranks among the world’s fastest growing greenhouse gas emitters, and the EBRD’s 239 million euros for financing fossil fuels is likely to solidify this trend. Part of this public money was spent on offshore gas drilling. 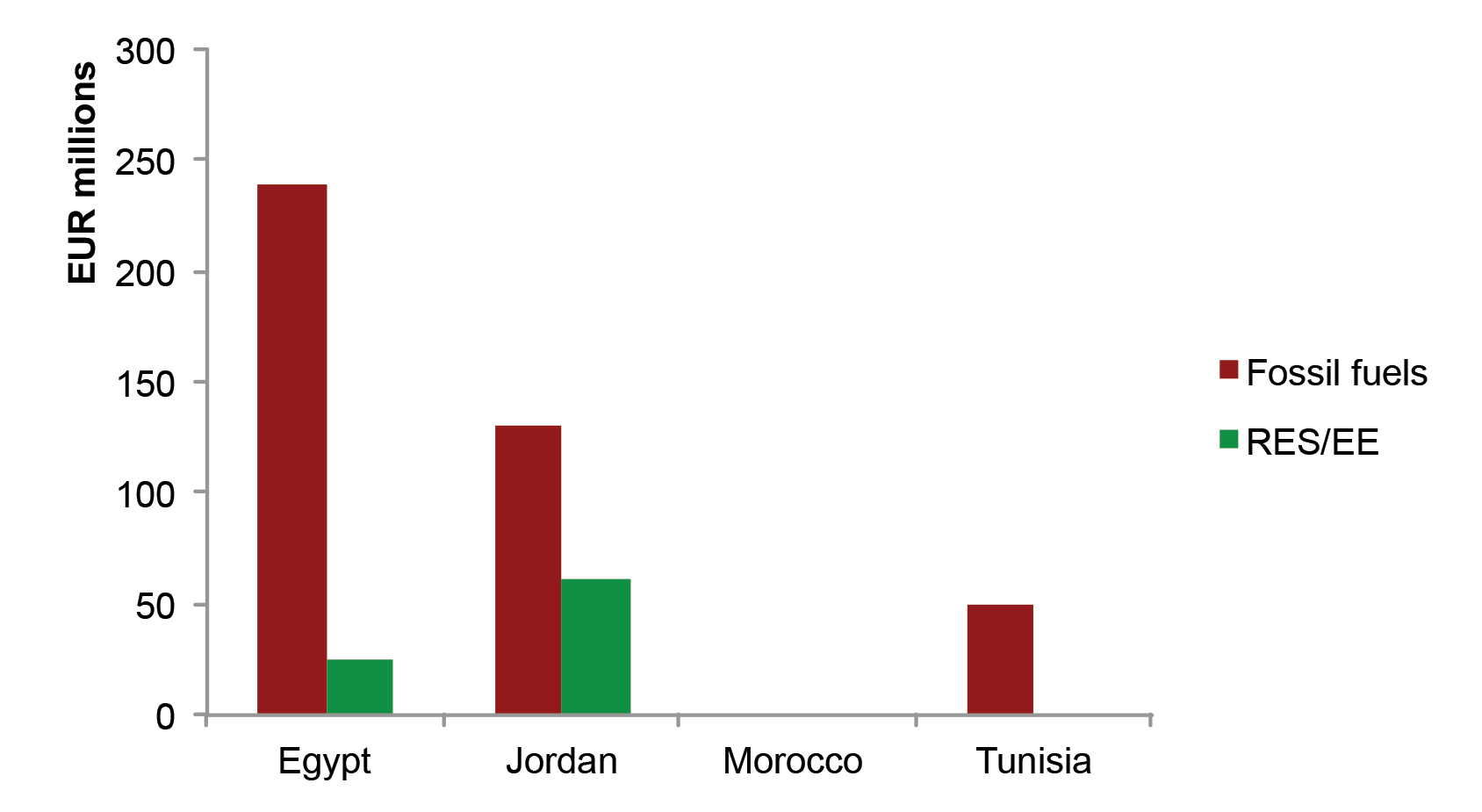 EBRD financing for renewables and energy efficiency versus fossil fuels by country, 2012-2014

At the same time, the EBRD did little to decrease the energy intensity of Egypt’s economy, which ranks among the highest in the world. Small renewable and energy efficiency projects in the country received a meagre 24 million euros. In Jordan, a country awash with solar and wind power potential, the bank lent just 61 million euros for four solar projects.

The bank has also failed to diversify its renewables portfolio and to penetrate all SEMED markets. Although the region is rich in wind, solar, geothermal (and to lesser extent hydropower) potential, the bank invested only in solar power (the projects mentioned above in Jordan). Neither Morocco nor Tunisia received EBRD investments for renewables or energy efficiency. 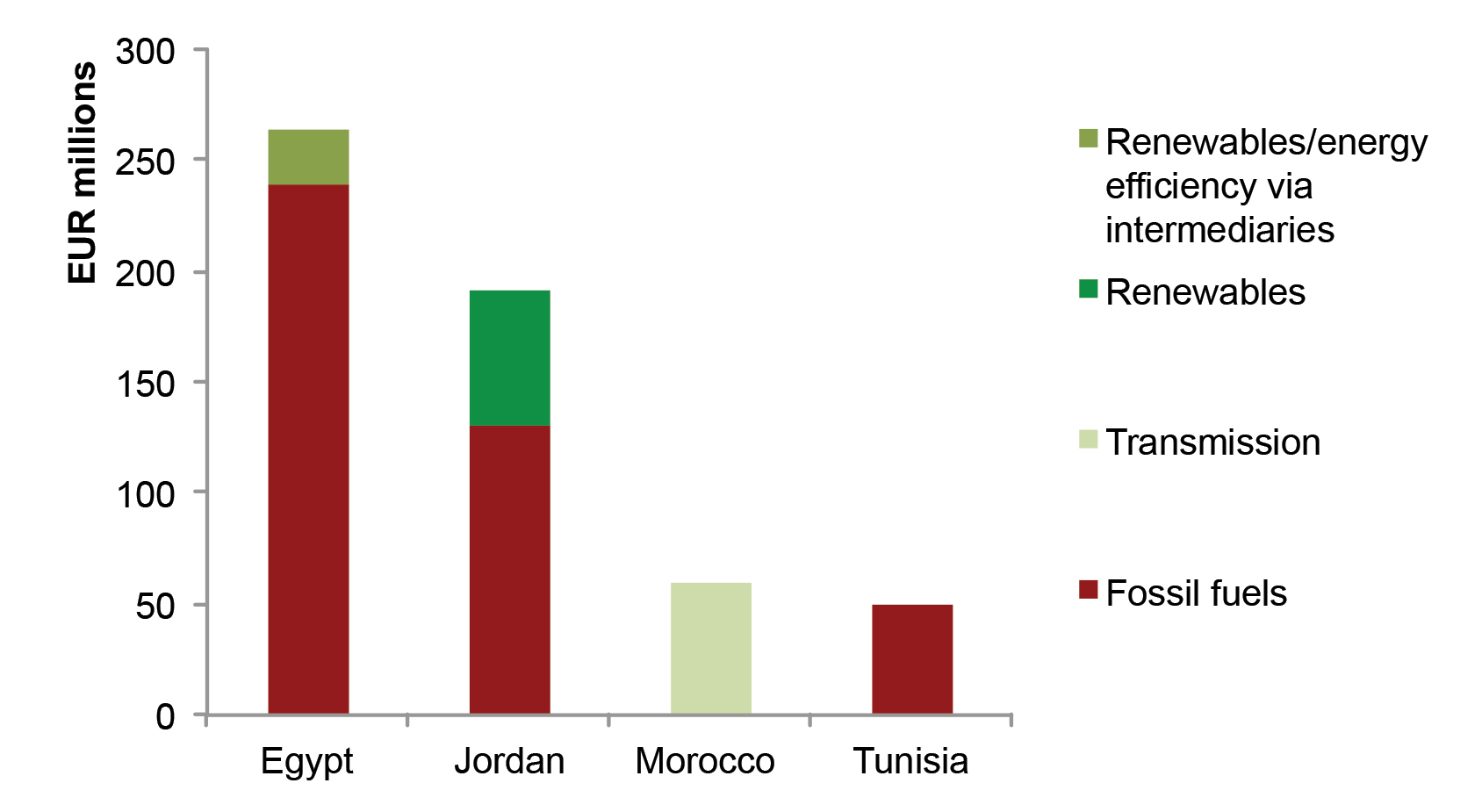 Political developments and legal barriers in the SEMED region are certainly a hindrance to the business climate that the EBRD operates in and complicates the bank’s sustainable energy initiatives. While there have been encouraging signals in 2015 that the EBRD is progressing in deploying renewable energy sources and energy efficiency in the region, EBRD lending for the energy sector over the last three years has not helped alleviate these countries’ historic dependence on fossil fuels. It remains unclear whether the bank’s recent announcement will become reality or mere rhetoric.