Home > Blog entry > The EIB in Greece: by the numbers

As Europe’s financial establishment braces for the results of tomorrow’s Greek elections and Eurozone officials dangle the carrot of a new European Investment Bank programme in front of Athens, we’ve prepared a snapshot of previous EIB loans in the country. [1] [2] [3] [4] (NB: any tricolour similarities are entirely coincidental.) 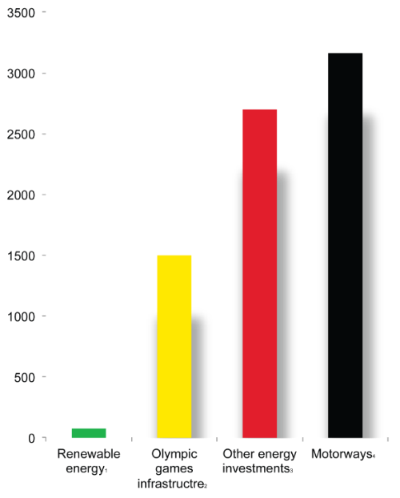 1. Since 2000 the EIB has financed only one project in the renewable energy sector, EUR 75 mln for windmill construction in 2003.

2. In 2002 and 2004 the EIB lent EUR 1,5 bln for the construction of Olympic Games infrastructure. This is the second largest individual loan for Greece, after EUR 2 bln in EU-funds cofinancing in 2010.

3. Energy investments between 2000 and 2011 totaled EUR 2.7 bln, for projects including gas power plants and pipelines, upgrades and the construction of electricity transmission networks and oil refineries.