Ahead of the European Investment Bank’s annual meeting, Counter Balance and Bankwatch have chosen an unconventional way to remind the EIB shareholders of the bank’s chequered track record. 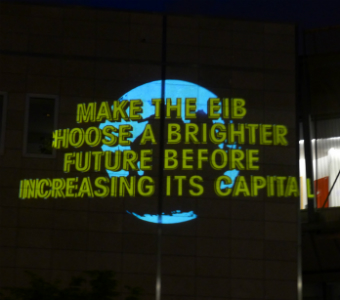 Europe’s political leaders are beginning to clutch at straws in the ongoing eurozone crisis. Facing an unreal choice between growth and austerity, a capital increase for the EIB has been put forward as an alternative to budget cuts and fiscal orthodoxy.

Since this suggestion is expected to be high on the agenda of the bank’s annual meeting today, Counter Balance and Bankwatch chose a public action to remind the EIB governors (mostly the Ministers of Finance of the member states) and other EU policy makers of the need to discuss first the quality of the EIB’s lending before increasing its quantity.

More concrete claims regarding the capital increase said that an additional EUR 10 billion for the EIB could trigger additional investments to the tune of EUR 180 billion – all for the sake of European economic growth.

Leaving aside the adventurous maths that was challenged also by the EIB’s president Werner Hoyer himself, the real question not only remains unanswered, but isn’t being asked resolutely enough: Is the EIB with its current performance actually able to lead the EU out of the current crisis and into an (economically, socially and environmentally) sustainable future?

Having monitored the bank for many years now, we have our doubts in Counter Balance and Bankwatch. Be it for example the EIB’s continued support for fossil fuel projects or it’s questionable lending through financial intermediaries, it’s a matter of quality, not quantity, to make the bank’s lending work for a sustainable Europe.

For more information, read the press release and a recent article in our quarterly newsletter Bankwatch Mail.