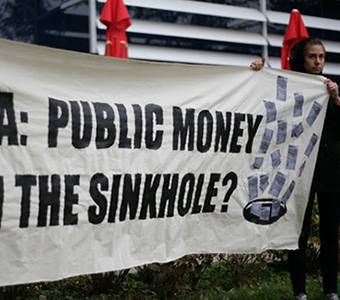 Yesterday, the project developer, state energy company HEP, announced that the main financier of the future dam, the European Bank for Reconstruction and Development (EBRD), pulled out. Although an official reason was not given, it is clear that it was because of the project’s serious impacts on biodiversity.

Ombla had attracted widespread criticism from civil society groups and experts due to its impacts on the Vilina Cave – Ombla Spring protected area, which is home to 68 identified cave species, of which as many as 14 species are endemic to this site alone.

Uncertainties about the technical and economic credentials added to the widespread criticism of the project, as did the chaotic project development procedure, including the use of an old 1999 Environmental Impact Assessment and public consultations taking place only as a cosmetic measure long after the legal permits had already been issued.

In November 2011, the EBRD approved a loan of EUR 123 million for the new plant (whose total costs are estimated to reach EUR 152.4 million) on the condition that a nature impact assessment was completed before disbursement. When this study came out in March this year, it showed that the project could harm many of the 68 identified cave species, including the endemic ones.

Together with our colleagues from Zelena akcija in Zagreb, we’ve been for more than a year and a half explaining to the EBRD that the project comes with too many environmental costs and too much uncertainty about its economical and even technical feasibility to be promoted by a public institution.

We are very heartened that the bank was brave enough to pull out of this ill-fated project. We also hope that the EBRD will have learnt something from this experience: as the EBRD revises its Energy Operations Policy and its Environmental and Social Policy (both these revision processes are ongoing at the moment), it must make sure to include in the new blueprints criteria that will ensure the true sustainability of hydropower projects the bank finances in the future as well as their full compatibility with EU legislation.

Update: In its response to the open civil society letter, received on June 4, the EBRD confirms its withdrawal from the project. Download the response as pdf.