Home > Blog entry > Will energy efficiency be sidelined in the Energy Union’s implementation?

EU energy ministers are meeting in Brussels today to discuss the implementation of the Energy Union. Looking at what has been discussed so far, the strategy may not prioritise energy efficiency enough to help Europe become climate-friendly. 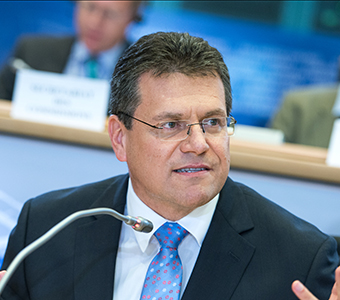 EU energy ministers are meeting in Brussels today to discuss the implementation of the Framework Strategy for the Energy Union, the EU’s five year energy strategy.

If the last six months provide any indication, then the Commission’s flagship framework for the energy sector is shaping up to be a large disappointment for those hoping it could help Europe make real strides towards decarbonisation, decentralisation, and the decrease of energy consumption in Europe.

Billions of euros are to be spent among others on the construction of mega gas pipelines, the so far commercially not viable carbon capture and storage technology, and on developing the still far from promising shale gas potential in Europe.

In the beginning of June I shared a panel with the European Commission’s Vice-President for Energy Union Maroš Šefčovič at a conference in Riga which he joined as part of his Energy Union tour through EU countries. In his public appearances, Šefčovič continues to stress that “the cheapest, safest and most secure energy is the one not consumed”. This sentence had appeared in a leaked draft strategy for the Energy Union, but disappeared from the final version.

Energy efficiency has deserved the important role it has as one of the five dimensions of the Energy Union. Especially central and eastern European countries could benefit greatly from an Energy Union that focuses on fully exploiting the energy savings potentials. This is true not only in the housing sector, but as well in the transport and industry sectors, where the energy intensity is still much higher than in old member states.

Let’s be clear, though, that the benefits of decarbonisation are not limited to central and eastern Europe alone. A study published in October 2014 by the World Resources Institute and Ecofys shows that more investment in renewables and energy efficiency in three sectors (housing, industry and power generation) can cut natural gas imports to the European Union by 50% and CO2 emissions by 49%.

Despite public reassurement of the importance of energy efficiency, decarbonisation and “remaining no.1 in renewables”, it is the energy security scare that yet again seems to be at the forefront of the EU’s plans. To secure supply, the European Commission and Member States seem only able to operationalise more fossil fuels projects instead of first working out solutions for reducing energy demand quickly.

The crown jewel in the plans so far is the Southern Gas Corridor, a system of mega-pipelines meant to bring gas to Europe from the Caspian region. Numerous arguments against the 35 billion euros project have been brought forward, for instance:

With that much focus on fossil fuels, Europe cannot hope to achieve a long-term decarbonisation, a decentralisation of energy supply and a decrease of energy demand in all sectors to meet its 2050 climate and energy goals. Other solutions are required for this.

Member states play no small role in watering down the more sustainable aspects of the Energy Union strategy. Already in September and October 2014 and again in February this year, the Visegrad + 2 countries (Poland, Hungary, the Czech Republic, Slovakia plus Romania and Bulgaria) have successfully pushed against influence from Brussels on their domestic – dirty – energy mix.

New member state’s spending priorities are also becoming clear with a look at their plans for EU funding until 2020. While the relative increase in energy efficiency funding is significant, it still remains on a low level in absolute terms. And in spite of scaled up opportunities for funding clean and sustainable energy infrastructure, countries are planning to spend only very little on renewables. Instead they have slated significant amounts for gas pipelines and road constructions.

For instance, Poland’s share of fossil fuel support constitutes up to 25% of all energy infrastructure funding. The Czech Republic and Slovakia spend more than 50% of their transport funding on roads.

To make the Energy Union anything more than business as usual, the focus and with it the funding has to shift away from fossil fuels and towards renewables, energy efficiency and decarbonisation.