The disproportionate impacts that the Nenskra hydropower project in Georgia will have on women are not being assessed by the project company, in spite of its financiers’ standards. 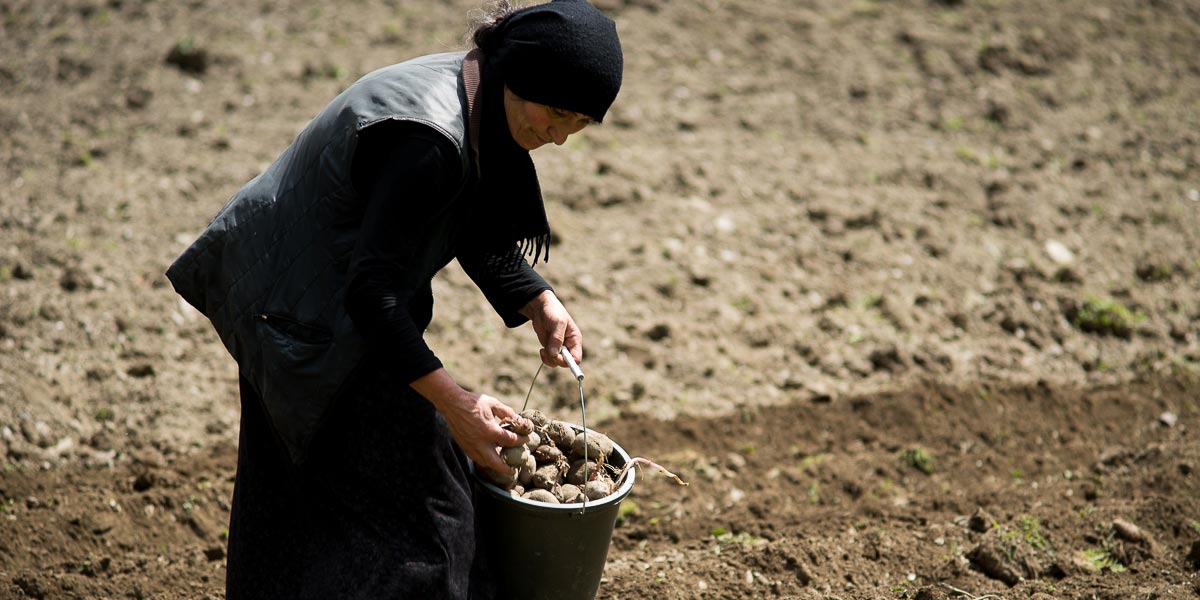 A woman working on a farm in Upper Svaneti, Georgia. Plans for the Nenskra hydropower plant are so far being made without properly assessing the potential impacts on women. (c) Rosa Vroom

One of the development phraseologies du jour is ‘sustainable and inclusive growth’, often used to mask the impacts of a pending piece of large infrastructure on socially-vulnerably groups. In the case of the Nenskra hydropower plant in Georgia’s Svaneti region, it has become a favourite trope for the public banks considering the project – the European Investment Bank, the European Bank for Reconstruction and Development, the Asian Infrastructure Investment Bank, the Korean Development Bank and SACE, the Italian export credit agency – to downplay the serious threats Nenskra poses, particularly on women.

The project will affect two small gorges in the villages of Chuberi and Nakra, which are home to roughly 1200 people. The environmental and social impact assessment concludes that only 80 households will be directly impacted by the dam – with no specific and disproportionate impacts regarding gender – and it boasts that all members of these communities will enjoy social programmes provided by the project sponsor.

The project sponsor, Korean K Water, has said that it would source employment for all of the unskilled and half of the skilled workers from the villages in and around Svaneti, in order to minimize an influx of employment migrants, like the expected 1100 workers needed for construction, most assuredly to be male.  As the World Commission on Dams warned, “large dam projects typically build on the imbalance in existing gender relations. For affected communities dams have widened gender disparities either by imposing a disproportionate share of social costs on women or through an inequitable allocation of the benefits generated”. Some of these wider impacts may include domestic violence and sexually transmitted diseases, and problems during land compensation when planning is poor and gender-blind. This is because gender and power imbalances lead to the further marginalization of women in traditional land ownership societies.

Women from Chuberi and Nakra shared their experiences with this sort of mistreatment. Said one woman doctor in Chuberi about consultation processes over the Nenskra project, “They don’t take into account anybody’s comments and proposals, and they could not answer concrete questions about the risks we face.” Another woman working as a teacher in Chuberi echoed these sentiments. “When I find out that there is a meeting planned, I always go there and often see bizarre situations. Often I film the meetings and meeting organizers and police try to stop me, claiming that filming a public meeting is illegal.” Women here also fear that in the future they may be forced to resettle, which would worsen the quality of life because of the risks posed to health and the potential for geological accidents. [1]

Their fears have precedent, as other hydropower projects in Georgia financed by the development banks have shown. In the Adjara mountains of the southwest, the Shuakhevi project jointly financed by the ADB and the EBRD was said to have no impacts on gender.

Yet the Adjara mountains are inhabited by primarily Muslim communities, whose religious beliefs and social and cultural specificities mean that project consultations affect genders differently. For example, during public hearings with three villages affected by the project, only men were present at the meetings (pdf), and not a single woman had been interviewed even separately. The project sponsor, Norwegian Clean Water, decided not to confront a local man who claimed that “woman cannot express their opinions freely”.

Increased traffic and blasting from the construction have also impacted the lives of women in more than ten communities in the region. They now must accompany children to and from school, and women are travelling further to retrieve water for household use, sometimes two to three kilometres more, as river and springs nearby have dried up. In addition, women whose spouses or relatives find jobs on construction now have a greater workload, since they then need to maintain the agricultural activities previously cared for by men.

The fights of women against the hydropower need more support from civil society groups working on gender issues. Issues like positive discrimination and quotas in parliament can be strengthened and support local battles for public participation in decision-making and increased involvement of women in politics.

1. According to the 2016 ESIA “Its impact on climate will be essential in spring, when the whole ice cover will start melting-breaking and in the late autumn, before the ice events will start. The significant difference between water and air temperature in these periods and strong wind will activate evaporation. Evaporated moisture in form of snow-ice will lie on buildings, fruit trees and will damage them. The damage caused by early freezes is heavier, because the freezes cause the death of buds and sprouts, due to which the useful plants start premature aging, infertility and death. The population living in the vicinity of the reservoir will get a heavy living conditions, who are sick with rheumatism or/and respiratory and require vascular system treatment.”