I had a strong sense of deja-vu today. On 31 March 2008, residents of the Zagreb suburb of Resnik held a protest against plans for a 385 000 tonnes per year waste incinerator which was to be built nearby. It was a sunny day and the majority of Resnik’s residents came along to show their opposition to yet another industrial facility being built in their neighbourhood and to push for a waste management system built on waste prevention and recycling. 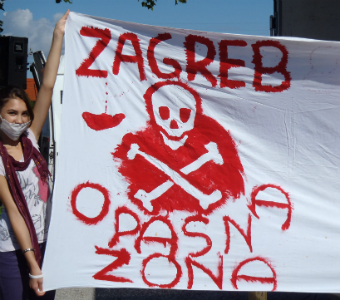 I had a strong sense of deja-vu today. On 31 March 2008, residents of the Zagreb suburb of Resnik held a protest against plans for a 385 000 tonnes per year waste incinerator which was to be built nearby. It was a sunny day and the majority of Resnik’s residents came along to show their opposition to yet another industrial facility being built in their neighbourhood and to push for a waste management system built on waste prevention and recycling.

Later in the year, the City Council confirmed that the incinerator project would not go ahead, and it seemed that the space had finally been created to allow a sustainable waste management system to be put in place in Zagreb.

Yet six-and-a-half years later, on 21 September 2014, here we were again. Again in Resnik, again against the planned incinerator and in favour of recycling, again on a sunny day, and again with the majority of residents present.

There were some differences however. People are even more angry now. Even Resnik’s priest had some harsh words for the Mayor this time. 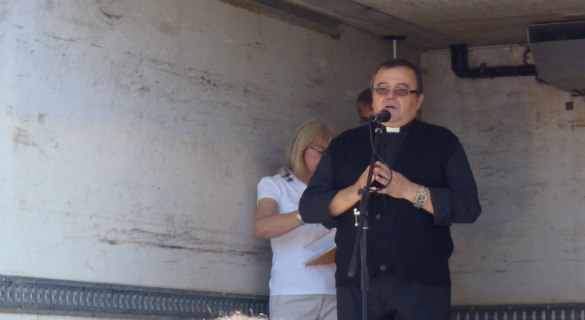 And there is much wider interest in Zagreb’s waste problem than there was then – still not enough, but more experts and civil initiatives are coming together to put pressure on the city authorities. 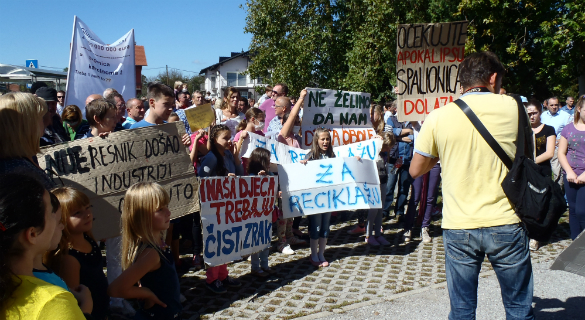 This Thursday, Zagreb City Assembly will vote on a ‘new’ waste management plan for the city, which again contains an incinerator as one of its main components and fails miserably to finally implement a door-to-door recycling system or serious waste prevention measures.

So how come that in six-and-a-half years the City of Zagreb hasn’t managed to implement a sustainable waste management system and has instead gone back to the incinerator plan that it already admitted once it could not implement?

It is not due to lack of alternatives. For years already NGOs and civil initiatives like our Croatian member group Zelena akcija/Friends of the Earth Croatia have promoted a system based on prevention, recycling and composting, and mechanical-biological treatment, with landfill needed for only a small amount of stabilised waste left at the end of the process. Many cities all over the world are implementing such systems.

But it might be due to selective hearing. The fact that ostensibly ‘green’ countries like Denmark, Germany and Austria all use incinerators to some extent is seen as proof that they must be fine. There can be few people in Zagreb who haven’t heard the tiresome tale about Vienna’s legendary Spittalau incinerator in the middle of the city, as if it is inconceivable that something built in 1971 in Vienna – and re-built in 1987 after a major fire – might not be the optimal solution for Zagreb in 2014. Indeed Vienna’s recycling and composting rate, while head and shoulders above Zagreb’s at around 50 percent, is the lowest in Austria – is further progress being hampered by needing to fill the city’s incineration capacity?

Other countries too are finding that their progress in recycling and composting may be hampered by having too many incinerators. Germany, Sweden, Denmark and the Netherlands already have more incinerator capacity than residual waste (pdf) and import waste to feed their hungry incinerators. The UK soon will have overcapacity as well if it constructs the incinerators it has granted permits for. Denmark in 2013 came out with a waste management plan that explicitly aims at decreasing incineration and increasing recycling, as it recycles so much waste that it may even have trouble meeting its EU 2020 recycling targets.

More positive aspects of waste management from Germany, Austria and other EU countries such as door-to-door collection of recyclables and organic waste, as well as the promotion of home composting, are not getting a look-in in Zagreb, never mind that the EU now has a target of 50 percent recycling of municipal waste by 2020, which Croatia is a very long way from meeting. The Zagreb plan’s only move for increasing recycling is to increase the number of containers on the streets and the number of recycling yards, in spite of the fact that this approach obviously hasn’t brought high levels of recycling in the past, nor has it done so in other countries.

Such stubborn blindness on the part of the Zagreb authorities on how to implement a functioning prevention, recycling and composting system is extremely frustrating. But Resnik’s residents have today shown that they are ready to continue their fight to defend themselves from the incinerator, and let us hope that their persistence will force a turnaround of city waste policy, and soon. In the meantime, any potential investors in the incinerator would be well advised to keep away.