Home > Press release > Revealed: the EU’s flagship energy project is built by companies with a legacy of corruption

Revealed: the EU’s flagship energy project is built by companies with a legacy of corruption

No less than 15 firms contracted to build the Trans Adriatic Pipeline (TAP) and the Trans Anatolian Pipeline (TANAP), the two main sections of the so-called Southern Gas Corridor, have been implicated in various forms of corruption in the past, according to a CEE Bankwatch Network report published today. 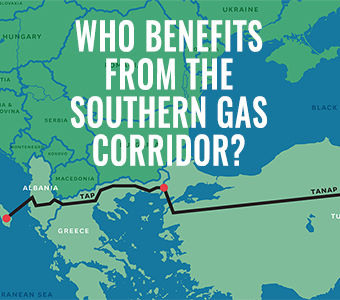 No less than 15 firms contracted to build the Trans Adriatic Pipeline (TAP) and the Trans Anatolian Pipeline (TANAP), the two main sections of the so-called Southern Gas Corridor, have been implicated in various forms of corruption in the past, according to a CEE Bankwatch Network report published today.

Note: This press release has been amended to correct several errors that have been idenfitied after publication.
Read a statement about those changes >>

The full report can be found here: https://bankwatch.org/risky-business

Using publicly available information on companies contracted to build the two main sections of the Southern Gas Corridor in Italy, Greece and Turkey, the report reveals how many of them have a worrying history of corruption. In several cases, construction companies and their executives have been convicted on different charges, or they are currently facing criminal investigation and prosecution.

Among the companies identified in the report are three Greek firms – Ellaktor (through its subsidiary Aktor), J&P Avax, and GEK Terna – that are considered by authorities in Greece to be part of a cartel which operated in the construction sector for nearly 30 years. Companies in this cartel are alleged to have taken turns winning large public tenders and then dividing them among themselves.

Aktor was contracted to build, together with French company Spiecapag, 215 kilometres of the pipeline, mostly in Greece, even though the Leonidas Bobolas, CEO of its mother company Ellaktor, has long been on the authorities’ radar.

In 2015, Bobolas, whose name appeared on the ‘Lagarde list’ of potential tax evaders, paid EUR 1.8 million in bail after he had been arrested in Greece on suspicion of money laundering and tax evasion. In May 2016 the Cypriot authorities issued a second European Arrest Warrant against him.

Siemens, who is to supply the TAP project with six gas turbine turbo compressor units, is also said to have taken part in the same cartel. The German firm has a history of corruption in Greece, primarily in connection with a major scandal that came to be known as “The black cash of Siemens,” in which it allegedly bribed state officials.

In Italy, three of the companies contracted by TAP for the construction of the pipeline, or their past subcontractors, have had affiliations with mafia groups in the past. One of them, Bonatti Group, was hired to build a 760 kilomteres section of the pipeline in Greece, while in Italy a company it had hired in the past has had its public contract suspended for its links to organised crime.

Turkey’s state owned energy firm Botas is the company responsible for the construction of the TANAP project, and all of the main subcontractors in the pipeline project have close ties to the ruling AK Party.

Botas has been implicated in at least two major corruption scandals, where bribery has played a central role in winning public tenders. Among those convicted in these two scandals were top executives in Botas and in some of its subcontractors for the TANAP project, as well as senior officials in the Ministry of Energy and Natural Resources which partly controls Botas. The Turkish Supreme Court later overturned the rulings, clearing most of the defendants, but much of the evidence remains in the public domain.

An interactive presentation of the contractors building the two pipeline projects can be found here: https://bankwatch.kumu.io/risky-business

Priced at USD 45 billion, this is the most ambitious energy project the EU is currently promoting, and four of the world’s largest public banks – including the European Investment Bank and the World Bank – are considering record loans for both TAP and TANAP.

The Southern Gas Corridor has been listed under the EU’s ‘Projects of Common Interest’ (PCI), a status that allows faster and simpler permitting procedures as well as privileged access to European public funding. Italian authorities are currently investigating former MEP Luca Volonté who is suspected to have received a EUR 2.4 million bribe from the Azerbaijani government – money that has allegedly helped secure the Southern Gas Corridor’s PCI listing.

“Channelling billions of euros in public funds to dodgy companies – all in the name of so-called energy security – is this the legacy Europe wants?” says Mark Fodor, Bankwatch’s Executive Director.

“Public lenders such as the European Investment Bank and the European Bank for Reconstruction and Development should seriously consider whether they are willing to entrust their largest ever loans to companies that have a history of bribery, tax evasion and mafia connections,” says Anna Roggenbuck, Bankwatch’s EIB Policy Officer.

For more on Bankwatch’s campaign on the Southern Gas Corridor see: https://bankwatch.org/our-work/projects/southern-gas-corridor-euro-caspian-mega-pipeline