Dust pollution in Tuzla, Bosnia and Herzegovina, has been twice the legal limit on two thirds of monitored days in 2018 and caused over one hundred premature deaths in adults during the year, according to independent new data published today in the report Lifting the Smog [1] by CEE Bankwatch Network, the Health and Environment Alliance – HEAL and the Center for Ecology and Energy in Bosnia and Herzegovina. 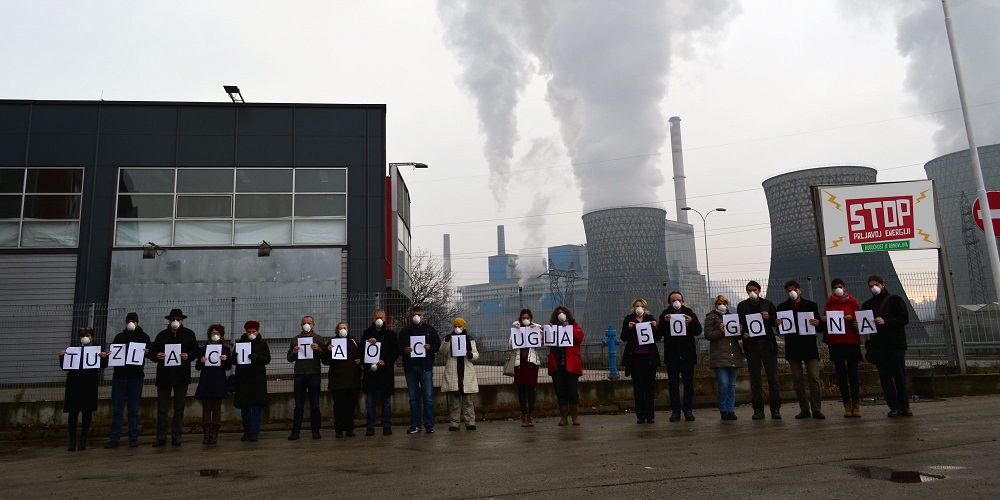 The measurements were taken in 2018 and showed that average levels of coarse particles known as PM10 were double the legal annual average limit for the five months of monitoring. PM10 average values were 78.9 µg/m3, while the legal average annual limit is 40 µg/m3. On three out of the five months of monitoring (98 out of 144 days), the daily limit was breached, even though national legislation allows the limit to be exceeded only for a maximum of 35 days per year.

Independent monitoring had to fill a gap, as there are no official measurements of PM10 in Tuzla, only of fine particles known as PM2.5, although the country has set a legal limit of PM10 pollution.

“People in Tuzla have already been protesting against air pollution, feeling that their city is one of the most polluted in the world. The data we publish today shows just how serious the problem is and how authorities in Bosnia and Herzegovina, who are failing to even do proper monitoring of smog levels, are directly responsible for hundreds of deaths and thousands of cases of illness,” says Denis Zisko from the Center for Energy and Ecology.

Modelling of health impacts shows that officially measured PM2.5 pollution caused 136 premature deaths in adults in Tuzla in 2018. This represents 17 percent of all deaths in adults older than 30. If pollution levels stayed within legal limits, air pollution would still be responsible for 63 deaths in Tuzla’s adult population, whereas adhering to the World Health Organization (WHO) recommendations would avoid each and every one of these deaths.

But instead of focusing on meaningful reduction of air pollution in Tuzla, the government is currently planning to add a new 450 MW coal-fired unit to the local lignite power plant (built in the 1960s and 1970s), which is already a major source of pollution in Tuzla, with its adjacent open-cast mines and ash disposal site.

The new unit is subject to controversy, among others because it is not designed in line with the latest EU pollution control standards known as the LCP BREF.

“One of the most shocking aspects is that authorities are presenting the construction of a new coal unit in Tuzla as part of the solution. But the new coal unit would add to the total installed  capacity at the existing plant and come with another polluting ash pond, which would only increase air pollution when dry. People in Tuzla must not fall for such a lie,” said Ioana Ciuta from CEE Bankwatch Network.

Instead, the ‘Lifting the Smog’ report makes concrete recommendations to protect the health of Tuzlan citizens.

“The Tuzla air pollution crisis needs an immediate response from decision-makers. What is needed is a plan how to phase out the Tuzla coal plant with interim measures to reduce coal pollution, but also upgrading the air monitoring network to identify the true magnitude of the health impacts. The health sector has a unique role to play in informing the public on the extent of Tuzla’s air quality problem and guiding the much needed changes,” says Vlatka Matkovic Puljic from HEAL.