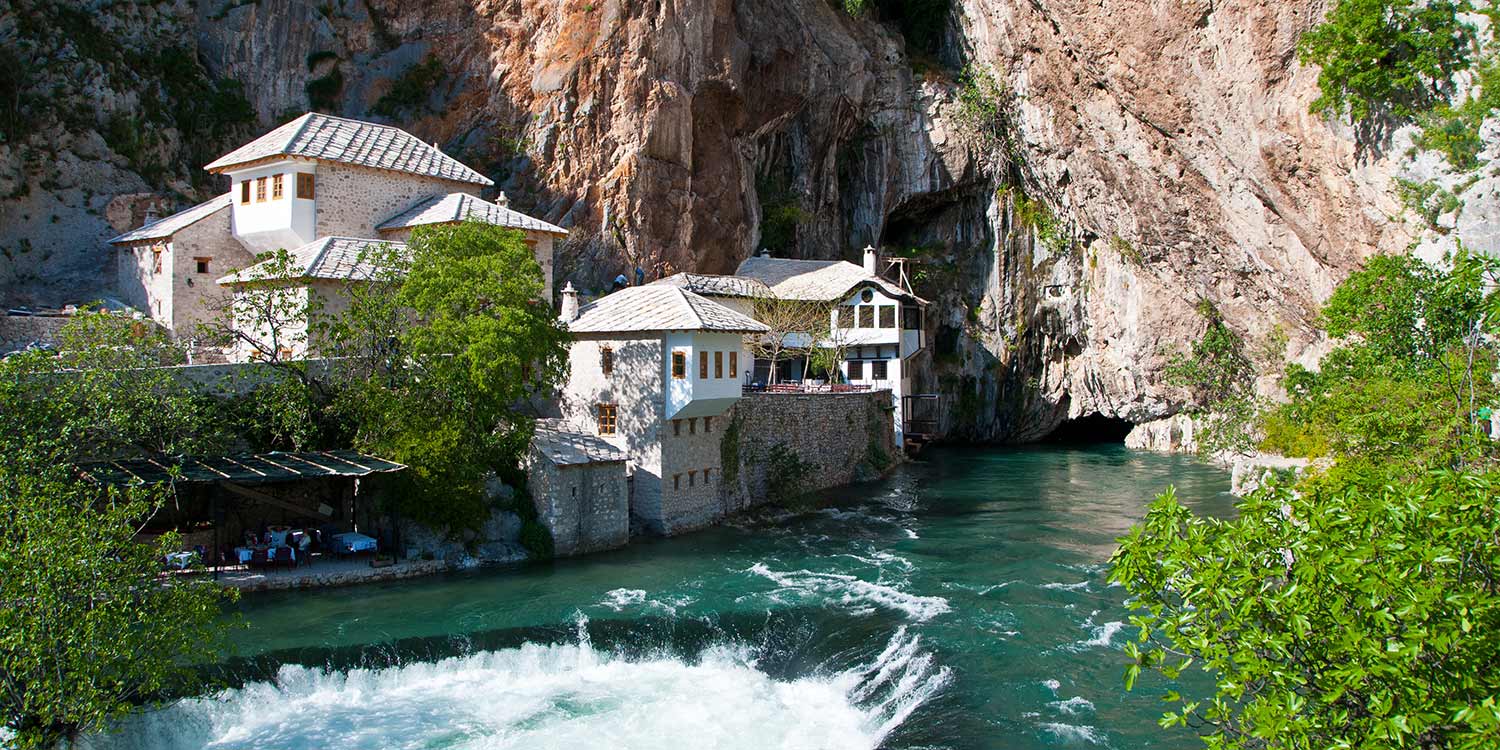 The source of the river Buna in Blagaj. (Image by flickr user Smooth_O

The Bosnian Corridor Vc route falls mostly within the Federation of Bosnia and Herzegovina Entity, with only a short section in Republika Srpska. Both the EBRD and the EIB are financing sections of the project.

Some adjustments were made to the route after the Environmental Impact Assessment was carried out, however there are still some unresolved issues.

One section to the south west of Sarajevo goes through the planned Prenj-Cvrsnica-Cabulja National Park. Much of the route would involve tunnels and viaducts, no matter which variant is used, thus also making it the most costly section.

Blagaj, near Mostar, is on UNESCO’s tentative World Heritage Site list for its Ottoman-era religious and secular architecture. It also hosts the source of the River Buna, which flows from a cave at the foot of a cliff.

The Vc route is supposed to cross a large agricultural valley near Blagaj, however, many local people do not accept this routing as they state that this would result in the destruction of valuable arable land and the formation of a barrier in the middle of a valley.

In Herzegovina arable land is scarce, with a great deal of the countryside formed of harsh karst areas. Local NGOs propose that instead of going across the valley, the motorway should run along the karst plateau above Blagaj.

Pocitelj, south of Mostar, is also on UNESCO’s tentative World Heritage Site list for its variety of Ottoman-era architecture. For many years it has also hosted an art colony. A bridge was planned near Pocitelj, which is not in the protected zone but concerns exist about its visual impacts on the old town, and a second route to the north of the town has been proposed.

After concerns were raised about these impacts by local people and cultural figures, draft proposals for including changes to the route at Blagaj and Pocitelj were approved by the Federal Government on 27.08.2009. This sparked a crisis in the government of the Federation of BiH, and a series of scandals, which resulted in a deadlock in the working group for the development of the motorway. So far no final decision has been taken on the final routing.

In 2008 the European Bank for Reconstruction and Development signed a loan for EUR 180 million for the following sections:

The European Investment Bank is co-financing the Kakanj-Drivusa section with a loan of EUR 75 million (approved December 2008) and is also considering financing the three other sections that the EBRD is financing.

In August 2009 when the Federal Government approved the new route proposals at Blagaj and Pocitelj, Croat Ministers Vjekoslav Bevanda (Vice Premier and Minister of Finance), Felix Vidovic (Justice) Nevenko Herceg (Environment and Tourism) and Damir Ljubic (Agriculture, Water Management and Forestry) announced that they would not participate in the work of the Federal Government until further notice.

This was followed by various media scandals in which Dragan Vrankic, the State Minister of Finance, was accused of land speculation by buying a cheap piece of land on the originally planned route, above the petrol station at Trebizat near Capljina, which would then later be sold at a much higher price for the motorway and it was also alleged in the media that the Capljina District Council had also last year taken a decision in which 80 parcels of public land were divided between various people in the Croat HDZ 1990 party.

On 09.09.2009 Federal Minister for Spatial Planning Salko Obhodjas offered his resignation, reportedly because he did not want to participate in something which would harm the protected cultural heritage sites at Pocitelj and Blagaj. His resignation was accepted a few days later, after an appearance on the TV show 60 Minutes in which he accused the Federal Minister of Finance Vjekoslav Bevanda of trying to bribe him to accept the originally planned route of the motorway.

On 23-25 February 2010 Bankwatchs Balkan and EBRD Co-ordinators together with colleagues from the Banja Luka-based Center for Environment and Sarajevo-based Ekotim undertook a third visit regarding the Corridor Vc motorway in Bosnia and Herzegovina.

This report details the findings from our second fact-finding mission on the Corridor Vc motorway in Bosnia and Herzegovina, carried out in September 2009. Since the last mission in March proposals for changes in the route have been approved by the government of the Federation of Bosnia-Herzegovina, which would avoid the problems at the tentative UNESCO World Heritage Sites Blagaj and Pocitelj.