New analysis from CEE Bankwatch Network of how the EBRD conducts its financing and economic advisory activities finds serious deficiencies in the bank’s overall ‘market-oriented’ approach and catalogues a range of startling EBRD interventions in central and eastern Europe (CEE) and further afield that should prompt deeper examination of the bank’s promotional mantra “We invest in changing lives”.

If the EBRD claims to be ‘fit for purpose’, then Bankwatch believes there is substantial evidence available to urgently ask: for what purpose, and for whose purposes?

Published just after the tenth anniversary of EU accession for ten CEE states and ahead of this autumn’s twenty-fifth anniversary of the fall of the Berlin Wall, ‘Stuck in the Market?’ (pdf) is an update to Bankwatch’s 2011 report ‘Are we nearly there yet? Dilemmas of transition after 20 years of the EBRD’s operations’. And the recommendations of that report are more relevant than ever, chiefly: 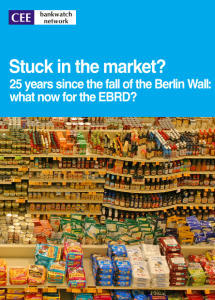 Harsh, embedded economic realities such as widespread, high unemployment across CEE, as well as the discernible trend of democratic retrenchment in several EBRD recipient countries, are resulting in very mixed feelings about the transition process in this year of important anniversaries.

The ‘resilience’ of eastern Europeans, much remarked on – or relied on, some would say – by western economists, commentators and financiers, in coping with the often dramatic effects of the financial crisis is no longer a given. Social unrest has been mounting in recent times, as seen in Bulgaria, Romania, Bosnia and Herzegovina, and of course at the Ukrainian Maidan.

“However,” remarks Pippa Gallop, Bankwatch’s Research coordinator and author of the new report, “the EBRD’s operations seem to be proceeding largely unchanged: promote the private sector and hope that everything else will follow. The bank is firmly ‘stuck in the market’, seeing it as the solution for everything and lacking the necessary caution to recognise that ‘promoting the private sector’ without adequate public participation and safeguards against corruption and human rights abuses is likely to be counterproductive.”

‘Stuck in the market?’ provides a wealth of evidence that illustrates how EBRD logic and action is too often working against the interests of people – though not certain people – and the environment.

A host of other egregious EBRD projects and questionable beneficiaries, as well as critique of the EBRD’s make-it-up-as-you-go-along approach to changing people’s lives across eastern Europe and in new recipient countries such as Egypt, can be found in the new report. Read it at: https://bankwatch.org/EBRD-stuck-in-market