The European Investment Bank (EIB), the EU’s bank and also the biggest public financial institution in the world by lending volume, has launched a public consultation on its energy policy and is seeking views from the public and other stakeholders that should feed into a review of one of the EIB’s most crucial lending sectors. The new policy is expected to take effect from June 2013.

The EIB’s energy policy review is taking place just as a string of major international agencies – including the United Nations, the World Bank and the European Environment Agency – have issued dire warnings about runaway climate change and the urgent need for major new investments into energy efficiency measures and clean renewable energy technologies.

This time last year, Bankwatch’s study ‘Carbon Rising’ revealed how EIB energy lending in recent years has failed to relate to long term EU climate protection objectives such as de-carbonisation of the energy sector by 2050 – and this from a bank intended to support EU policy objectives. 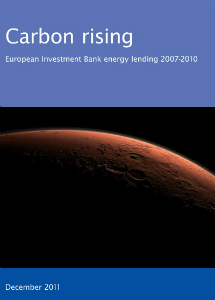 For example, as the Carbon Rising study showed, between 2007 and 2010 fossil fuels came out as the top beneficiary in the EIB’s energy sector lending, resulting in a high carbon ‘lock-in’ effect – such EIB investments notably involved the financing of coal-fired power plants, whether in Bielsko Biała in southern Poland or at the Sostanj coal power plant in Slovenia, as well as several other similar EIB loan deals.

In 2011 (see graph below), according to the latest Bankwatch research, EIB lending to the fossil fuels industry in the EU has decreased on average to one fifth of its overall energy lending, though it is uncertain whether this is a blip or if EIB fossil fuel lending will continue to trend downwards. Worryingly though, in 2011 EIB fossil fuel lending in the EU’s new member states of central and eastern Europe is still over 34 percent of the bank’s energy lending for the region.

As an EU institution, in theory bound by EU policies and strategies, the EIB needs clear political guidelines to set the direction for its future energy sector lending and the types of projects it supports. This kind of clarity is long overdue, due to the fact that when it comes to energy, the EIB has been operating to date within the framework of the EU’s own energy policy that is based on three pillars: sustainability, security of supply and competitiveness. 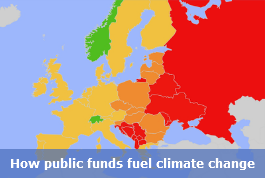 Alas, trying to strike a balance between these pillars has led the EIB to support projects like Sostanj in Slovenia and a number of other coal power plants that will lock in assets, as well as the countries themselves, into the dirtiest sources of energy for decades to come.

At the same time, though, the EIB has introduced its Climate Action program in an effort to mainstream climate considerations into its lending.

What is now at stake in the EIB energy policy review is whether instead of trying to satisfy competing demands, the EIB’s mandate should be better clarified and focused to make the bank a lead institution promoting the de-carbonisation of the energy sector and of our societies in general.

“A new approach from the EIB is needed to ensure that its investments are in fact adding value to the sustainable development of the EU. In order to increase benefits for the EU as a whole, the EIB should be strongly prioritizing projects that meet the requirements of all the three energy pillars, such as projects in demand side energy efficiency and renewable energy sources. These help to reduce the EU’s dependency on imported hydrocarbons, contribute to sustainability and are fully cost competitive, especially when we factor in social and environmental externalities.”

Grim climate scenarios on the rise

The International Energy Agency (IEA), in its World Energy Outlook 2011, recommended that any investments after 2017 in any sector producing GHGs – whether in transport, energy, manufacturing etc – should be aimed at zero-carbon utilities, otherwise the below two degree Celsius trajectory is seriously in doubt. With the growing pile of respected climate literature stacking up and pointing in one direction (principally, remove all fossil fuel subsidies, and concentrate on energy efficiency and renewables), the EIB needs to look much more critically at planned fossil fuel refurbishment and replacement projects, such as are now being lined up in many countries in central and eastern Europe.

The blunt question for the EIB is: are multiple retrofits of ageing coal fired power plants, for example, compatible with 50-70 percent global GHG reductions by 2050, not to mention 80-95 percent GHG reductions in the EU? The EIB also needs to tighten up its project selection criteria, to ensure that its investments provide real added value rather than simply going ahead with finance for projects that may bring power plants into compliance with current legislation but that will more widely frustrate efforts to make the transition to an energy efficient, new renewables-based economy. On this criteria, the EIB should not finance replacements or refurbishments of coal-fired power plants after 2013 or of gas-fired plants after 2014.

If these are required in order for a plant to be competitive with other energy sources, it should be a concern of the plant owners but not an EIB focus. Kuba Gogolewski, Bankwatch’s energy campaigner in Poland, explains further:

“While we understand that energy security is a concern, it is possible to reconcile these needs with climate protection through the financing of climate-friendly technologies. The development of renewable energy technologies and the potential for energy and resources savings presents enormous investment potentials, coupled with the possibility of creating millions of jobs across Europe. The EIB must now seize this opportunity.”

Job creation is of course particularly strong when it comes to demand side energy efficiency. Within the construction sector, energy efficiency measures in buildings are champions in terms of job creation. A respected 2010 study from the Central European University, that examined the employment impacts of a large-scale deep building energy retrofit programme in Hungary, found that:

Such impressive figures can apply too in other countries – but investment is now needed.

This is a clear message taken up recently by the IEA in its World Energy Outlook 2012. While recognising the fact that policy makers looking for simultaneous progress towards energy security, economic and environmental objectives “are facing increasingly complex – and sometimes contradictory – choices”, the IEA also notes that even with existing policies in place like the EU’s 2020 objectives, a significant share of the potential to improve energy efficiency still remains untapped.

‘Win-win-win’ for Europe – surely a no-brainer?

The EIB’s energy policy review is clearly upon us now at a crunch time in the European and global energy debate. Bankwatch will contend that the EIB has the opportunity to become a leader – even a champion – in the global arena by focusing its future energy investments in projects and programs that bring ‘win-win-win’ solutions for the EU in terms of economic, social and climate benefits.

EIB lending for renewable energy and energy efficiency projects has in recent years increased from 40 percent in 2010 to 47 per cent of total energy lending in 2011, reflecting the strong growth and development of these markets and the priority being given to these sectors during this period.

Yet the EIB cannot afford to rest on its laurels, and continue to be distracted by fossil fuel investments in their various guises. The bank must play a key role in catalysing the increased investment needed for Europe’s low carbon economy and for ensuring that the EU sharply improves its response to the climate change challenge. We therefore challenge the EIB to do more.

The ‘Carbon Rising’ report is available at:
https://bankwatch.org/publications/carbon-rising-european-investment-bank-energylending-2007-2010