Home > Publications > Georgia’s hydropower revolution far from rosy for communities, the environment and the economy

Georgia’s hydropower revolution far from rosy for communities, the environment and the economy

For Shuakhevi as with other large dams recently built or planned in Georgia, it all adds up for western planners and financiers. The final bill for the Georgian population and environment, though, is still a long way from being finalised.

The latest chapter in Georgia’s hydro power revolution was concluded recently with the securing of a financing deal for the 185 MW Shuakhevi hydro power plant (HPP) involving a trio of international development banks – the European Bank for Reconstruction and Development, the Asian Development Bank and two World Bank arms, the International Finance Corporation and the Multilateral Investment Guarantee Agency. This USD 250 million funding package seeks to release Georgia’s untapped hydropower potential and is one in a series of international investments that have been pitched as vital contributions to Georgia’s national energy security and economic development.

Yet, as with other large dams recently built or planned in Georgia, the electricity generated at the Shuakhevi HPP will mainly be exported. As such, it will ultimately strengthen the EU’s own energy security rather than deliver significant socio-economic benefits and energy independence for Georgia.

An Al Jazeera report on Georgian hydropower constructions in areas prone to landslides.

At a glance – how the floodgates are being opened in Georgia

Hydropower is booming in Georgia. As of 2015, and according to the Ministry of Energy, 16 HPPs are under construction, 14 are in the pre-construction phase, 52 projects are under negotiation while construction on 7 HPPs has already been finalised, including the EBRD funded Paravani HPP.

The capacity of the projects ranges from small HPPs to large scale developments such as the controversial 702 MW Khudoni HPP on the River Enguri in north-west Georgia. Total costs are estimated at nearly USD 4 billion, and many of these projects are receiving financing and technical assistance from international development banks – whether these institutions are fulfilling their mandate to promote sustainable, good governance and corporate performance is one issue that hangs heavily over the recent spate of new Georgian HPPs.

In order to encourage the development of hydropower, Georgia has pursued deregulation of its power sector and streamlined requirements for foreign investors. As with other large HPPs, the Shuakhevi HPP project agreements ensures that the Georgian government purchases electricity for domestic consumption over the three winter months. In the remaining months, the investor – in the case of Shuakhevi a domestic and international consortium including India’s Tata Power – is free to sell the electricity in markets and at a price of its choice. Thus, during the spring and autumn high water seasons, the electricity resources generated by the large dams will be exported to neighbouring countries such as Turkey.

The dry winter months, of course, have low water flow and the electricity generated for the local market is unlikely to significantly improve Georgia’s electricity balance. Due to low hydropower output in winter, therefore, Georgia will rely further on thermal generation and fuel imports. Moreover, under the new state-enforced guidelines, so-called ‘off-take agreements’ are valid only for 10 years, after which time investors may opt to export exclusively, leaving Georgia to cope with the challenge of satisfying domestic demand once again.

Perhaps of most concern, according to some Georgian energy analysts, is that in this expected scenario the country will be compelled to purchase electricity from Turkey, at Turkish prices, some of the highest in Europe, thus hitting Georgia’s private and business consumers alike.

These are not the only economic downsides being stored up, in spite of the Georgian government and foreign investors touting that the new HPPs will bring economic benefits for the country. Indeed, the enticements that have accompanied these dam developments include that the electricity exports will provide important revenues for Georgia and that the projects will provide employment opportunities and taxation revenues for local regional authorities.

However, these views are generally based on financial viability analyses that assess the profitability of projects from the investor’s perspective. For most of the projects a social cost-benefit analysis, that would try to determine a given project’s public economic contribution, is never carried out.

Thus the public has been told that hydropower-generated electricity exports will improve the national trade balance, yet the reality is that they will not generate fiscal benefits for the country as exports enjoy a zero percent rate of taxation. Equally, alternative, unofficial assessments deem the community benefits of all HPPs – including the Shuakhevi HPP – as being inflated, pointing to exaggerated projections for local budget contributions and employment figures.

With confident promises of secure employment for up to 800 workers and possibly recruiting the majority of workers from local villages, the promotional spiel of the Shuakhevi HPP promoters offers a case in point. Unfortunately the reality is that, with employment opportunities spanning over the course of construction works, most workers will be hired for the peak phase of the construction and installation and will therefore receive only temporary contracts. In September 2014, one year on from the commencement of the Shuakhevi construction, 293 Georgians had been employed by the main contractor. Of these, 239 people were residents of local villages. This is less than half the estimated number of locally employed workers.

The company has opened a training facility in Shuakhevi and trained around 600 people from site-affected families; 166 trainees were employed by the company. While the training has provided people with qualifications, when construction ends employment opportunities in the area are expected to be minimal, and layoffs will have big impacts on household incomes should workers be unable to find alternative employment.

Weak environmental regulations will bring a deluge of impacts

Compounding matters, and bearing in mind the staggering number of HPPs currently being developed or planned, it is also striking that the Georgian government has no strategic framework to oversee its ballooning hydropower sector. Instead, it reviews projects in an isolated, case-by-case basis, failing to properly assess the overall environmental, social and economic benefits and costs.

As it seeks to maximise its hydropower potential, the government is also prone to planning several dams for the same river basin. The Shuakhevi HPP concession was awarded together with the 6 MW Skhalta HPP, the 150 MW Koromkheti HPP and the 65 MW Khertvisi HPP, altogether comprising the 400 MW Adjaristsqali cascade hydropower project. This cascade will require as much as 34 kilometres of tunneling in order to divert water. Although a Ministry of Environment rule of thumb maintains that 10 percent of the annual water flow needs to stay in the riverbed, environmentalists insist that this minimum flow is not sufficient for maintaining river habitats. When combined, the various HPPs that make up the Adjaristsqali cascade will worsen the environmental impacts on water resources and associated ecosystems. The Khertvisi scheme has now been cancelled due to foreseen environmental risks and impacts on the Machakhela National Park.

The clear problem is that while cumulative impacts are noted in passing in individual environmental impact assessment studies, no combined impacts of these projects has been assessed as part of a broader national hydropower policy.

Moreover, the outsourcing of the state’s responsibilities to private sector project developers is proving to be a highly unsuitable approach for assessing and managing cumulative impacts. Concerns over the profound damage to the environment and livelihoods, as well as actual geological structural damage to villages caused by the new hydropower wave, are mounting. Regular community protests against the development of Shuakhevi and Khudoni in particular emphasise the need for a strategic hydropower masterplan and stringent environmental regulations.

In the run-up to this year’s annual meeting in Tbilisi, the EBRD has taken to social media, via the hashtag #Georgia15, to invite Twitter users to share “beautiful photos of Georgia with a global audience”. Here is Bankwatch’s slightly different contribution. 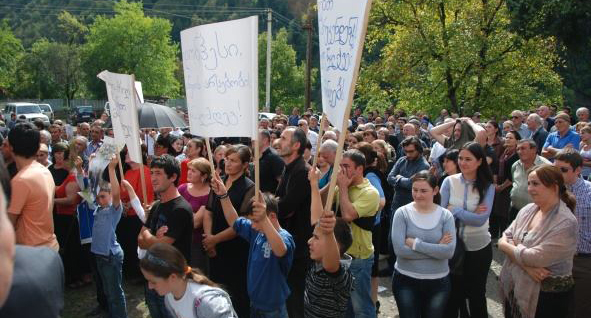 With its strategic location at the borders with Turkey, Russia and Azerbaijan, Georgia has an increasingly pivotal role in EU energy security. For ten years now Georgia has been a transit country for the Baku-Tbilisi-Ceyhan pipeline that carries Caspian oil to the European market, effectively avoiding Russia. It may also host a section of the Southern Gas Corridor planned to transport gas from the Shah Deniz fields in Azerbaijan to the EU.

The EU’s objectives for the integration of Georgia have been clearly spelled out since the inception of the Eastern Partnership framework in 2009, namely: “enhancing co-operation in the fields of energy, transport and environment contributing to energy security and supply diversification needs for the EU”. This initiative reached a milestone in 2014 with the signing of the Accession Agreement and the launching of negotiations for Georgia’s accession to the Energy Community.

The EU- and international development bank-backed development of large Georgian HPPs and transmission infrastructure is thus in lockstep with the notion of turning Georgia into a regional electricity trader and a transit country closely integrated with the EU market. Geopolitics are also crucial here: the energy co-operation is part of broader efforts to diminish the influence of Russia and bring Georgia closer to the EU.

Located at the borders with Turkey, the Shuakhevi HPP and its connecting transmission infrastructure are vital planks in the plans to export Georgian electricity to its southern neighbour’s market. Shuakhevi and the other plants in the Adjaristsqali cascade have guaranteed access to the Black Sea transmission line that connects the Georgian and Turkish grids and facilitates energy exports. Not suprisingly, this transmission line was also financed by the EU, the EBRD, the European Investment Bank and Kreditanstalt fur Wiederaufbau.

It all adds up for western planners and financiers. The final bill for the Georgian population and environment, though, is still a long way from being finalised.