A case of outrageous bad fortune, or a portent of things to come? The one thing that can be stated with any certainty about the collapsed Castor project, the underground gas storage plant in Vinaròs, Spain that was selected in 2013 as the lead-out project for the EU’s Project Bond Initiative (PBI), is that the Spanish government has put its citizens on the hook to cover a compensation package of EUR 1.35 billion to ESCAL UGS, the project promoter.

The announcement of the compensation package in September coincided with a visit to the Castor project by participants in the first ‘Toxic Tour’, a three-day educational tour organised by the Network for Energy Sovereignty, a Catalan network formed by diverse social movements, NGOs and individuals that seeks to reclaim energy sovereignty for the public.

Indicative of growing public concern about the type of energy projects that continue to be developed, too often without due public consultation and now with the rapidly emerging risk that public money is expected – if not essential – to bail out projects that fail, the Network for Energy Sovereignty seeks to scrutinise and throw light on who decides on energy infrastructure and who stands to benefit from current energy policy. Taking in a string of other energy ‘black spots’ in Catalonia, the Toxic Tour also aimed to promote alternative clean energies and illustrate to participants the victories of social movements that have stopped projects which posed a danger to the environment and to public health.

The Global NGO network ECA Watch, that campaigns for reform of public finance institutions such as export credit agencies, is also seeking to raise public awareness of sustainable infrastructure opportunities, including in the energy sector, with the recent publication of a new map featuring popular alternative proposals for envisioning infrastructure drawn from Africa, Latin America and Europe.

According to Mónica Vargas of ECA Watch member Observatory on Debt in Globalisation in Spain:

“Infrastructure should be planned paying attention to issues such as: who decides? who benefits? The cases selected for the map show that there are alternative proposals, exemplary because of their ability to respect the needs of all stakeholders instead of just fulfilling capital interests in the north and the south.” 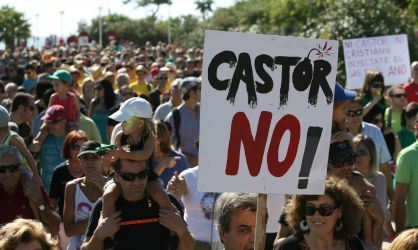 If public awareness and concern over large energy infrastructure developments continues to build – and in their latest IPCC report UN climate scientists underscored the climate change urgency that is now central to infrastructure debates by insisting for the first time on the need for zero emissions from fossil fuel sources by 2100 – then it’s safe to say that public views are being locked out of high level infrastructure discussions.

With the pilot phase of the PBI ending this month and a European Commission evaluation pending, a Commission-requested audit of the first year of the initiative from Ernst & Young published in June this year essentially rubber-stamps PBI as being fit for purpose, with the initiative’s role in the Castor project being viewed as a financial success. The so-called ‘Ad-hoc audit’ conducted by Ernst & Young appears to have resulted in a somewhat ad hoc approach to stakeholder consultation – 13 stakeholder interviews form part of the audit, all featuring industry representatives, with no input from public authorities or NGOs.

This public averse – yet public money reliant – stance is being echoed by wider global initiatives and clamour to plug the multi-trillion dollar infrastructure gap.

Analysing the just launched G20 Global Infrastructure Initiative, Nancy Alexander of the Heinrich Boell Foundation has flagged – beneath the mouth-watering headline investment sums – certain emerging G20 infrastructure preferences: in favour of public-private partnerships (PPPs) over conventional financing of public works; in favour of mega-projects over ‘appropriate scale’; in favour of massive scale-up of PPPs versus a trial-and-error approach; against setting limits on how much public money should offset risks of private firms; in favour of creating an infrastructure ‘asset class’ for developing countries; against binding environment, social and gender safeguards; against adequate consideration of climate-related impacts, even though the G20 Initiative focuses on energy, transport and water sectors, and; against transparency, participation, and accountability in the scale-up of the G20 Global Infrastructure Initiative.

Back to Bankwatch Mail 61