Local development and investments in resource extraction rarely go together hand in hand. Bankwatch’s Media coordinator David Hoffman reports back on a recent visit to the EBRD sponsored Patos Marinza oil field in Albania. The case provides valuable lessons for the current revision of the EBRD’s safeguard policies.

I first visited Albania in 2007. I went there to dig a bit more into a thermal power plant financed by both the World Bank and the European Bank for Reconstruction and Development near the coastal town of Vlore, a popular tourist destination. In spite of fierce opposition from locals and formal grievances lodged with the investors (pdf), the power plant was constructed anyway, and now sits unused, collecting cobwebs and interest on the country’s outstanding debt repayments. Seven years on, this bank touted state-of-the-art plant is said to be still undergoing testing. 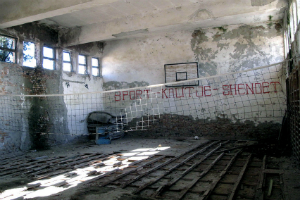 The original blog post on which this article is based contains a slideshow of images and video footage from the project area.

The Patos Marinza oil fields cover 178 square kilometres and have been in production since 1930.

EBRD and IFC have each provided the following amounts:

Things have changed rapidly, though, in and around Vlore: haphazard construction continues unabated, with once towering beachfront hotels demolished to make way for equally large, yet apparently unused, condominiums. The shift, I was told, coincides with the shifting political landscape and the subsequent patronage to the favoured property developers of the moment.

But the more things change, the more some things stay the same. Fast forward more than half a decade, and both the EBRD and IFC are at it again, financing another controversial energy project near Vlore: the extraction of oil at the Patos Marinza fields by the Canadian company Bankers Petroleum.

Patos Marinza is one of the largest, and oldest, onshore oil fields in Europe. Oil was first discovered in 1928 and, because of this long history of extraction, the area around Patos Marinza suffers from heavy pollution. That’s why a portion of the loan from the banks is intended to clean up the area – and typical of the EBRD, its loan is called the ‘Patos-Marinza Environmental Remediation and Development’ project, even though just USD 6 out of 100 million extended to the company is to be used for remediation, and hardly any of that has even been drawn.

Our visit revealed that while Bankers had done quite a bit to improve its facilities for extracting oil, it wasn’t immediately clear what was being done to benefit both the environment and the locals living in the immediate proximity of the oil wells.

Just as in the case of the power plant at Vlore, locals have lodged a formal complaint at the World Bank, alleging among other things that Bankers drilling activities have led to increased seismic activity. An investigation by the IFC’s Compliance Advisor Ombudsman is ongoing, and, in the meantime, a formal working group has been established to investigate the source of the increased seismicity.

But what struck me most about the attention being paid to issues happening underground (and, for the most part, unseen) was the conditions it created for inaction on the very visible unemployment and pollution blighting the residents of Patos Marinza – issues that residents repeatedly raised during the trip.

And if Bankers security had had its way, the issues would have remain unseen: shortly after arriving, we were unwelcomingly escorted out of the area by a caravan of security vehicles.

Prior to the heavy-handed guards removing us from the villages, we spoke with about 20 residents in the nearby village of Kallmi, all of whom were unemployed. A former employee of the state-owned oil company Albpetrol, from whom Bankers is taking over the oil fields, explained that men who had technical training and worked in the fields could not find work with Bankers, complaining that ‘hundreds’ had sent CVs not only to Bankers but also the different subcontractors building related infrastructure such as roads.

When it was noted that Bankers has a hiring policy in place to give preference to former Albpetrol employees, the man dismissed it, reiterating that he didn’t know of any former colleagues now employed by Bankers. Another migrant worker explained that, upon returning from Greece, he had nowhere to send his children because the school was in such disrepair.

He referred to his arrangement with Bankers, where he rents the company land of oil extraction, and they in turn teach him how to care for tomatoes. The programme is of little use, however, since the man already knows how to care for tomatoes, and he no longer has any land on which to grow the tomatoes. Along with other projects deemed inappropriate, such as the recently-constructed health centre and a programme for pruning trees, what the community wants and what the company constructs are entirely two different things.

There is no god that could live here

Even after just a few hours on site at Patos Marinza, the effects of breathing polluted air were noticeable: discomfort in the throat, a slight irritation resulting in eyes watering. For those who call the area home, the situation is taking its toll.

Locals in Kallmi complained that there are significant amounts of air pollution, particularly early in the morning, and in the neighbouring village of Jagodina, other residents confirmed recurring ‘heavy’ air in the mornings, leading to problems with breathing. Locals say that an inoperable pipeline leaks methane, and that the slag pits evaporate in the summer, further deteriorating the air quality. EBRD project information states that “Bankers has plans to implement a sludge treatment plant and plans to empty the sludge currently contained in the unlined sludge pits once this facility is in place. Following the development of a sludge treatment plant the sludge pits will eventually be emptied and remediated.”

When asked about the conditions of the slag pits, one man alluded to an Albanian saying, ‘There is no god that could live there’.

Lessons learned for future ‘environmental and social’ lending at the EBRD

Colleagues from Albania who were present during our trip to Patos Marinza presented our findings in late February at a public consultation meeting held in Sofia concerning the current review of the EBRD’s environmental and social policy. Hopefully the Patos Marinza case will provide some lessons learned for the bank as it moves forward in revising and finalising its new policy in the next couple of months. Otherwise it is possible that the next trip to Albania will be to visit another environmentally and socially-destructive EBRD energy investment.