Home > Publications > Polish shale gas – a watery grave looms, but for who?

Polish shale gas – a watery grave looms, but for who?

To date the efforts of the Polish government to ‘radically accelerate the fieldwork’ required for the exploration, testing and extraction of hydrocarbons – namely shale gas – echo the determination of previous US governments, which suspended as many as seven legal acts in favour of the development of the unconventional gas (the most notorious being the exemption of fracking fluids from the US Clean Water Act, the so-called ‘Cheney loophole’). However, in an EU country, such efforts are necessarily contingent on European Community law.

In one crucial area alone, Poland must face up to pending implementation of the Water Framework Directive (WFD) that obliges EU members to introduce special programs of surface and ground water protection by 2015. These programs may put a further dampener on the already weakened appetite of extractive companies as the country’s crucial water supplies – the Main Underground Water Reservoirs (MUWR) – cover the majority of Poland’s shale gas licensed excavation sites (see map below).

For Poland, the introduction of water quantity and quality protection programs is crucial, since its water supplies are scarce. Compared to other EU countries, only the Czech Republic has lower water supply volumes than Poland – per capita, Poland is three times lower than the European average. Insufficient quantity is not the only problem. According to Poland’s Main Inspectorate of Environmental Protection, “In 2006 there was no high quality water at all, and the quality of over 63 percent of supplies was inadequate or low.”

Therefore, one of the challenges set by the European Commission for Poland while implementing the WFD is the protection of national underground water reservoirs from quantitative and qualitative degradation. In practice, this means the creation of protected areas for MUWR, viewed officially to be of strategic importance for the country’s water management.

Due to their high water quality and availability, MUWR are highly regarded as water-bearing systems. A six year programme, to be realised by the National Geological Institute, has been introduced to document protected areas for 116 MUWR across Poland. MUWR’s protected status is hoped to be enshrined in law by 2015, and an inevitable result of the introduction of new regulations for the Water Law would be serious limitations for the exploration and exploitation of shale gas.

This number of boreholes accounts for more than half of all completed boreholes to date. Taking into account the estimates of the ministry of environment that state that more than 300 boreholes will be made by 2021 to evaluate the size of gas deposits, the scale of the threat to water quality looks set to grow. 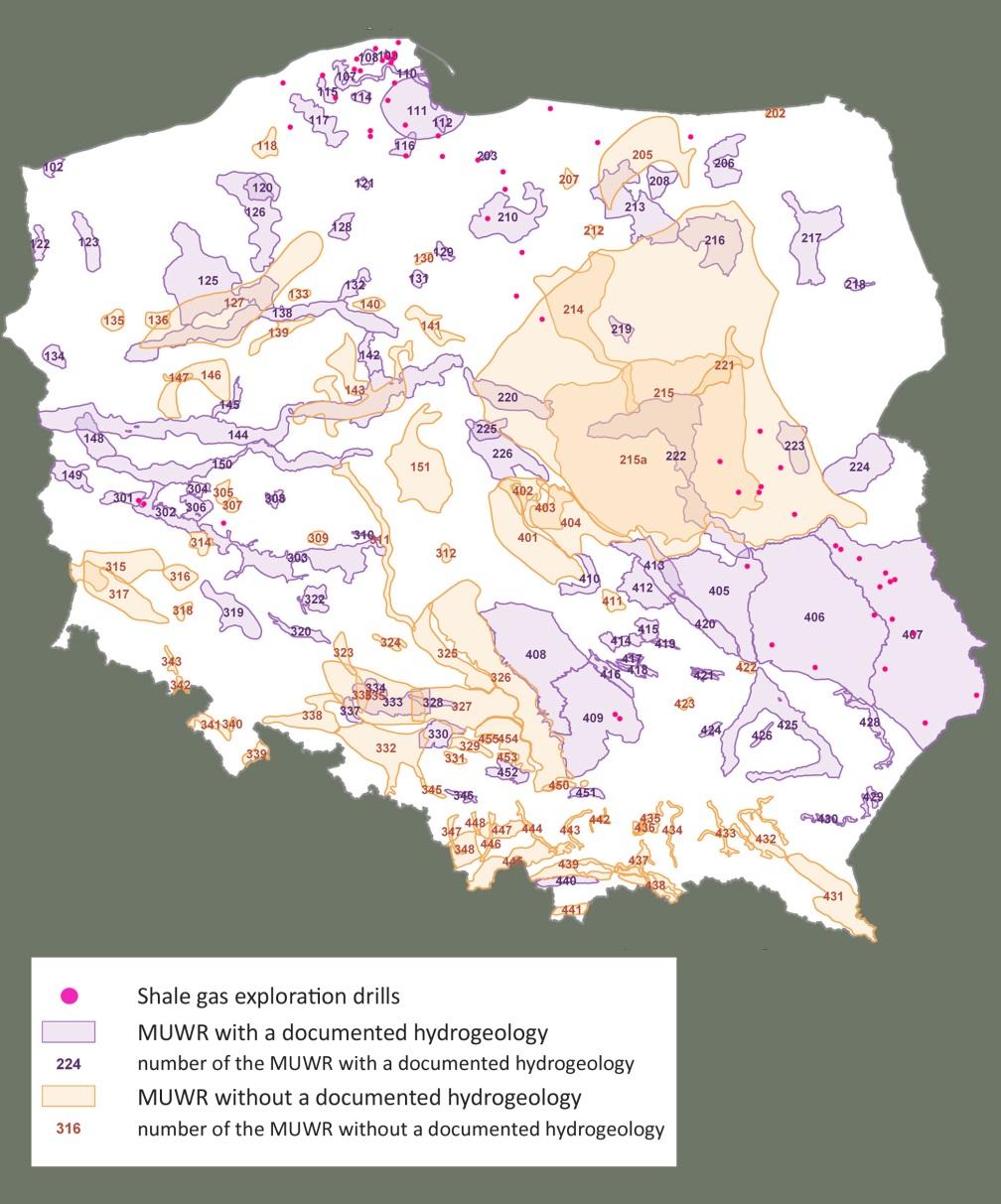 Water and shale gas can mix, say some

“During the exploration and identification of shale gas deposits the Ministry prioritises the highest standards of environmental protection and the safety of the population.”

Similarly, when it comes to MUWR, the ministry of environment tends to chime with the views of the companies:

“The existence of MUWR does not interfere with shale gas search and reconnaissance activity. The security of MUWR is ensured by technology used in exploration and extraction. It guarantees protection of drilling by a system of sealed, shielded piping which prevents any contact with underground water reservoirs and their contamination.”

Yet, reports and information based on hydraulic fracturing – ‘fracking’ – experiences from around the world are testimony to the total lack of guarantee attached to the fracking technique and process. Leaky drilling and wellhead integrity are among the risks to underground water sources that can result in, and has already, water contamination by toxic fracking substances.

And if they don’t mix well?

It is estimated that shale gas exploitation in Poland could – if it goes ahead fully – last for 25-30 years. Yet there are serious concerns related to how the government has caved in to the drilling companies, significantly permitting them to pull out without consequences as soon as extraction ends.

Such a situation is possible on account of the legal character of the companies operating in Poland. All of them, with the exception of PGNiG, are daughter companies of the major extraction giants and are operating as limited liability companies, likely to be dissolved once shale gas exploitation in Poland is over. Current Polish legislation obliges the enterprise or its legal successor to pay for damage to the environment resulting from the extraction of fossil fuels and other minerals. Should neither the enterprise or its successor exist, the responsibility for remediating or compensating for potential accidents or damage rests with the Ministry of Treasury and the legal or physical person holding the legal title to the land, effectively meaning taxpayers and local communities.

The latest report of the Supreme Audit Office leaves no illusions about the current monitoring of shale gas operations being performed by Polish inspectorates – out of 34 audits carried out by the State Mining Authority (responsible for shale gas), only one concerned shale gas excavation issues.

Moreover, according to unofficial information obtained by Polish TV station TVN24 in May 2013, the drilling cement work being done in Poland is faulty. The main issue is the cement itself, used to support drilling wells and which does not withstand the ‘fracking force’ of pumping substances inside it.

The problem is viewed as serious as it concerns all excavation companies operating in the country. The Supreme Audit Office has identified negligence, and if such continues to prevail in this kind of extraction industry, the consequences could be disastrous.