Pljevlja’s 210 MW lignite power plant, operating since 1982 in northern Montenegro, has caused controversy since the beginning of its lifetime. Even back in late ’70s Yugoslavia when the project was being planned, residents succeeded in pressing for the chimney to be taller than planned (250 metres instead of 200 metres) in an attempt to ensure that the plant’s pollution rose above the hills surrounding Pljevlja and dispersed further away.

Unfortunately it didn’t work. Pljevlja’s location in a depression surrounded by hills at around 760 metres above sea level makes it highly prone to smog. To make things worse, initial promises to incorporate district heating into the power plant – in order to minimise the need for households to burn lignite – were not kept. So residents now have the worst of both worlds: a power station pumping out health-damaging pollutants, but which does not even heat their houses.

Nor are the town’s chimneys the only source of air pollution. The massive Jagnjilo spoil tip, consisting of an estimated 70 million tonnes of marl waste dug out from the lignite mine causes dust to blow around on windy days, as does the Maljevac ash pond, which is often not adequately dampened with water. People in Pljevlja complain of a high rate of illness, especially in the village of Zbljevo next to the ash pond.

The pond is also just a few metres from the nearest houses and the dam holding back the ash appears to be in danger of failure; stabilisation works have been ongoing but people living just metres away downstream have been refused compensation that would allow them to move.

South-eastern Europe is riddled with poor planning and corruption in the energy sector and its governments are proving slow to react to the challenges and opportunities offered by the decarbonisation agenda. 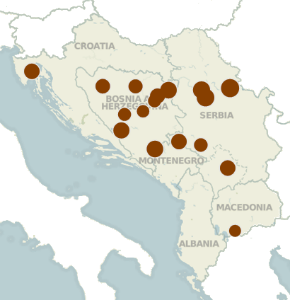 There should, in theory, be a light at the end of the tunnel, as Montenegro’s commitments under the Energy Community Treaty mean that the existing plant should either close by 2018, undergo further retrofits to bring it into line with the EU’s Large Combustion Plants Directive, or continue to run but only for a maximum of 20,000 hours, spread over an as yet undefined period.

However, there are two ‘buts’. The first is that the Montenegrin government has been far from clear about whether it is actually planning to close the plant on time. Some documents say 2025, and the country’s draft Energy Strategy even mentions 2030. The second ‘but’ is that the government and its partly state-owned electricity generation company EPCG are bent on constructing a new 220 MW unit at Pljevlja.

The new unit is at an early stage of the permitting process and does not yet have an environmental permit, but a lively – if rather lacking in firm criteria and deadlines – procedure is ongoing for the selection of a company to construct it. Of nine companies which submitted preliminary offers, there are now three shortlisted – China’s CMEC, Powerchina Hubei Electric Power Survey & Design Institute and Skoda Praha, a CEZ subsidiary from the Czech Republic.

Once a company is finally selected, the plan is to make an intergovernmental agreement with the country’s government and approve a special law in Montenegro to ratify it, and hey presto – the Montenegrin government says that this means it does not need to conduct a regular tender process.

As well as the selection procedure for choosing the company, there are an abundance of other issues raising concerns. First of all, it is unclear whether the plant is really needed. With production at Montenegro’s beleaguered Podgorica Aluminium Plant KAP greatly diminished and the future of the plant in doubt, Montenegro’s future electricity demand has decreased. This makes it all the more questionable whether it is reasonable to risk Pljevlja residents’ health for the sake of energy for export.

Greenpeace and the University of the Stuttgart have carried out a predictive analysis of the impact of the planned thermal power plant on people’s health, based on the technical parameters for predicted emissions provided by the government. The results show that the new unit could cause 16 premature deaths per year, or 622 premature deaths over the lifetime of the plant, with a total of 160 years of life lost.

The reality might yet be even worse, as several of the offers made for Pljevlja II are not even in compliance with the parameters set out by the Montenegrin government for emissions and efficiency level. As of 2018 all new power plants in the countries covered by the Energy Community Treaty, including Montenegro, must comply with the EU’s Industrial Emissions Directive. As power plants take several years to build, in practical terms this means that they must comply already now during the licensing phase.

Yet while all the shortlisted companies claim to offer technology which meets EU standards, according to information published by the Montenegrin government in July 2013 about the offers, only one of them in fact does. Moreover, none of them are compatible with the EU’s Best Available Techniques provisions on thermal efficiency, meaning that for the same amount of energy, more fuel must be burnt and therefore more pollution is produced overall.

This is a common problem among planned lignite plants across the region and it is now to be hoped that the Energy Community and EU institutions will take an active role in ensuring that sub-standard plants are not built now only to have to be retrofitted in a few years.

As well as having ample scope for improving energy efficiency, mainly by decreasing the use of electricity for heating and cooling, Montenegro offers significant potential for both solar and biomass energy.

According to the country’s draft Energy Strategy, the theoretical potential of solar radiation is estimated at about 20 PWh/year in the country as a whole. For wood biomass, the Pljevlja area offers particular opportunities, though sustainable forestry must be a precondition for any such activities. According to the draft Energy Strategy, waste from the wood processing industry alone currently amounts to an equivalent of 262 GWh per year in Montenegro currently.

If the country really wants to prove that it is a worthy candidate for EU membership, and an ‘ecological state’ as its national constitution claims, it is time for Montenegro to clean up the legacy of its old energy and industrial facilities, consign lignite to the dustbin of history, and make use of its extensive energy efficiency and renewables potential.