3 out of 4 experts gave a negative opinion on the environmental study of the Ombla hydropower plant. Now the Croatian government must heed their warnings and stop the project. 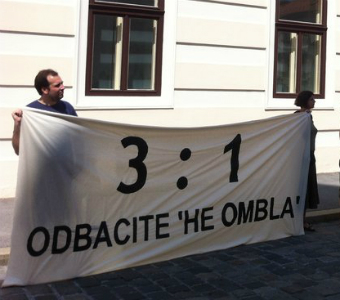 Implicated in a political scandal, during the last few weeks the EBRD-financed Ombla hydropower plant has suddenly become the centre of attention in Croatia.

On 8 June the Minister for the Protection of the Environment and Nature, Mirela Holy, resigned, ostensibly because of a scandal involving her sending an e-mail to Croatian Railways connected to the wife of a party colleague’s work position. But considering the e-mail was sent three months previously, many media and civil society observers pointed out that the timing of the revelation was quite a coincidence considering that Holy’s Ministry was about to decide on the fate of several controversial infrastructure projects including Ombla and the new Plomin C coal power plant in Istria.

On the day she resigned, Holy also announced the long-awaited results of an independent review that she had commissioned of the 1999 Environmental Impact Assessment for the Ombla project. Out of four experts who reviewed the study, three assessed the study as being inadequate, with the fourth giving it conditional approval. No more details are known as yet as the government has failed to publish the expert reviews, in spite of promises.

To fan the flames a bit more, Deputy Prime Minister Radimir Cacic, far from promising to give the results adequate consideration, made dismissive comments on the review on the grounds that they had been done for free, which in his view made them automatically suspicious. With comments like “Enough of this kindergarten” and “Ombla’s going ahead, Plomin’s going ahead” during the last week and a half he has made it very clear that he has little idea about the fact that even if the government for some reason does not stop the Ombla project now, it still has to be subjected to a nature impact assessment.

Today Green Action held a press conference outside of the government’s building in Zagreb calling on Prime Minister Milanovic and the new Environment Minister Zmajlovic to heed expert opinion – rather than Cacic’s gung-ho remarks – and cancel the project.

It remains to be seen how the EBRD, which approved a EUR 123 million loan for this project last November before it was anywhere near clear that the project would comply with EU environmental requirements, will now react. It was bad enough that a bank that claims to promote EU law approved the project on the basis of a 1999 environmental impact assessment, but it can hardly afford to ignore an independent review that has given such a clear thumbs down to the environmental study.