In the age of fake news, providing fact-based arguments in environmental campaigns is crucial. Bankwatch has reached out to the technology-savvy community, to bring more robustness to the narrative. 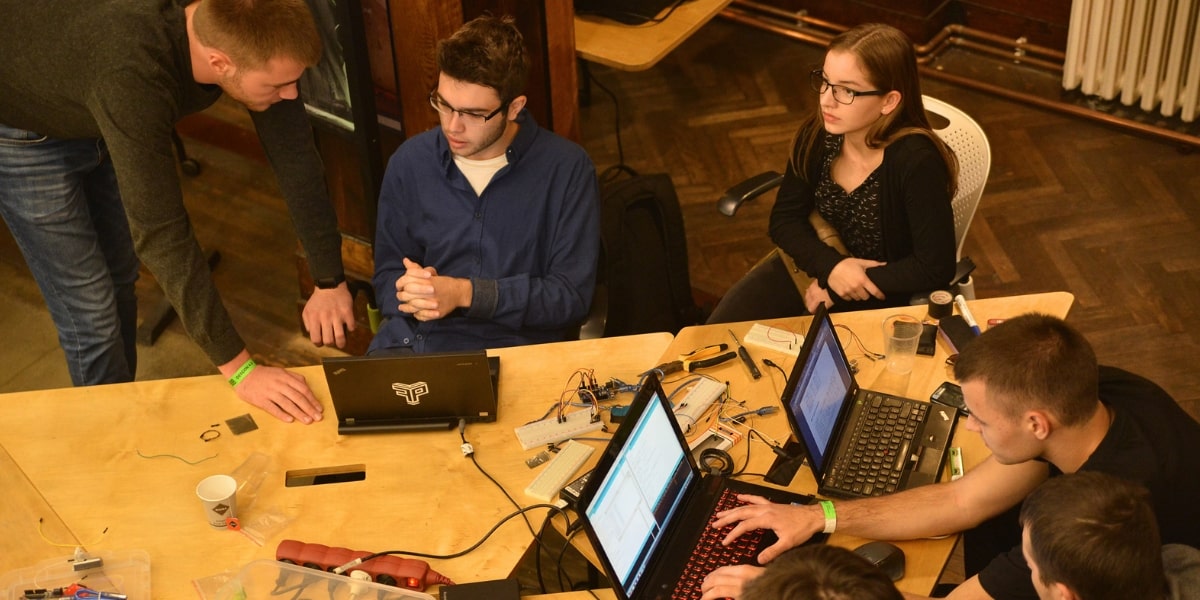 DESCON 4.0 The fourth 48-hour annual community and capacity building event focused on the security of the Internet of Things, robotics, electronics and wearables. This year special challenge topic was Climate Warming and Pollution and can Internet technology assist in its prevention. Impact Hub Belgrade, Makedonska 21, Belgrade © 2018 ph: vladimir opsenica

This is relevant to our campaign against destructive hydropower in the Balkans where the lack of baseline data about potential dam sites is chronic and can jeopardise immense local biodiversity. It is also relevant to our efforts in moving the Balkan region beyond coal, where public authorities intentionally fiddle with data on air pollution.

Last week we participated in DesCon 2018, a collaborative hi-tech event on the so called Internet of Things (IoT) that this year was focused on global warming and pollution monitoring.

Our idea to monitor environmental flows of small hydropower plants was voted second at the competition organised as a part of the conference, in which five other software or hardware tools entered. The proposed device should provide continuous monitoring of the quantity of water discharged from small dams, a crucial element in preserving ecosystems downstream.

The international team developed the first blueprints of the monitoring device. One team participant, Jari Arkko, was attracted to the idea as he is an avid cave researcher, where water flow measurements are also very relevant. The team has developed a series of scripts to grab publicly available data on electricity production from official sources and use it to calculate water intake by hydropower plants. This will serve as a control variable to monitor the actual discharge from the dams.

The challenge was to scrape the data on electricity production from governmental databases. Open data formats are a rarity in the Balkan countries, the information is scarce and spread around obscure PDF files. And that is if you are lucky enough to find it online. Most of the times information is available only upon request, and yet again not in the machine-readable form. This is hampering citizen’s access to information, a staple of any meaningful civic participation, including involvement in developing a sustainable renewables sector sensitive to water scarcity due to climate change impacts.

The idea to create such a monitoring device was inspired by Bankwatch’s independent air pollution monitoring campaign carried out in the last two years in the Balkan region.  On DesCon Ioana presented some of the highlights of this work.

Our air pollution monitoring offered the first ever observations regarding a pattern of daytime/ nighttime emissions in Tuzla, Bosnia and Herzegovina, indicative of potential switching off of pollution controllers at the local coal power plant. It also produced some jaw-dropping findings in the village of Rosia de Jiu, Romania, where dust particles originating from coal facilities have been up to 30 times the EU limit.

Independent monitoring of air pollution throughout the region has been instrumental in providing local communities, exposed to such alarming levels of pollution, the evidence that official monitoring stations are failing to collect. In most Balkan countries, the national system of monitoring is insufficiently spread, the data is not collected continuously, nor displayed in real time and most of the coal-polluted hotspots are not even being monitored.

It was, therefore, no surprise that the first prize of the DesCon 2018 contest went to a team who built a PM2.5 sensor, which is cheap to produce and easy to carry and map the air quality in certain locations.

Such devices should not absolve the environmental authorities of performing official measurements, but they can be pivotal in determining the sources of pollution in a certain location which makes it then easier to propose remedial measures adapted to the local context.

Climate change and environmental destruction are not easy challenges. They require unconventional approaches and innovative solutions. Ioana and Igor burst the NGO bubble by joining the DesCon crew, and discussing environmental issues with a diverse community. And had a lot of fun. Some  hacking is indeed going to be needed to change the status quo. “One hack at the time” as the motto of the DesCon conference goes.