With hydropower and mining projects encroaching on their lands and livelihoods, Svan communities in Georgia’s northwest consider convening in an ancestral assembly to discuss their course of action. 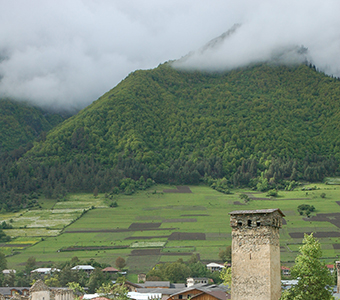 Georgia’s indigenous Svans, an ethnic subgroup in Georgia’s Caucasus mountains with their own language, laws and traditions, are considering restoring a traditional council to debate energy and extraction projects that are set to disturb their ancestral lands. A decision is expected for July 3 to establish the Svan assembly – lalkhor – to discuss the ownership of customary lands that are under threat from mining exploration and massive hydropower developments planned on the Enguri river and its tributaries.

The proposal to re-establish the traditional lalkhor was made at a closed meeting of Svan elders on June 12 in Khaishi, the gateway to Upper Svaneti, a beautiful mountainous region roughly the size of Mallorca that is largely covered by a planned national park. Representatives of 17 villages want to resort to the long abandoned tradition to respond to the growing pressure on their lands. A Svan assembly, so their hope, would increase their impact on the decision making over their region’s development and help contest the Georgian government’s, investors’ and international lenders’ neglect of engaging locals.

Living in isolation on the southern slopes of the Caucasus mountains, generations of ethnic Svans have depended on the customary lands they have used for subsistence farming, livestock grazing and forestry. Arguing that the loss of ancestral land would mean the loss of their culture and livelihoods, Svans have taken a firm stance against the threat of economic displacement caused by large-scale infrastructure development.

For nearly ten years, Svans have struggled to defend their lands from flooding by the planned Khudoni dam that would displace approximately 2000 people. Most recently, Svan communities protested against a gold mining project in the village of Eli and against the 280 MW Nenskra hydropower plant in Chuberi and Nakra. The protest against the Nenskra dam resulted in the arrest of eight people by special police forces. The project is currently considered for financing by multiple international lending institutions including the European Neighborhood Investment Facility, the European Investment Bank, the European Bank for Reconstruction and Development and the Asian Development Bank.

In a common position that participants agreed upon during the meeting in Kaishi, the Svan elders announced their categorical no to the Khudoni hydropower plant and demanded that local communities are consulted before any new energy project is proposed in the region. They also declared that the development of the Upper Svaneti region should explore eco-tourism, promote agriculture, small enterprise and contribute to the development of community-based renewable energy schemes instead of large hydroelectric plants. 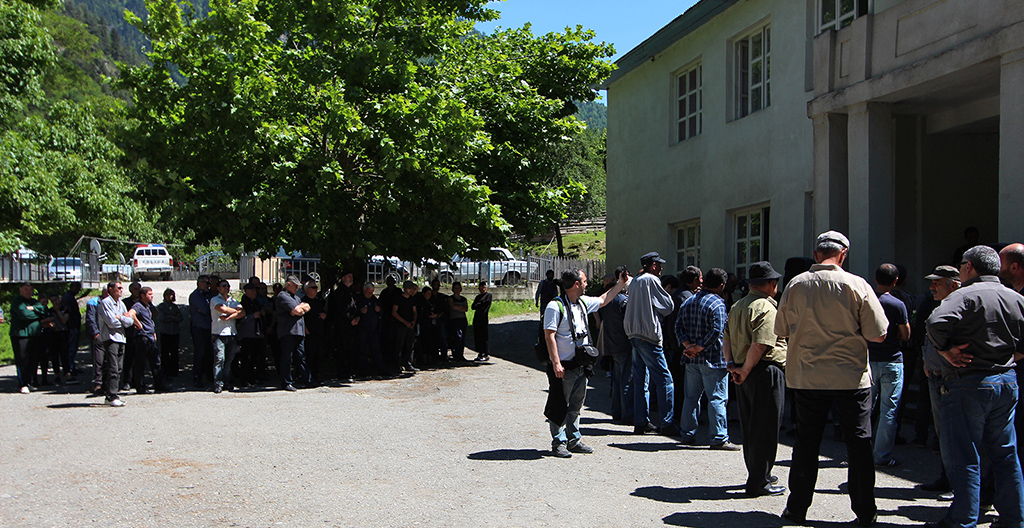 People in Khaishi gathering while the meeting’s outcomes are announced (June 12).

As many as 35 hydropower plants could be built in the next years in Upper Svaneti, an estimate made on the basis of feasibility studies, concessions and memoranda of understanding awarded by the Georgian government. About 27 of these are large hydropower plants whose capacity exceeds 10 megawatts. The locals claim the massive scale hydropower development would have serious ecological consequences and inflict irreversible damage on their traditional livelihoods.

In the villages of Chuberi and Nakra, families have already seen their property degraded by preparatory works on the Nenskra dam, including drilling and construction of access roads. For many of the families, grazing is a vital source of subsistence as their households have no stable income apart from elderly people’s pensions.

It is no wonder then that protests continue and local opposition is becoming more persistent with every passing day. Authorities and financiers must take heed of locals’ demands if only to avoid further escalation.